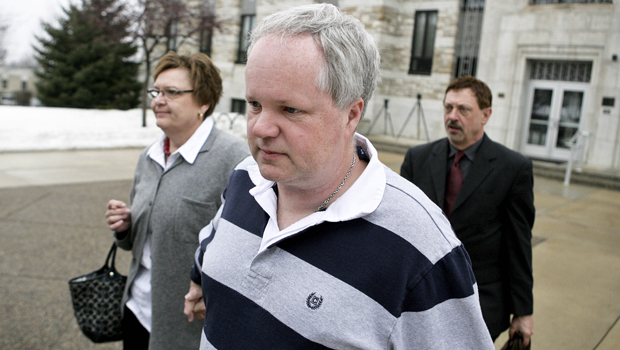 MINNEAPOLIS -- The Minnesota Supreme Court on Wednesday reversed the convictions of a former nurse accused of encouraging two people whom he met online to kill themselves.

The court ruled that the language in the state's assisted-suicide law that pertains to "encouraging" suicide is unconstitutional. However, it upheld the part of the law that bans "assisting" suicide.

Since a lower court judge did not rule on whether William Melchert-Dinkel "assisted" in the suicides, the case was sent back to a lower court for more proceedings.

His 360-day jail sentence had been on hold pending the outcome of the appeal.

Melchert-Dinkel, 51, was convicted on two counts of aiding suicide in the deaths of two people: Mark Drybrough, 32, of Coventry, England, who hanged himself in 2005; and Nadia Kajouji, 18, of Brampton, Ontario, who jumped into a frozen river in 2008.

His attorney argued that he was exercising his right to free speech, and that the law - which states that anyone who "intentionally advises, encourages, or assists another in taking the other's own life" is guilty of a crime - was too broad.

In addition to his free speech claim, Melchert-Dinkel argued that he had no influence on either person's actions. But prosecutors say his speech wasn't protected and that he played an integral role in the deaths, including giving step-by-step instructions.

Evidence showed that Melchert-Dinkel sought out depressed people online. When he found them, he posed as a suicidal female nurse, feigned compassion and offered instructions on how they could kill themselves.

Melchert-Dinkel told police he did it for the "thrill of the chase." According to court documents, he acknowledged participating in online chats about suicide with up to 20 people and entering into fake suicide pacts with about 10, five of whom he believed killed themselves.

An appeals court panel ruled in July 2012 that the state's assisted suicide law was constitutional, and that Melchert-Dinkel's speech was not protected by the First Amendment.

But in a case involving members of the Final Exit Network, a different appeals court panel ruled that the state's law was unconstitutional when it comes to "advising" or "encouraging" suicide. The Florida-based group was accused of playing a role in the 2007 suicide of a Minnesota woman, but the case was put on hold while the Supreme Court considers Melchert-Dinkel's appeal.