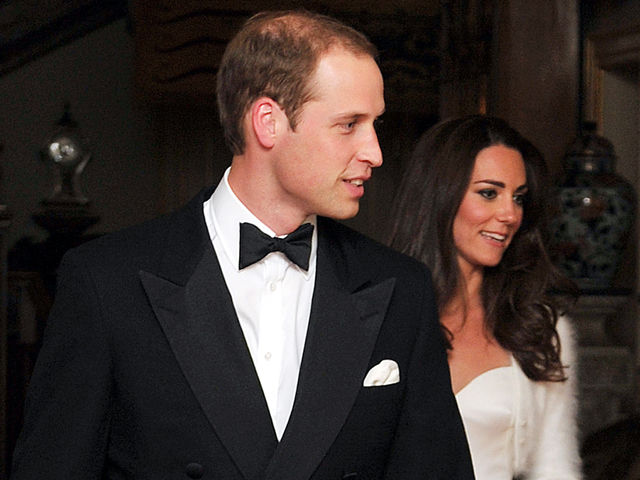 LONDON - With not one but two kisses and tender whispered words, Prince William and Kate Middleton smiled and blushed Friday as they started their life as future king and queen. A day of seamless pageantry inspired hopes that this royal couple might live happily ever after.

Even in the grandeur of Westminster Abbey, where royals are crowned, married and are buried, this was the un-stuffy wedding, CBS News correspondent Mark Phillips reports. William arrived early so he could schmooze with the guests. Best man Prince Harry kept his brother loose as they waited for the bride.

They appeared at ease throughout their wedding day, with William fighting back giggles at times, while Kate's smile lit up television screens, especially when her new husband leaned over to say, "You look beautiful."

Their intimacy stood in sharp contrast to the lack of chemistry between a wooden Prince Charles and Diana Spencer 30 years ago when they began a marriage that ultimately collapsed in embarrassing tabloid headlines and turned many Britons against the monarchy.

A million people lined the procession route from the abbey to Buckingham Palace, many crying with joy. Cheers went up as the couple exchanged the traditional kiss on the balcony, followed by chants of "One more kiss!" The couple waved and smiled and, to a frenzy of delight, obliged.

An estimated 2 billion people tuned into the live broadcast in what may have been the most-viewed event in history.

The security operation was the largest since Charles and Diana's 1981 wedding, and the day went off without a hitch. Police dispersed scattered protests from anti-monarchists and anarchists and arrested 55 people for offenses including drunkenness, breach of peace, and theft, but the mood was overwhelmingly celebratory.

"Everybody's happy, everybody's united," said 61-year-old Sabry Darwish, who was in the crowd watching the parade route. "Everybody is behind the bride and groom."

Many praised the couple's rare combination of humility, humor and grace. Kate was a commoner from a wealthy but middle-class family who actually worked for a living after university; William has long had his mother's touch in connecting to the public, and surprised fans who slept on the pavement overnight by personally thanking them Thursday for braving the cold.

The 28-year-old prince even displayed a quality almost never seen among royalty: humor. Surveying the 1,900 guests filling the abbey in their wedding finery, he turned to his father-in-law, Michael Middleton, and quipped: "We're supposed to have just a small family affair."

Then after a reception at Buckingham Palace, he took his new wife for a spin, driving a dark-blue Aston Martin Volante festooned with ribbons, bows and balloons — and a license plate that read "JU5T WED." (Watch at left)

It was the kind of display that made some wonder whether the couple just might bring the British monarchy back from the abyss.

"It's a real turning point for the royal family," Nicki Hookings, 47, said at one of thousands of street parties across Britain to celebrate the national holiday.

For much of the world, the wedding was a dramatic reaffirmation of 29-year-old Kate's beguiling star power. Despite the pressure, she carried the day with an easy smile, youthful exuberance and a sense of decorum that matched the event. And when it was over all over, she curtsied easily before Queen Elizabeth II, comfortably sharing the stage with the woman who has reigned since 1952.

Crowds from Australia to Zimbabwe clasped Union Jack flags and donned hats — and wedding gowns — to show their enthusiasm.

"It's one happy event in the world right now," said San Francisco attorney Laura Claster, who traveled to London to be with the crowds. "It gives us a day of celebration to forget the troubles in the world."

In a statement, the White House offered congratulations. "On this occasion, the American people extend heartfelt congratulations to the peoples of the United Kingdom and the Commonwealth and share in their hopes for a bright future for the Royal couple."

The day was a visual feast for fashion enthusiasts. Guests wore extravagant hats, some costing more than $1,600, but all eyes were on the bride's dress, the best-kept secret of the day.

The ivory-and-white satin gown, with its dramatic neckline, sheer lace sleeves and eight-foot train, was designed by Sarah Burton at Alexander McQueen and reminded some of the wedding dress worn by a princess from another era, the late Grace Kelly of Monaco.

Kate wore her hair down and pulled back from her face, covered with a lace-edged veil and a diamond tiara on loan from the queen. Her dramatic oak-leaf-shaped diamond earrings were a gift from her parents.

William, second-in-line to the throne after his father, wore the scarlet tunic of an Irish Guards officer, reinforcing his image as a dedicated military man. Maid of honor Pippa Middleton wore a simple column dress, while Harry chose formal military attire.

The sighting of the wedding gown prompted swoons of admiration as Kate stepped out of a Rolls-Royce with her father at the abbey. Against all odds, at that moment the sun broke through the steely gray skies.

The long aisle leading to the altar was lined with maple and hornbeam trees as light streamed in through the high arched windows. The soft green foliage framed the couple against a red carpet as they recited their vows flawlessly before Archbishop of Canterbury Rowan Williams.

After a ceremonial drive around London in an open-topped horse-drawn carriage, the couple appeared with the queen and their wedding party on the balcony of Buckingham Palace, where the highly anticipated first — and second — kisses brought screams of delight from the crowd.

It was then that photographers from around the world captured one of the day's most memorable images: As the couple locked lips, 3-year-old bridesmaid Grace van Cutsem held her hands over her ears and scowled as she tried to block the sound of Royal Air Force planes screaming overhead.

Earlier in the day, the queen had bestowed upon the couple their first royal wedding present: the titles of the duke and duchess of Cambridge.

There has been speculation that William, his popularity only enhanced by his new wife, should step ahead of his father to become the next king. Many consider the 62-year-old Prince Charles stuffy and disconnected from ordinary people.

But that's unlikely to happen. Many in Charles' inner circle say he's waited too long to step aside — even for his son.

In Bucklebury, the sprawling village where Kate grew up 50 miles west of London, jubilant crowds filled the streets to celebrate the hometown girl who could be queen. Some of its residents were at the wedding, including the town butcher and baker.

"These are two young people very much in love," butcher Martin Fidler said outside the abbey.

John Haley, owner of the Old Boot Inn who knows the bride from her visits to the pub in the nearby village of Stanford Dingley, said he teared up as he caught her eye during the ceremony.

"It was unbelievable," he said. "It was just fabulous and more than I expected."

The palace was holding two parties: one in the afternoon for 650 guests, and a dinner dance for 300 close friends.

Arriving for the latter, Kate pronounced it a "great day."

"I am glad the weather held off," she said, appearing radiant in a strapless white satin evening gown with a circle skirt and diamante embroidered detail around the waist, another Sarah Burton creation.

Ben Fogle, a friend of the couple and television presenter, said the mood was relaxed during afternoon festivities at Buckingham Palace with "very funny and heartfelt speeches."

The flag went down as the queen and her husband left the palace for the younger royals to party the night away — and for Harry to make his best man's speech away from his grandparents' ears.

It was rumored that Harry planned a "British fry-up" breakfast for those still standing at dawn.

The couple has been living in a modest house in Wales near the base where William serves as an Air Force search and rescue helicopter pilot, and will continue to do so after their honeymoon, which remains shrouded in secrecy. The prince "really is one of us," said Sgt. Keith Best, a paramedic on William's team.