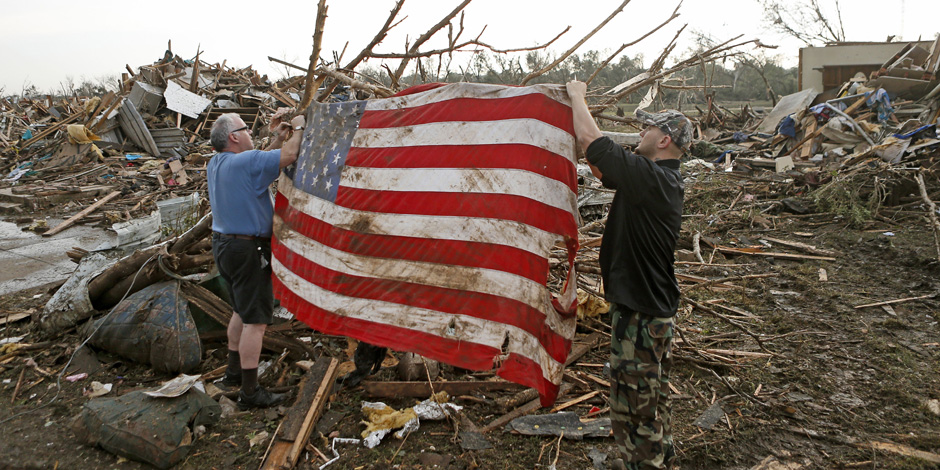 It took three months and a scolding from Gov. Chris Christie, R-N.J., for Congress to approve $50 billion in emergency funding for the victims of superstorm Sandy.

This week, as Oklahoma begins to pick up the pieces following a devastating tornado, lawmakers in Washington are hoping another ugly political fight over emergency relief funds can be avoided.

Early Tuesday, there was already speculation on Capitol Hill about potential votes for emergency funding. In a statement, Sen. Tom Coburn, R-Okla., said that as the top Republican on the Homeland Security and Governmental Affairs Committee, which oversees the Federal Emergency Management Agency (FEMA), "I can assure Oklahomans that any and all available aid will be delivered without delay."

However, Coburn reportedly said he would insist on any congressionally-funded aid being offset with budget cuts elsewhere.

Later in the day, an aide for the senator fended off further questions on the matter, telling reporters it it "crass for critics to play disaster aid politics when first responders are pulling victims from the rubble."

The aide noted that an emergency aid package may not even be necessary, given that FEMA has $11.6 billion in its Disaster Relief Fund.

However, FEMA Administrator Craig Fugate told a congressional panel in March that after taking a nearly-$1 billion hit due to sequestration and making payments related to Sandy and other disasters, FEMA expects to have $2.5 billion in the Disaster Relief Fund by the end of September.

Even so, the discussion over extra funding may be a "moot point," as a spokesperson for Rep. Jim Bridenstine, R-Okla., said, given that the damage may not exceed the remaining funds. While damage is still being assessed, comparisons to Monday's tornado can be made to the tornado that crossed nearly the same path on May 3, 1999.

The 1999 tornado was the strongest ever recorded, clocking in at more than 300 miles per hour. According to various estimates, that tornado caused between $800 million and $1.5 billion in damage.

That's not to undermine the damage this tornado caused -- it killed at least two dozen people, tore apart schools and a hospital, and shut down highways. Still, leaders in Washington Tuesday were reticent to make any assertions about emergency funding, simply promising to deliver whatever aid is necessary.

"In the days and weeks ahead, we're gonna do everything in our power to make sure that the victims of this tragedy have the resources they need," Senate Majority Leader Harry Reid, D-Nev., said to reporters. When asked about the possible need for additional funding, he cited FEMA's disaster fund and said, "Right now, we don't need the money. We'll see what they tell us a little later... If there's more money needed, we're gonna take care of it."

He added, "This is an act of God. And, in the history of this country, we've always taken care of that, and we will again."

Senate Minority Leader Mitch McConnell, R-Ky., similarly said the federal government "will do its part" and determine later whether emergency funding is necessary. "I think the first thing to do is finish the damage assessment, and then we'll figure out what the way forward is," he said.

House Speaker John Boehner, R-Ohio, was asked repeatedly Monday whether the approval of emergency funding should require budget offsets, but he declined to respond. "We'll work with the administration on making sure that they have the resources they need to help the people of Oklahoma," he said.

President Obama on Tuesday promised the administration's "full focus" is on the recovery effort. Fugate traveled to Oklahoma on Tuesday, and Homeland Security Secretary Janet Napolitano arrives there Wednesday.

Even if the response to Monday's tornado doesn't require emergency funding, federal aid for natural disasters is sure to remain a heated subject as Congress squabbles over budgeting.

Oklahoma's two GOP senators, Coburn and Sen. James Inhofe, voted against it, as did three of its representatives, Reps. Bridenstine, Markwayne Mullin and James Lankford - all are Republicans. Oklahoma's two other congressmen, Reps. Frank Lucas and Tom Cole, both Republicans, joined House Majority Leader Eric Cantor, R-Va.; in voting for the funding.

FEMA funding is critical in a state like Oklahoma, where Tornado Alley puts people at risk regularly. This year, Oklahoma has had two disaster declarations. Last year, there were nine disaster declarations in Oklahoma -- the most of any state aside from Washington, which had 10. Inhofe and Coburn have taken heat in the past for voting against disaster relief funding, but both say they're looking out for taxpayers' best interests by keeping pork out of spending bills.

Inhofe explained on MSNBC Tuesday that he voted against the Sandy bill because "they had things in the Virgin Islands, they were fixing roads there, they were putting roofs on houses in Washington, D.C. -- everyone was getting in and exploiting the tragedy taking place." He insisted any aid to his state wouldn't include any waste.

Coburn's aide, meanwhile, told reporters Tuesday that the senator "has opposed disaster aid bills in the past because he believes disaster funding should be used to pay for disasters, not a wish-list of parochial or backlogged priorities that have nothing to do with helping victims."

Coburn even voted against the 1999 Emergency Supplemental Appropriations Act, which would have provided $900 million for tornado disaster relief to Oklahoma, Kansas, Texas and Tennessee. His office told CBSNews.com that there was already money in the pipeline to assist Oklahoma after the record-breaking 1999 tornado, so the emergency spending bill wasn't necessary -- much as lawmakers are predicting will be the case this time around.