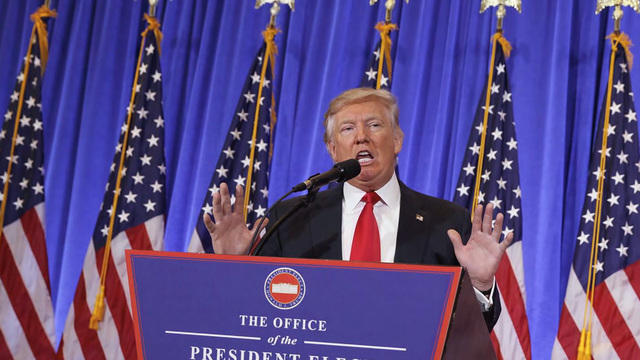 President-elect Donald Trump and one of his lawyers outlined a structure Wednesday that, in their view, separates Mr. Trump’s role as president from his family’s extensive business holdings – but critics say the arrangement falls short of that goal.

Sherri Dillon of Morgan Lewis, a lawyer who has been working on the plan for the Trump business empire, said Mr. Trump’s business holdings and investments will be put in a trust before Inauguration Day, and that his two adult sons will run the company for the duration of his presidency. Ivanka Trump, whose husband Jared Kushner is set to become a senior adviser to the Trump White House, will have no further management role in the company.

Dillon also said there will be “no new foreign deals” made during the duration of Mr. Trump’s presidency, and that domestic deals will be subject to “severe restrictions.” Additionally, a chief compliance counsel position will be created at the Trump Organization to help prevent conflicts of interest.

Mr. Trump and his lawyers opted not to pursue several avenues that could have more thoroughly separated the president-elect from his business. The president-elect could have put his business in a blind trust, for example, relinquishing control of the company to an independent steward rather than to his own children. But Dillon argued that “you cannot have a totally blind trust with operating businesses.” Mr. Trump, she explained, would still be aware of his company’s holdings, and he’d still be able to receive information on those holdings from press reports – hardly a “blind” arrangement.

In the end, under the structure Trump’s lawyers outlined yesterday, it will fall to Trump himself to prevent conflicts of interest. “The key element here is Mr. Trump’s willingness, day after day, year after year, to maintain a hands-off relationship with his sons in terms of the business,” MoneyWatch’s Larry Light explains.

Trump vowed Wednesday to avoid any talk of business with his sons as president, but as Light notes, “[Trump] is famously involved in the smallest item in a new building, down to the color of the drapes. Given that, expecting Mr. Trump to actually wall himself off from talking to his sons about the Trump Organization is asking a lot.”

Another possible solution – the outright liquidation of the Trump Organization – was also discarded by Dillon as impractical, even unfair. Selling the company’s numerous assets quickly would create a “fire sale” in which the organization was forced to sell holdings below market value, she argued. “President-elect Trump should not be expected to destroy the company he built,” Dillon said.

While it has its critics, the structure Trump and his attorney outlined Wednesday is roughly in line with the more-vague parameters Vice President-elect Mike Pence offered in an interview with “Face the Nation” last November.

In it, Pence described Trump’s children as people of “extraordinary capability,” and he said Mr. Trump is “confident they can lead the business enterprise while he puts all of his energies, all of his focus in the people’s business.”

“I’m very confident that the president-elect and his extraordinarily talented family are going to work with the best legal minds in this country and create the proper separation from their business enterprise during his duties as president of the United States,” Pence said. “We will create the proper legal separation, above reproach, as he goes forward. And I promise you… President Donald Trump, after January 20, is going to be completely focused on the people’s business and he will leave his business life in the past.”

Will the structure Trump and his lawyers outlined yesterday keep his administration “above reproach” when it comes to potential conflicts of interest, as Pence promised? We’ll follow up with Vice President-elect on the matter this Sunday, when he sits for an interview with Face the Nation just days before he and Mr. Trump assume office.