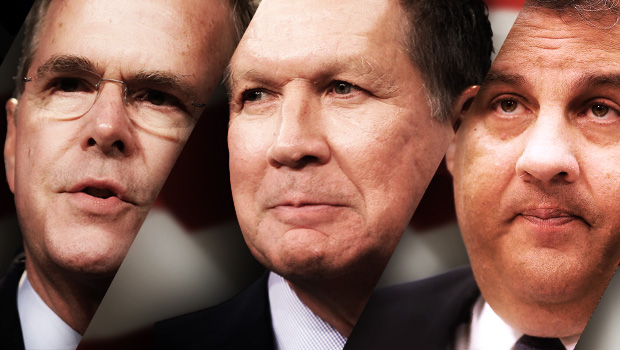 Ohio Gov. John Kasich hit a milestone on Friday: he held his 100th town hall in New Hampshire of his 2016 presidential campaign.

The three governors in the GOP presidential race have banked on winning New Hampshire, which holds the first-in-the-nation primary Tuesday, just eight days after they received low rankings in Iowa's caucuses.

Since the beginning of last year, Kasich has spent 69 days in the Granite State; New Jersey Gov. Chris Christie has spent 72 days on the ground; and former Florida Gov. Jeb Bush has been there for 54 days.

But their heavy presence in the key New England state has not translated into a rise to the top of the polls, and whether their intense ground operations will pay off remains a question. Donald Trump has only spent 24 days in New Hampshire since early 2015 and yet he has consistently led the Republican presidential pack.

Linda Fowler, a professor of government at Dartmouth College, says it was the celebrity factor that immediately made Trump soar. The three governors have not only tried to counteract Trump, but they also have tried to break away from each other.

"All three of them have a very similar message," Fowler told CBS News about Bush, Christie and Kasich. "They're experienced, they've gotten things done, they know how to work with a variety of people to produce results."

Another problem for the governors has been the crowded GOP ballot.

"If you look at where they stand in the polls, collectively, if that was one person, they'd either be tied or a little bit ahead of Trump," Fowler added.

Despite their low poll numbers, all three candidates have taken advantage of a state where retail politics matters to voters. Knowing that direct engagement with voters is key, Bush and Kasich have deployed the most robust ground operations.

In addition to Bush's active super PAC, Right to Rise, his campaign has an army of paid staffers who have been knocking on doors each day, making phone calls to voters and distributing literature.

"Bush has an actual operation; Bush has the best ground game of anybody," said Dave Carney, a New Hampshire-based GOP strategist unaffiliated with any of the campaigns. "The problem is he doesn't have the most support so the ground game is important to get you from 8 to 10 or 12 percent. It's not going to get you from 8 percent to first. It's not going to jump you 20 points..."

Kasich's super PAC, New Day for America, has also developed a strong grassroots operation. It operates six offices in New Hampshire, has 20 staffers based in the state and dispatched 100 volunteers on Thursday for the final get-out-the-vote push through Tuesday's primary.

"Our organization has been very active in New Hampshire since the end of July," Connie Wehrkamp, press secretary for New Day for America, told CBS News. "We've had a presence on TV since July and we've had staff and offices open since August. We would say that we have the strongest ground game here."

Last week, Christie said his campaign had knocked on 1,100 doors in New Hampshire over the course of a weekend and estimated that as many as half of voters still remained undecided only a week out from the primary.

"I haven't decided. It's between Kasich, Christie and Jeb," retired, GOP-leaning voter Sarah O'Reilly told CBS News last week at a Kasich event. "It's hard when you think of someone and they're like the lower tier and so, you don't think they can win. That's kind of frustrating when you see the polls. It's kind of discouraging."

Nearly a third of likely GOP primary voters are in the same boat -- they're still trying to decide whom to support, according to the latest University of Hampshire poll released Monday. It found 46 percent have definitely decided on a candidate and nearly a quarter said they are leaning toward someone.

Kasich is betting his candidacy on New Hampshire. He spent the day before the Iowa caucuses in New Hampshire and has remained there since. The New York Times, Boston Globe and seven out of eight newspapers in New Hampshire have endorsed him in the run-up to the primary. But he told reporters last week that if he doesn't do well in the primary, he could drop his White House bid.

Carney predicted a governor could impede Rubio's momentum, but it could be difficult for them to stick around in the race if they fall below third place.

"I do think if someone were to slow down Rubio that one of the governors could easily come in third," Carney said, "But I don't think a governor coming in fourth or fifth is going to give them a ticket of credibility unless it's really close."

The governors are still holding out hope for a surprise at the polls.

"There could be a late breaking event that tips this one way or the other and nobody's strategy can control for that," Fowler said.

A forecast for snow overnight into Tuesday could affect voter turnout. Fowler also described a "wildcard" situation because of the way the ballots will appear. Thirty Republicans will appear on the GOP ballot and the ordering is determined randomly and not alphabetically for each town, she said. That could be intimidating or confusing to inexperienced voters and could make it difficult for the governors to make their names stand out.

If the three governors' strategies don't benefit them, Fowler argued in a recent op-ed that New Hampshire may become less important in the future.

"People are going to look at New Hampshire and say, 'Oh, we don't need to spend all this time in New Hampshire. We can just have big rallies and be celebrities.'"