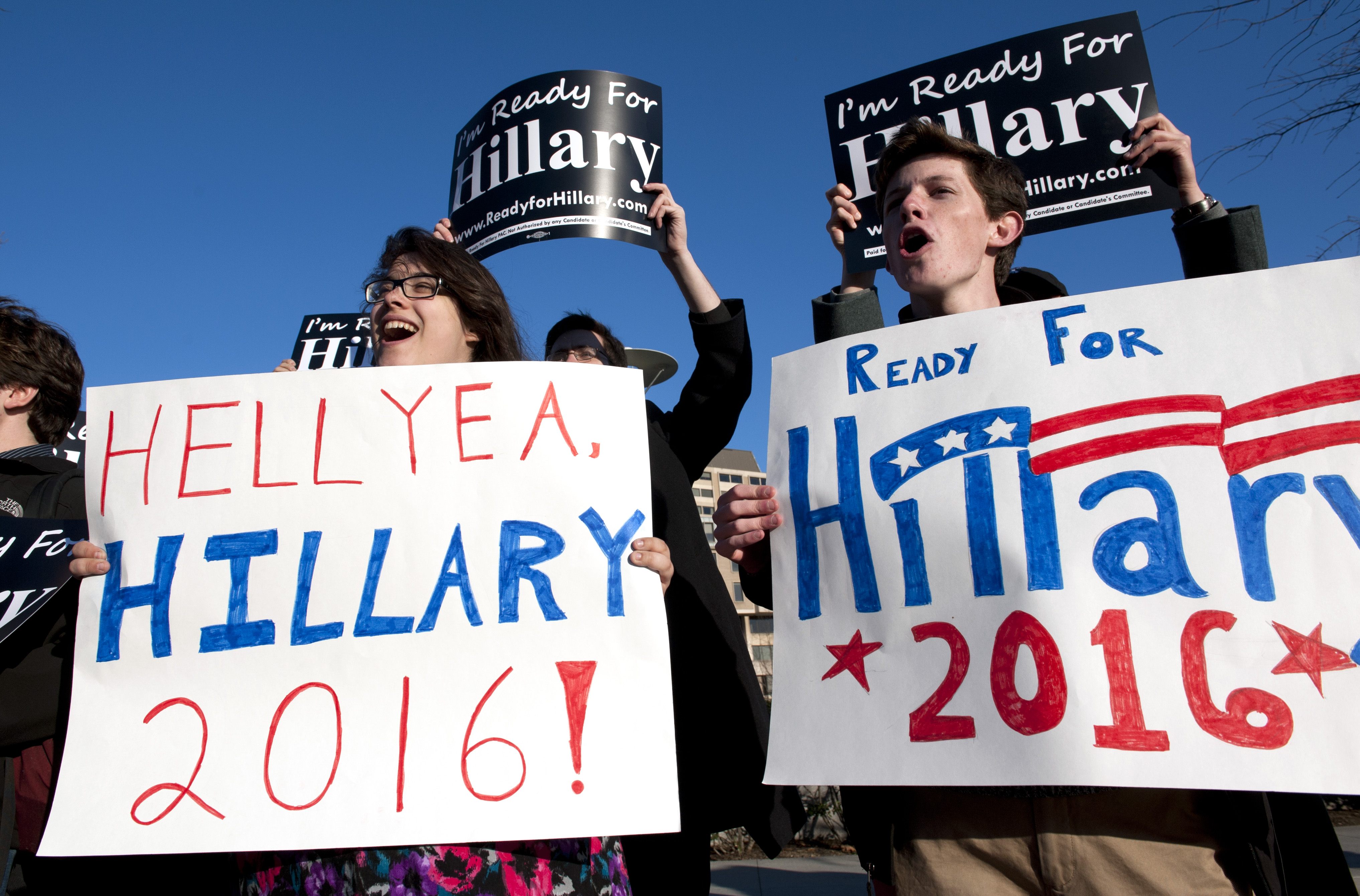 NEW YORK (AP) Young supporters hold signs outside Hillary Rodham Clinton's speeches urging her to run for president. Audiences listen with rapt attention as she discusses the plight of women and girls in developing countries.

Even a long-expected book deal announcement generates lots of chatter.

Not long since Clinton stepped down as President Barack Obama's secretary of state, the "will she or won't she" question already is following her around, like the activists who held dark blue "Ready for Hillary" signs outside speeches at the Kennedy Center in Washington and New York's Lincoln Center.

This past week, Clinton came off a two-month break with a soft roll-out of sorts.

She gave her first two public speeches since leaving the State Department, released details of a book scheduled for June 2014 and plans to join an advisory board of the U.S. Global Leadership Coalition.

The mere makings of a public schedule for the runner-up of the 2008 Democratic presidential race is enough to get political tongues wagging over what it all means for the 2016 campaign.

The speeches and news coverage offered an early indication of some of what awaits her as she considers whether to seek the White House again in three years: adoring supporters, young and old, former political advisers to her husband begging her to run, and potential rivals sizing her up.

Tina Brown, editor in chief of Newsweek and the Daily Beast, which sponsored the meeting where Clinton spoke Friday, captured the buzz when introducing her.

"Of course," Brown said, "the big question now about Hillary is, what's next?" That elicited loud cheers, but no answer from the woman beside her on the stage.

Clinton avoided presidential politics, devoting a half-hour speech at the annual Women in the World conference in New York to the status of women across the globe.

Pointing to the U.S., she said America's position as a world leader demands that it devote full attention to empowering women to participate in the economy and society fully. She called for equal pay for women, allowing women to take advantage of family and medical leave from their jobs and encouraging women and girls to pursue careers in math and science.

"This truly is the unfinished business of the 21st century, and it is the work we are called to do," Clinton said. "I look forward to being your partner in all the days and years ahead. Let's keep fighting for opportunity and dignity."

The 65-year-old former first lady has said she has no plans to pursue the White House again but has refrained from ruling anything out. That's the standard disclaimer of people who very often decide to make such plans later, or sometimes don't.

Many Democrats view her as a worthy successor to Obama, with whom she waged a fierce struggle for the party's nomination in 2008. Her popularity soared as secretary of state, although that may have been in part because she cast aside the sharp brand of politics that made her a polarizing figure at times in the past, in favor of diligent diplomacy.

Some Clinton loyalists have tried to lower the speculation, noting that the last presidential election was only six months ago.

But James Carville, a former adviser to President Bill Clinton, signed on with the Ready for Hillary political action committee on Thursday, urging supporters to help lay the groundwork for a Hillary Clinton campaign.

Carville said the "enthusiasm and hunger" for a Hillary Clinton presidency was "unlike anything I've ever seen."

"It isn't worth squat to have the fastest car at the racetrack if there ain't any gas in the tank - and that's why the work that Ready for Hillary PAC is doing is absolutely critical," Carville said. "We need to convert the hunger that's out there for Hillary's candidacy into a real grassroots organization."

Clinton is not expected to make a decision anytime soon. She has outlined plans to write a memoir about her time at the State Department, advocate on behalf of women and girls, and give speeches. With her book due out in the middle of 2014, she'll have an opportunity to travel the country in the months before the congressional elections.

Her biggest splash was her video announcement in support of gay marriage last month, a move that put her in line with most Democrats. Clinton had limited her comments on domestic policy as secretary of state and her departure has freed her to speak more openly about the issues.

Yet for the first time in 20 years, Clinton's schedule is open-ended.

Her first paid speech will be April 24 in suburban Dallas, a day before she joins her husband, Obama and political luminaries at the dedication of President George W. Bush's presidential library. A second paid speech is set for June 17 in Grand Rapids, Mich.

What remains clear is that until she makes a choice, her every word, appearance and association will be scrutinized - and that she'll get plenty of encouragement.

About 50 young supporters, including many George Washington University students, gathered outside Clinton's first post-State Department speech at the annual Vital Voices Global Leadership Awards on Tuesday at the Kennedy Center.

About a dozen Hillary backers gathered along Amsterdam Avenue for the New York speech. Aaron James Darr, a 22-year-old actor, held a homemade sign that showed Clinton's image in front of yellow and orange beams and proclaimed "Hillary 2016."

Democrats see Clinton in a uniquely powerful spot and are willing to wait - for now.

"It's the most enviable position to be in because all you have to do is breathe the air every day," said Hank Sheinkopf, a Democratic strategist who advised her husband's presidential campaign. "What political figure has that luxury?"