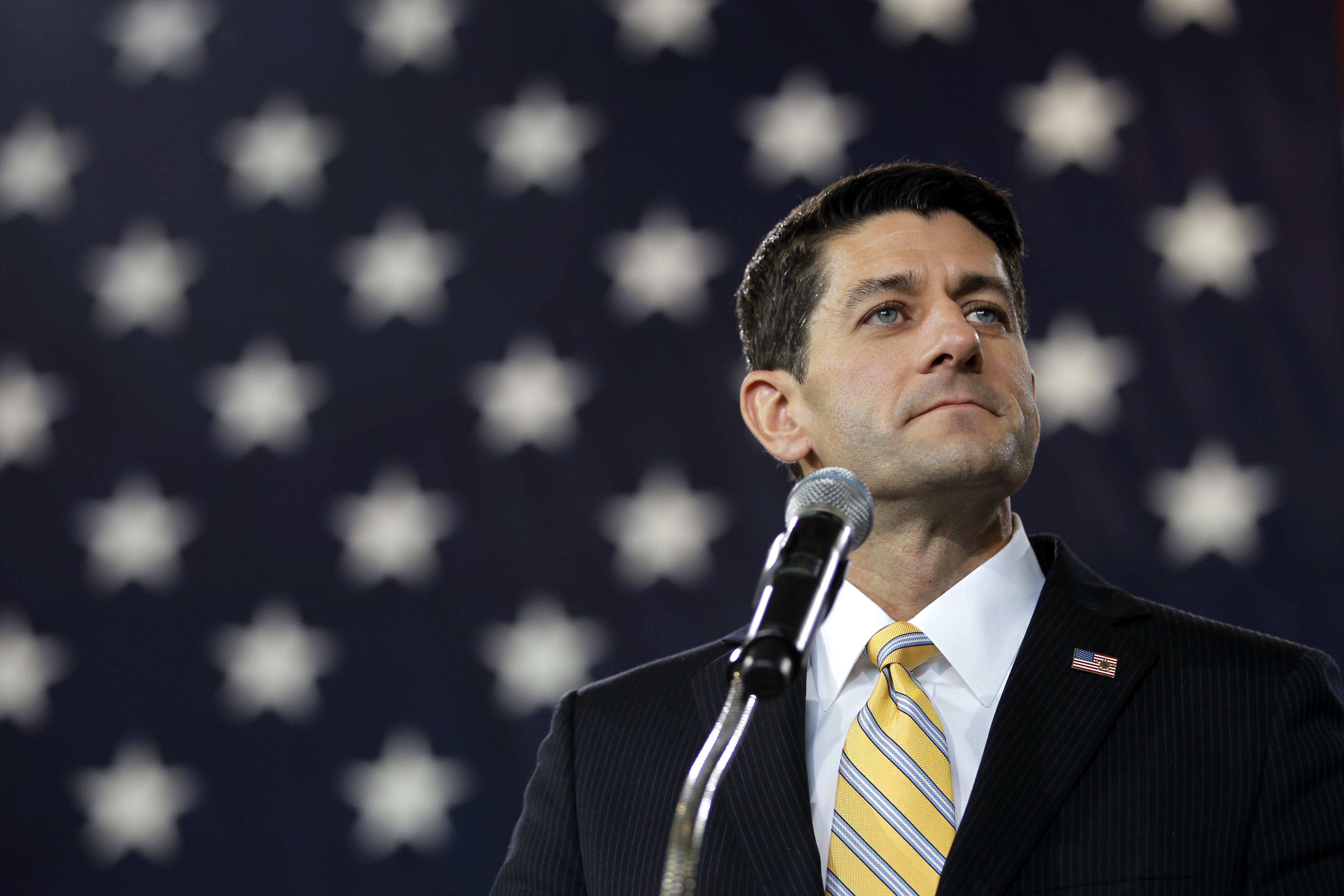 APPLETON, Wis. The election may be only a month away, but that doesn't mean Brenda Hansen wants to have a conversation about politics.

It's easy to understand why. Over the past two years, Wisconsin has emerged as perhaps the best illustration of just how polarized the American political landscape has become. That's due in large part to Republican Gov. Scott Walker's attempt to pass legislation curbing the bargaining power of public sector unions after his 2010 election, which set off a protracted battle that included angry protests in the capital and a failed recall attempt in June.

"I'm so sick of politics after the whole governor fiasco," said Hansen's friend Kelly Abel of Appleton. "This past year, two years, has just been politics. I'm sick of hearing everything."

She's going to have to endure it a little bit longer. Wisconsin has emerged as one of the key battleground states in the presidential election, thanks in part to Mitt Romney's decision to tap Wisconsin Rep. Paul Ryan as his running mate. A Quinnipiac University/CBS News/New York Times pollout Thursday showed the race to be effectively a tossup: President Obama leads Romney 50 percent to 47 percent in the battle for the state's 10 electoral votes. The Obama campaign is clearly spooked: Mr. Obama has visited the state twice over the past month, including a stop in the Democratic stronghold of Madison right after the first presidential debate. Vice President Joe Biden and first lady Michelle Obama have also made campaign trips to the state over the past two months. And the Obama campaign started running ads in the state in September.

In light of Mr. Obama's 14-point Wisconsin victory four years ago, one might think that the Obama campaign shouldn't have needed to go to the trouble. But Wisconsin is a more divided state than the 2008 election suggests: Though a Republican hasn't won here since Ronald Reagan's landslide victory in 1984, Wisconsin came within a half point of going to George W. Bush in both 2000 and 2004. The Badger State may be home to liberal bastions like Madison and liberal politicians like former Sen. Russ Feingold and Senate candidate Tammy Baldwin, but it's also the land of Walker, Ryan, Republican National Committee chair Reince Priebus and the GOP stronghold of Waukesha County, which supported McCain over Mr. Obama by a 26 point margin.

And while Democrats are seen as having an organizational advantage in most of the battleground states, Wisconsin is an exception thanks to the expensive Walker recall fight. Last month, Obama campaign manager Jim Messina acknowledged that Republicans "test drove their car [in Wisconsin] whereas in other states they haven't."

"It would make sense they're strong here, as are we," he said. "They are stronger than McCain was in '08, no question, on the ground."

A victory in Wisconsin would give Romney some very important breathing room in getting to the 270 electoral votes necessary to win the presidency. Even after the boost he got following the first presidential debate, Romney has a relatively narrow path to 270. Winning Wisconsin would mean he could afford to lose states like Iowa and New Hampshire; it would also give him a plausible path to victory that does not include Ohio's 18 electoral votes. If Romney loses Wisconsin and Ohio, he would have to complete a near-sweep of the other seven battleground states to secure a victory.

Wisconsin Republicans say that Romney's decision to tap Ryan, who faced off at the vice presidential debate against Joe Biden on Thursday night, has energized their side. "What Paul Ryan being on the ticket does is add to our voter enthusiasm," says a Romney campaign official in Wisconsin. "And enthusiasm is what wins races."

That enthusiasm could be seen at the Rochester Deli in Waukesha, where Dan Trawicki, who works in law enforcement, said he was backing what he referred to as the "Romney-Ryan ticket."

"I think Paul Ryan is one of the first elected officials to speak openly and honestly about some of the entitlements that are there, that we're in trouble," he said.

It's not clear that Ryan's roots will sway many Wisconsin voters, however. The landscape has changed since John F. Kennedy tapped Texan Lyndon Johnson as his running mate in 1960 in order to win Texas and other Southern states, says University of Wisconsin-Madison professor Kenneth Mayer.

"There isn't a whole lot of evidence that a vice presidential nomination can make a non-competitive race competitive today," he said. "But at the same time - a vice presidential nominee from a state can add a couple of percentage points." And with the candidates now separated by just three percentage points, that could be enough to swing the race.

Democrats are quick to point out that Ryan simply wasn't all that well known statewide before he was tapped by Romney - one July survey found that more than a third of Wisconsinites said they did not have enough information about him to say whether they had a favorable impression. "At this point, you'd be hard-pressed to make the argument that he's helping Romney anywhere but his own congressional district," said an Obama campaign official in Wisconsin. "He only represented one part of the state, he passed on a statewide run."

Carol Smith, a conservative Romney supporter who lives in Waukesha County, said that while she was "thrilled" that Ryan was picked, she doesn't think the choice is going to have a significant impact on most voters in the state.

Republicans say a shift to the right in Wisconsin can be seen in Walker's recall triumph, when the first-term governor beat back ferocious union opposition to remain in office with 53 percent of the vote.

Democrats counter by pointing to exit pollsthat found that voters in the recall still favored Mr. Obama over his challenger. "There was intrinsic opposition to the recall mechanism," said the Obama campaign official in Wisconsin. "People may not have loved Scott Walker, but they hated the idea of a recall election."

Patrick McIlhone, a freelance copywriter in Madison, is among those who backed Walker in the recall but plans to vote for the president.

"I think there's a lot of people who voted for Walker because he was the legitimate governor," he said. "And as far as we know, he didn't do anything illegal. And people are kind of sick of, 'oh I don't like you, I'm going to recall you.' I personally don't agree with anything Walker did, but I voted for him because of that. He legitimately earned that office."

Memories of the nasty recall fight are still fresh in Madison, where protesters camped out in the state capitol building to protest Walker's anti-union bill. Near the steps in front of the capitol building, a fist has been drawn in chalk next to the words, "this ain't even close to being over." Inside the mostly empty building, a man is yelling at a capitol police officer because he said one of his sisters was almost killed in the protests.

"It's not law enforcement, it's just attempted intimidation," he told a reporter. "I say attempted because we're not going to be intimidated." When the man turned away, the capitol police officer, who had displayed little emotion as the man railed against him, rolled his eyes.

On the main street between the capitol and the University of Wisconsin-Madison campus, law student Scott Thompson is taping a pro-Obama sign to a lamppost; a few steps away, a student in a t-shirt with the word "HOPE" and a picture of the president walks by. Nora Patterson, a graduate student who calls herself a liberal and enthusiastic Obama supporter, said that "a lot of the energy on campus is very apathetic, but there's still enthusiasm for Obama."

It's not as much as it might have been four years ago," she said. "I think we definitely would have liked him to intervene more when the union busting was going on, because he didn't come and visit or anything, and he didn't come during the recall, but Wisconsin's very politically active and I still see that."

There are signs that Wisconsin still may tilt blue. Though he campaigned to the right in the Republican primary, GOP Senate candidate (and former governor) Tommy Thompson has taken to calling himself a "moderate conservative" in the general election. And despite his name recognition, the new Quinnipiac University/CBS News/New York Times poll showed Thompson is embroiled in a tight Senate race with Rep. Tammy Baldwin, one of the most liberal members of the House.

But it is the state's Republicans who seem to be more excited to vote. The new poll found that 57 percent of likely Republican Wisconsin voters say they are more enthusiastic about voting this year than in the past. That figure is just 36 percent among the state's Democrats.

How Wisconsin will be won

Democrats say they will do better in November than they did in the recall election in part because the electorate will be bigger - though it's worth noting that the difference in votes cast in the recall (about 2.5 million) and the 2008 election (a little less than 3 million) is not enormous.

"For a Democrat to win statewide, they have to absolutely slay in Madison and Milwaukee and hope they cannot lose too badly in the rest of the state," said Mayer of the University of Wisconsin-Madison. While Democrats look to boost turnout in the urban areas, Republicans do the same in the Milwaukee suburbs (including Waukesha) and rural areas, which were hit particularly hard in the recession.

The unemployment rate in the state is 7.5 percent - lower than the national average but much higher than Wisconsinites are used to - with unemployment particularly pronounced in the rural, largely conservative north. Mr. Obama leads Romney among Wisconsin women, union households, voters age 18-34 and those with college degrees in the new poll; Romney leads among men and holds a slight advantage among voters over 65 years old and white voters.

The swing region is around Appleton and Green Bay, which Appleton resident Val Seitz says is flush with "hardheaded Germans" like herself who do not change their minds easily. Seitz says she isn't supporting either candidate: The president, she charges incorrectly, is a Muslim who was sworn into office on the Koran and refuses to say the pledge of allegiance; Romney, she says, has no understanding of the problems people like her face on a daily basis.

She still plans to vote, however, a reflection of the state's relatively high level of political engagement. "I'll write in my dog's name if I have to," she said. "She's a stray, and she's probably more loyal, more honest, more true than any politician."

Democrats campaigning in the region have stressed Mr. Obama's support for manufacturing and the auto bailout, which benefited Wisconsin factories and parts suppliers. They have also sought to counter the notion that Mr. Obama does not relate to Midwestern values - in part by deploying Biden, who will campaign in the state Friday. (Ryan serves much the same function for Romney.)

Smith, the conservative from Waukesha County, says she has a "different values system" than the president.

"I had a very traditional upbringing, believe in a hard work ethic, that's how you make your way up," she said. "And I don't know that the whole American system is necessarily as ingrained in the president as it is in the people that I know and especially the Midwest."

On the main street in Appleton, an unemployed independent voter from Green Bay named Sharon, who did not want to give her last name, said she was going to back the president, in part because of his "courageous" push for health care reform. Mostly, though, she just wants to get to November 7th.

"It seems like a bloodsport now, politics," she said. "It's just I don't - I hate it. I just want it to be over and done with."