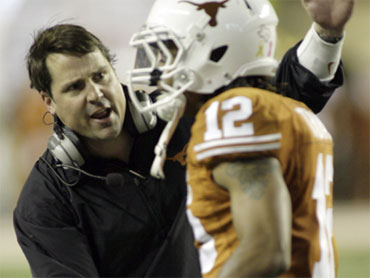 Will Muschamp spent 10 years in Gainesville as a kid, graduated from Georgia and coached at Auburn and LSU.

He knows the Southeastern Conference.

For the Gators, that outweighed his lack of head-coaching experience.

Florida hired the former Texas defensive coordinator on Saturday night, handing him one of the premier jobs in college football and giving him the tough tasks of following Urban Meyer and rebuilding the Gators after a disappointing 7-5 season.

"This is a dream come true," Muschamp said in a statement. "I grew up watching the Gators and whatever other SEC team was on television. I have great memories watching SEC football with my father on Saturdays and playing football in the back yard with my two brothers right here in Gainesville."

Ray Rice's wife tells her side of the story

The story behind the seventh-inning stretch song

Muschamp will be introduced at a news conference Tuesday evening.

Florida athletic director Jeremy Foley said he targeted Muschamp shortly after Meyer resigned Wednesday and he was the only person to whom Foley offered the job.

Foley said Muschamp's familiarity with the SEC was an important factor.

The timing of the announcement raised some eyebrows. Did the Gators plan the announcement to coincide with the Heisman Trophy ceremony? Former Florida quarterback Cam Newton, now Auburn's offensive star, won the award a little more than two years after he left Gainesville in the midst of cheating allegations and following his arrest on a theft charge.

The hire also was met with a mixture of excitement and trepidation. Some raved about Muschamp's background and his fiery demeanor. Others questioned whether a longtime assistant coach would be the right fit for one of the nation's elite programs.

Meyer, however, applauded the hire.

"Coach Muschamp is a great hire for the University of Florida," Meyer said in a statement. "He is a relentless recruiter and brings a tremendous amount of energy and passion to the game. I would run into him on the road often on the recruiting trail and have always been impressed with him as a coach and a person."

Meyer walked away from the job Wednesday, four days after he called Foley and said he was contemplating the move, and left about $20 million guaranteed on the table.

This season the Gators were near the bottom the SEC in every offensive category, got blown out by Alabama, South Carolina and Florida State, and finished 7-5. It was the most losses in Meyer's 10-year coaching career.

Several freshmen transferred, others threatened to leave and there seemed to be a huge divide between the team's underachieving seniors and Meyer's highly touted newcomers. Players refused to point fingers, but there were outcries for personnel and assistant coaching changes. There also was another arrest, the 30th involving 27 players during Meyer's tenure.

Muschamp will try to turn things around.

He was already one of the hottest names among assistant coaches when he was hired at Texas before the 2008 season.

Internet video clips of his expletive-filled tirades on the sidelines at Auburn excited Longhorns fans. He had alternate nicknames of "Coach Boom!" for his noted enthusiasm and "Coach Blood" because he once ignored blood pouring down his face after a cut in the first game of the 2008 season.

Muschamp was only 11 games into his stint at Texas when the university surprisingly announced a deal to nearly double his salary to $900,000 and make him the head-coach-in-waiting behind Brown.

Brown was behind the move but insisted he had no plans to retire, leaving some to wonder if Muschamp would have the patience to put in the years at Texas before taking over.

"More than anything, I want to thank Mack Brown," Muschamp said. "I'm so grateful for the opportunity he gave me and my family and all of the guidance. He is the best in the business, and I can't say enough about everything he did to help prepare me for this. He really wanted it to work out for me to be the future coach at Texas, but this was just an opportunity I couldn't pass up.

"It's close to my family and my wife's family, and like Texas, Florida is just a tremendous place in a great conference. I wouldn't have left for any other job."

Muschamp's defense was a key part of the Texas 25-2 run over the 2008-2009 seasons that saw the Longhorns rise to No. 1 for a month in 2008 and play for the BCS national championship last season.

The defense faltered badly in 2010, however, as Texas went 2-5 at home and suffered its first losing season in 13 years with dismal losses to UCLA, Iowa State and Kansas State.

"We were planning and hoping Will was going to be the next head coach at Texas, but obviously things didn't work out that way," Brown said. "We respect his decision, and we are really happy for Will and (his wife) Carol. He is a great coach and will be a good fit for Florida."

"Our commitment remains that we will build the best coaching staff in the country and we will begin a nationwide search immediately," Brown said.