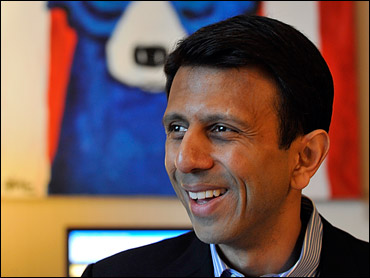 A month after Louisiana Gov. Bobby Jindal complained about wasteful spending in President Obama's economic stimulus package - including money he sneered was for "something called 'volcano monitoring'" - Alaska pilots were grateful for such expenditures.

Readings from seismometers and atmospheric pressure sensors alerted scientists that an eruption had occurred. Weather radar confirmed the presence of an ash cloud that ascended more than 11 miles above sea level.

"Without instruments in the ground, we would not have been able to tell you this was coming," said John Power, a geophysicist with the U.S. Geological Survey at the Alaska Volcano Observatory.

Volcano monitoring became a political issue when Jindal gave the Republican response to President Obama's message to Congress on the economic stimulus package. Jindal said the package was "larded with wasteful spending," including $140 million for volcano monitoring.

U.S. Sen. Mark Begich, D-Anchorage wrote Jindal and said volcano monitoring is a matter of life and death in his state. He made the point again after the latest eruptions.

"I sleep better knowing the scientists are at work at the AVO keeping track of this activity," he said by e-mail.

The Alaska Volcano Observatory is a joint program between the USGS, the University of Alaska and the state Division of Geological and Geophysical Surveys. The observatory was formed in response to the 1986 eruption of Mount Augustine.

The observatory has a variety of tools to predict eruptions. As magma moves beneath a volcano before an eruption, it generates earthquakes, swells the surface of a mountain and sends out gases. The observatory samples gases, measures earthquake activity and watches for landscape deformities.

"Generally the earthquakes that are occurring at these volcanoes are too small to be felt unless you're standing right on the volcano," Power said.

Mount Redoubt, about 100 miles southwest of Alaska's largest city, first blew at night Sunday, and even after sunrise, was socked in by clouds, obscuring ash that that can clog a jet engine and knock aircraft from the sky.

Scientists with the volcano observatory last fall noted an increase in seismic activity at Redoubt and in January warned that an eruption was imminent. The warning level has been lowered and raised since then as the mountain cooled and heated up.

The explosions Sunday and Monday damaged three seismometers, including the one closest to the summit. They could have been hit by flying rock or their electronic circuitry could have been damaged by lighting that often accompanies an ash plume. Seven others seismometers continue to take readings on the mountain.

If Redoubt follows historic trends, there will be more eruptions in the next 48 hours, or in weeks to come.

During the 1989-1990 eruptions, ash clouds were generated on and off for about a week. Redoubt then alternated between growing a lava dome and sending up ash clouds for about five months, Power said.

"I would be surprised if we don't see more," Power said.