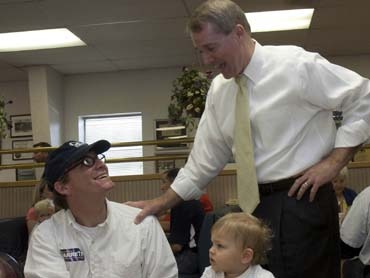 After forcing a runoff election in the Republican gubernatorial primary in South Carolina, Rep. Gresham Barrett said that he is "absolutely" sticking around for the runoff despite a 27-point loss to front-runner Nikki Haley.

"The most insignificant score is the score at halftime," Barrett said in a speech to his supporters last night. "Now, we've got two weeks...We're going to finish strong, and we're going to make history."

But with mounting Republican pressure for him to drop out of the race, that might be easier said than done.

Barrett qualified for the runoff because Haley, who is quickly becoming a star in Republican circles, finished just short of the 50 percent threshold needed to secure the nomination.

But because Haley was so close to winning outright, some Republicans are treating Haley like the nominee - and dismissing Barrett as essentially irrelevant. The rhetoric translates to pressure on Barrett to drop out of the race.

In a statement congratulating Haley, the Republican Governors Association suggested she is a lock for the nomination.

"The voters of South Carolina made a clear choice in Nikki Haley, notwithstanding the possibility of a runoff. The outcome is all but certain," said RGA Executive Director Nick Ayers. "Moreover, receiving half of the votes against two other statewide incumbent Republicans and a sitting congressman speaks volumes of her strength as a candidate and bodes very well for her in the general election."

And the Weekly Standard's Bill Kristol told Fox News Tuesday that based on his conversation with Republican insiders, he expects that Barrett will drop out.

But if the real goal here is an unchallenged nomination for Haley, Republicans will have to do more than just convince Barrett to drop out of the race.

According to the South Carolina Election Commission, the state's runoff election procedure mandates that if Barrett does drop out of race, Haley would still have to take part in a runoff election against the next highest vote getter -- Attorney General Henry McMaster. She would be exempted from a second election only if all her opponents, including fourth place finisher Lt. Gov. Andre Bauer, drop out.

The runoff election is scheduled for June 22nd. The winner will go on to face Democratic nominee State Senator Vincent Sheheen.