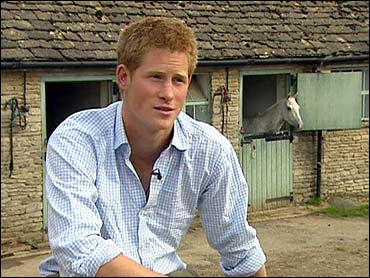 This story was written by CBS News correspondent Richard Roth

For his 21st birthday, Britain's Prince Harry received a £2.5 million inheritance — about $4.5 million — from his late great-grandmother, the Queen Mother. His grandmother, Queen Elizabeth, had a coin minted in his honor, and delegated powers for him to act on her behalf as a Counsellor of State. His father, Prince Charles, reportedly gave him a polo pony and, if accounts in the British press can be trusted, he received an expensive new wristwatch from his 19-year-old girlfriend, Chelsy Davy.

In return, the "spare heir," third in line to the British throne, bestowed a gift of his own upon his family and the monarchy that's priceless: a bit of good publicity.

In a gaffe-free encounter with the British press, Harry painted a self-portrait of a young royal determined to shoulder his responsibilities without surrendering his soul; and he depicted a family almost blissfully tranquil and harmonious — even if just for the moment. His is, after all, not just any family — it's the Windsor family, whose travails played out in the public arena can easily rival prime-time TV for romance, melodrama or comedy.

Just last January he'd shown up at a costume party wearing a Nazi uniform complete with a swastika. A photo of the uniformed young prince, splashed on Britain's front pages, became a royal embarrassment and sparked a national outrage. He'd already developed a reputation for falling out of nightclubs and fighting with photographers, and the "party prince," who'd been caught smoking dope and too often acted like one, was alternately vilified or pitied by the country's columnists and editorial writers.

There must have been some suspense-filled breath-holding by Palace spin-doctors when Harry was escorted to three interviews with British radio, television and newspapers on the eve of his birthday. Encounters of this sort are carefully stage-managed, but in the end the actor's on his own, without a script or director. Yet Prince ("just call me Harry") Harry seems to have done just fine.

He apologised for the Nazi uniform ("a very stupid thing to do and I've learned my lesson"), but explained he'd like to be seen as both a "party prince" and a "caring prince." "I am both of them," he said. "If that's a problem with anyone, then I'm very sorry. What does everyone expect me, to be just the caring person and not to have a cigarette, not to have a beer?"

To be sure, there was some confusion in some of what he said. Does he really hope to spend 35 or 40 years in the military and also dedicate his professional life to caring for orphans in Africa?

And there may have been some naïve bravura in his claim that he'd not be slogging through military training at Sandhurst if he didn't see himself dodging bullets on a front line someday. ("I would not drag my sorry ass through Sandhurst … if they had said I could not be in the front line.")

But his words were refreshingly colloquial; so much so that some e-mails to the BBC were even praising him as a "bloke."

And it's hard to imagine how he could have done a better job on behalf of his father and Camilla, the Duchess of Cornwall, who are expected to make their first official overseas tour to the United States this autumn.

Asked about their marriage, and her new official role in the Windsor family, Harry said Camilla is a "wonderful woman and she's made our father very, very happy … William and I love her to bits." And with what seemed a keen sense that pens were poised to exploit any ambiguity in his words he added, "She's not the wicked step-mother. I'll say that right now."

The Daily Express summed up Harry's performance by saying he's done "what no amount of professional public relations work has achieved." He's turned Camilla "into a sympathetic figure."