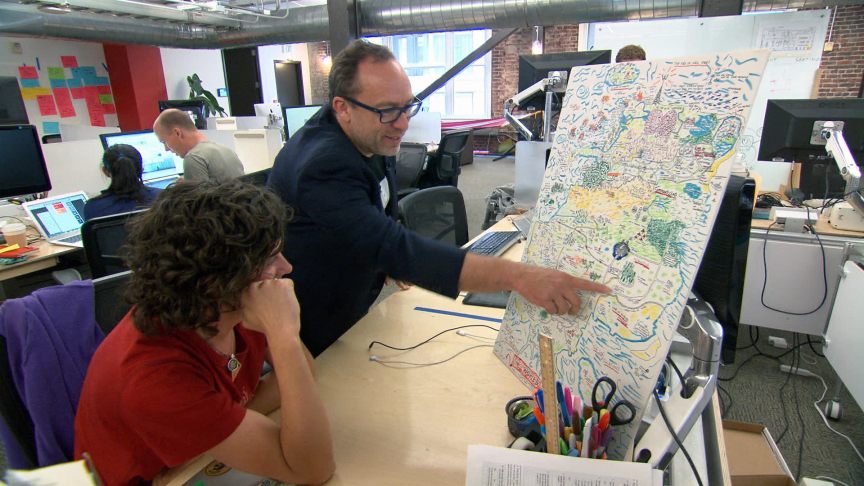 The following is a script from "Wikimania" which aired on April 5, 2015. Morley Safer is the correspondent. David Browning and Jonathan Schienberg, producers.

Over 200 times a second, half a billion times a month, somebody clicks on Wikipedia. It's the greatest argument-settler wrought by man, or at least the fastest, perfectly suited to our era of instant gratification.

When it debuted 14 years ago, the online encyclopedia was a novelty, its accuracy hit or miss. Now it's one of the world's busiest websites, its reliability vastly improved, but not quite perfect. What's more, it's a charity, a non-profit where a devoted army of unpaid authors collaborate: articles about everything you can imagine. Who are they? And how does it all work? Ask Mr. Wikipedia himself, Jimmy Wales.

Morley Safer: What on earth is wiki?

Jimmy Wales: Wiki. The word is from wikiwiki, which is a Hawaiian word. If you go to Maui, at the airport you take the Wikiwiki bus. And the word wikiwiki means quick. So the idea of wiki-software is quick collaboration. It's a tool to allow people to come together and quickly edit things.

And once a year -- a band of hardcore contributors to Wikipedia come together from the four corners of the earth for what you might call the dance of the geeks. Meeting, this time, in London. The entertainment is, shall we say, eclectic. And so is the crowd.

They call it Wikimania. Two thousand showed up for the event. Some are buttoned-down. Some are rock and roll. The articles they write and edit cover everything from aardvarks to ZZ Top. And they're all true believers in Wikipedia's power.

[Wikimania attendee: It's a fantastic attempt to really be the hitchhiker's guide to the galaxy of the real world.]

Wikipedians take to these pages in a never-ending, worldwide cyber-conversation: to write articles, add or subtract from the work of others, post comments and argue about what's worthy of notice and what needs fixing. There are 12,000 new pages created every day. A grand total of 35 million articles in 288 different languages.

Sue Gardner: The end result of that is really rich, really complex, and mostly reliable and credible.

Sue Gardner spent seven years as Jimmy Wales' lieutenant, running the website day-to-day, and sizing up the people who do the writing.

Sue Gardner: It's about 100,000 people around the world, every political persuasion, every religion, no religion. You know, from seven years old to 75 years old. The one characteristic all Wikipedians have in common is that they are all incredibly smart. They are really, really smart.

Sue Gardner: Yeah, and persnickety, right? They're fussy people. They are a little OCD. They're careful and they're cautious and they're serious. And it matters to them that things are right. They're persnickety people.

And how does it work? We enlisted the help of Amanda Levendowski, a recent law school graduate who's worked on dozens of articles.

Amanda Levendowski: I do the editing because I love it, particularly with regard to articles about the law.

Morley Safer: Well, what is the reward?

Amanda Levendowski: You have the satisfaction of feeling like you've participated in some thing, but for Wikipedia in particular there's another whole benefit because you have the opportunity to help other people find information about stuff you're into.

[Amanda Levendowski: Now one of the other neat things you can do...]

Anybody can do it.

You hit the edit button and you type. But your information has to have a legitimate source and some degree of notability. No love letters to yourself.

[Amanda Levendowski: So we've taken out that comma.]

Three times a second, 12,000 times an hour, someone, somewhere makes an edit, small or large. And the articles keep piling up.

Morley Safer: There is no limit in a certain way, correct?

Amanda Levendowski: I think the growth could be infinite, yes.

There are Wikipedians in residence at places like the National Archives, a gold mine of historical detail. At the Frick Museum in New York, these Wikipedians get their kicks studying antique clocks.

Jimmy Wales: You know roughly what is it? What is it about?

It's truly an international movement. There were Egyptian Wikipedians at this year's gathering. A delegation of school kids from Kazakhstan, in Central Asia, where the website has over 200,000 articles in the Kazakh language.

Jimmy Wales: You're the real bright spot in your region. You know, all your neighboring countries are maybe not so good.

And in South Africa, this man is Mr. Wikipedia. Dumi Ndubane.

Back home in Johannesburg, when he's not at his real job as an electrical engineer, Ndubane and his colleagues work overtime to get South Africa into the Wikipedia world. They contribute entries about notable landmarks: this Catholic school, originally a convent.

Dumi Ndubane: Do we have the history of the school? Yes. So that becomes a section.

He's written about the house in Johannesburg where Mahatma Gandhi once lived.

Dumi Ndubane: The idea of tolerance and passive resistance was born here, in this house.

He's written about the Soweto uprising by high school students in 1976: the spark for the eventual downfall of apartheid. And he encourages today's students to translate Wikipedia articles into their native languages.

[Dumi Ndubane: What language are you?

Dumi Ndubane: And we need all those, all those languages, on Wikipedia. We need them.]

The website's headquarters are in San Francisco. There's a staff of about 200, working in typically laid-back techie style.

Of prime importance: developing rules and computer code to eliminate as many errors as possible. Executive director Lila Tretikov.

Lila Tretikov: We've had numerous studies that showed that as a body of knowledge, it's more accurate than other encyclopedias in existence in the past. So it's not, it's never 100 percent, but it's very high quality.

There are computer programs that scour the site for vandalism and vulgarities, striking them out -- almost instantly. Wikipedians worldwide also act as fact checkers, looking for personal attacks and manipulation by PR people. But Wales admits, you can't catch them all.

Jimmy Wales: Our biggest problem with bias, and things that are wrong that stay for a long time are actually on very obscure topics. You know, a topic that not many people are interested in and not many people are looking at. And so if something's wrong, it can persist for quite some time.

And because it's a nonprofit, unlike virtually every other major website, there's one thing you won't find at Wikipedia central: Internet zillionaires.

Morley Safer: You created one of the most successful websites in the world and yet you chose to make it the least profitable.

Jimmy Wales: Yeah. It just felt right that we should be a charity, free knowledge for everyone. So that's always been our philosophy.

The money to pay the staff and keep the site up and running comes from donations, large and mostly small. Last year, people from around the world gave $51 million, in ­­­­70 different currencies.

Sue Gardner: I think they give to Wikipedia out of affection. I think it's that simple.

Which means: the main preoccupation at other websites - advertising - isn't even on the radar.

Jimmy Wales: If we were ad supported, we would always be thinking about, well, gee, look at all these people reading about Elizabethan poetry. There's nothing to sell them. Let's try to get them to read about hotels in Las Vegas, or something like this. And we don't. We just don't care.

In a sense, it was probably in the stars that Jimmy Wales - the kid from Huntsville, Alabama -- would become the Internet's most famous knowledge broker.

His mother taught school, and the World Book Encyclopedia in the living room was a constant presence. He was a first generation geek - 10 years old when personal computers hit the market in the mid-seventies. His first Internet site was Bomis, a place where guys could compare notes on guy things: cars, sports and babes. Bomis failed, but it got Wales thinking about the possibilities of mass collaboration on the Internet, which led, eventually, to Wikipedia.

The gender imbalance was at the heart of a significant internal dispute at Wikipedia.

Jimmy Wales: When William and Kate got married, the royal wedding, someone created an entry about Kate Middleton's dress. And somebody nominated it for deletion, and some of the arguments were, you know, effectively, "This is stupid. It's just a dress. How can you have an encyclopedia entry about a dress?"

Wales intervened, pointing out that there are thousands of articles about computers and software programs.

Jimmy Wales: And we don't think anything about that, 'cause we're a bunch of computer geeks." So we decided to keep it. But there was an interesting moment in that debate, where people were saying "Oh, I don't know about this, therefore it's not important." And that is bias and that is something we have to be careful about.

When he's not on the road, Wales lives mainly in London. His wife Kate worked for former British Prime Minister Tony Blair. And Wales himself is already an elder statesman in the Internet world:

[Bill Clinton: We're talking about the limits of the social....]

But though he passed up billions by making Wikipedia a nonprofit, he clearly doesn't suffer from that Silicon Valley condition known as Zuckerberg envy.

Morley Safer: Do you ever wonder or get wistful about "Gosh, if I only had a billion, think of all the good things I could do."

Jimmy Wales: No, not really. I mean, how many bankers are there in the world who earn fabulous salaries, but whose lives are incredibly boring compared to mine? I mean, I have a fantastic, amazing life where, you know, my work feels meaningful to me in a way that almost nothing else could. So yeah, it's great. Don't worry about me.

A final burning question Wikipedians have debated over the years: what day is Jimmy Wales' birthday?

Jimmy Wales: I have this really funny situation where the reliable source (see him) of my birth certificate, is wrong.

It says August 8th. But his mother says that's an error. He was born August 7th.

Jimmy Wales: I trust my mother. She was there.

So his Wikipedia entry says the 7th. But just to be safe, his persnickety followers sang happy birthday -- twice.