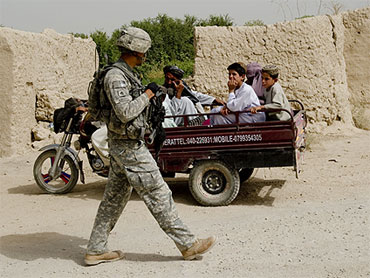 Shocking in scope if not in content, the leak of 91,000 classified U.S. records on the Afghanistan war by the whistle-blower website Wikileaks.org is one of the largest unauthorized disclosures in military history.

The documents cover much of what the public already knows about the troubled nine-year conflict: U.S. spec-ops forces have targeted militants without trial, Afghans have been killed by accident, and U.S. officials have been infuriated by alleged Pakistani intelligence cooperation with the very insurgent groups bent on killing Americans.

WikiLeaks posted the documents Sunday. The New York Times, London's Guardian newspaper and the German weekly Der Spiegel were given early access to the records.

The release was instantly condemned by U.S. and Pakistani officials as both potentially harmful and irrelevant.

White House national security adviser Gen. Jim Jones said the release "put the lives of Americans and our partners at risk." In a statement, he then took pains to point out that the documents describe a period from January 2004 to December 2009, mostly during the administration of President George W. Bush. And, Jones added, before President Obama announced a new strategy.

Pakistan's Ambassador Husain Haqqani agreed, saying the documents "do not reflect the current on-ground realities," in which his country and Washington are "jointly endeavoring to defeat al Qaeda and its Taliban allies."

The U.S. and Pakistan assigned teams of analysts to read the records online to assess whether sources or locations were at risk.

The New York Times said the documents reveal that only a short time ago, there was far less harmony in U.S. and Pakistani exchanges.

The Times says the "raw intelligence assessments" by lower level military officers suggest that Pakistan "allows representatives of its spy service to meet directly with the Taliban in secret strategy sessions to organize networks of militant groups that fight against American soldiers in Afghanistan, and even hatch plots to assassinate Afghan leaders."

The Guardian, however, interpreted the documents differently, saying they "fail to provide a convincing smoking gun" for complicity between the Pakistan intelligence services and the Taliban.

The most revealing point in the leaked documents, according to The Guardian's correspondent in Afghanistan, are inter-military communications which cite the use of heat-seeking missiles to down coalition aircraft. Taliban militants have been rumored to possess such weapons, but their use has never been confirmed by the U.S. military or NATO.

CBS News chief foreign affairs correspondent Lara Logan first reported in October 2009 that U.S. intelligence officials believed Iran was supplying surface-to-air missiles to the Taliban - the very same weapons the U.S. supplied to the Afghan resistance to bring down the Russians during that country's failed invasion.

The leaked records include detailed descriptions of raids carried out by a secretive U.S. special operations unit called Task Force 373 against what U.S. officials considered high-value insurgent and terrorist targets. Some of the raids resulted in unintended killings of Afghan civilians, according to the documentation.

During the targeting and killing of Libyan fighter Abu Laith al-Libi, described in the documents as a senior al Qaeda military commander, the death tally was reported as six enemy fighters and seven noncombatants - all children.

Task Force 373 selected its targets from 2,000 senior Taliban and al Qaeda figures posted on a "kill or capture" list, known as JPEL, the Joint Prioritized Effects List, the Guardian said.

CBS News correspondent Mandy Clark reports that many of the revelations in the leaked documents come as little surprise, but serve to clarify what is often a murky picture of the war on the ground.

Clark reports that while anger among the Afghan population was already high over the use of drone strikes and the civilian casualties that can occur with them, the details revealed by Wikilieaks will likley stoke that anger and leave many with doubts that the problems are being efficiently addressed.

WikiLeaks said the release Sunday "did not generally include top-secret organizations," and that it had "delayed the release of some 15,000 reports" as part of what it called "a harm minimization process demanded by our source," but said it would release the documents later, possibly with material redacted.

In an interview with The Guardian, Wikileaks founder Julian Assange defended the illegal release of the documents, saying they "show the true nature" of the war in which America and its allies have become even more deeply involved in recent years.

Assange said the military's argument that releasing the information could put troops on the ground in greater danger by revealing their movements and tactics was invalid in this case, as the information discussed in the leaked documents "expires quickly".

U.S. government agencies have been bracing for a deluge of thousands more classified documents since the leak of helicopter cockpit video of a 2007 firefight in Baghdad. That was blamed on a U.S. Army intelligence analyst, Spc. Bradley Manning, 22, of Potomac, Md. He was charged with releasing classified information earlier this month. Manning had bragged on line that he downloaded 260,000 classified U.S. cables and transmitted them to Wikileaks.org.