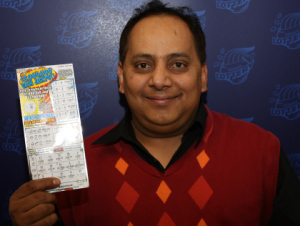 CHICAGO - The wife and daughter of a Chicago man who was poisoned with cyanide after winning the Illinois lottery have settled his estate with an agreement that prevents either woman from filing a wrongful death lawsuit unless new evidence surfaces in a criminal investigation of his death.

The settlement approved Wednesday in Cook County probate court gives one-third of Urooj Khan's lottery winnings to his widow, Shabana Ansari. She will also get the home where she lived with her late husband, their dry cleaning business and commercial property.

Khan's daughter from a previous marriage, Jasmeen Khan, will receive the remaining lottery winnings and his five condominiums, according to CBS Chicago.

His death was initially ruled to be from natural causes, but suspicions raised by his brother prompted authorities to test fluids taken from his body before he was buried. Those tests showed he had been poisoned.

His body was exhumed in January so further evidence could be obtained and an autopsy conducted, but the coroner's office said it turned up no significant new clues about his death.

Khan's death is now considered a homicide, but authorities have been tightlipped about the status of any investigation or whether they have any suspects.

Al-Haroon Husain, the attorney for Khan's widow, said Wednesday that Ansari had not heard from police in months. She and other relatives have denied any involvement in Khan's death and have expressed a desire to learn the truth.

Khan bought a lottery ticket in June 2012, despite having foresworn gambling. After winning he said he planned to use it to pay off mortgages and donate to St. Jude's Children's Research Hospital.

The night before he died, Khan had dinner with his wife, daughter and father-in-law at their home. He awoke feeling ill sometime that night and died at a hospital the next morning.

Khan died without a will, leading to the court battle.