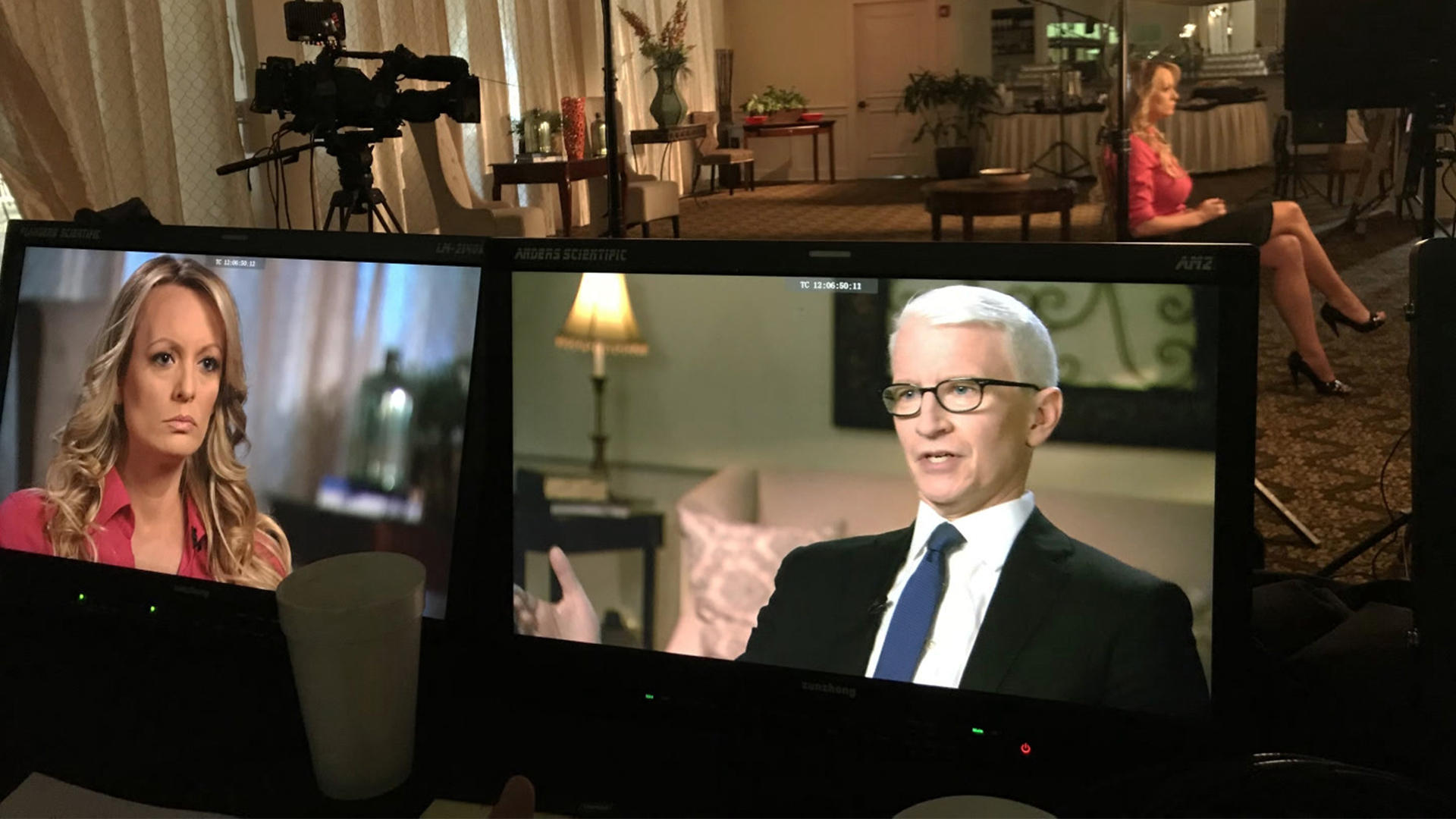 Tonight, 60 Minutes aired a much-anticipated interview with adult film actress Stephanie Clifford, better known by her stage name Stormy Daniels. She says she had an affair with Donald Trump in 2006 and was paid to keep quiet about it—a week and a half before the 2016 election.

On the broadcast, correspondent Anderson Cooper tells Daniels he isn't 100% sure why she's doing the 60 Minutes interview.

"I think there's more to come on this story." - Anderson Cooper

Cooper answers that question, discusses Daniels' credibility, and explains why the story matters in a conversation with 60 Minutes Overtime's Ann Silvio in the video above.

"I think there's plenty of people who would understand why we would be interested in doing this story," Cooper says. "I mean one, it's a human story about somebody who says they had an intimate relationship with the president of the United States."

But the biggest headline in the 60 Minutes story isn't the alleged affair with Mr. Trump, Cooper says. It was the subsequent actions taken to silence Daniels, including a threat she described on 60 Minutes. Daniels says a man approached her in a Las Vegas parking lot in May 2011 and said, "Leave Trump alone. Forget the story." According to Daniels, the man looked toward her infant daughter and said, "A beautiful little girl. It'd be a shame if something happened to her mom."

"That's a moment that people have not heard before," says Cooper. And it's one that's likely to prompt further reporting.

"I think there's more to come on this story. I'm not saying necessarily on Stormy Daniels' aspect of the story, but on the methods that were used to keep her silent," Cooper tells Overtime. "If Stormy Daniels' story is true that a thug came up to her in a parking lot in Las Vegas in 2011—this is long before Donald Trump was a presidential candidate—I mean, if somebody is using intimidation tactics, physical intimidation tactics, it's probably not the first time they've done it. So that's a potential story I would imagine people would look at: Has this kind of thing happened before? And I don't know the answer to that."

Watch the full Overtime discussion with Anderson Cooper—which includes additional portions of his interview with Stormy Daniels—in the video player above. To hear Cooper and 60 Minutes producers Andy Court and Evie Salomon explain how they got the story, click here.

The transcript of Cooper's conversation with 60 Minutes Overtime's Ann Silvio is as follows:

ANDERSON COOPER: I mean aren't you taking a big risk?

STORMY DANIELS: I am.

ANDERSON COOPER: I guess I'm not 100% sure on why you're doing this.

SILVIO: Could viewers say the same thing to you—they're not 100% sure why you and 60 Minutes are doing this Stormy Daniels interview?

ANDERSON COOPER: Yeah. I'm sure some people will say that. I think given the level of interest in it, I think there's plenty of people who would understand why we would be interested in doing this story. I mean, one, it's a human story about somebody who says they had an intimate relationship with the president of the United States.

ANDERSON COOPER: And you had sex with him.

ANDERSON COOPER: You were 27, he was 60. Were you physically attracted to him?

ANDERSON COOPER: Not at all.

COOPER: For us, it wasn't so much "there was an affair." That's not as much the headline. For us, it's everything that has happened since and how we've gotten to this point.

SILVIO: And there were many tawdry details that you and the 60 Minutes team decided to leave out of this story.

COOPER: Yeah. Of course. I mean, yes. There are many, many tawdry details which we did not include in the story because it's just, you know, that's not our interest.

SILVIO: What's the biggest news that's going to come out of your interview with Stormy Daniels, as you see it?

STORMY DANIELS: I was in a parking lot, going to a fitness class with my infant daughter. And a guy walked up on me and said to me, "Leave Trump alone. Forget the story." And then he leaned around and looked at my daughter and said, "A beautiful little girl. It'd be a shame if something happened to her mom." And then he was gone.

COOPER: She's saying she can clearly identify the person. She did not go to the police. And again, people may say that hurts her credibility. She says she was scared.

ANDERSON COOPER: You took it as a direct threat?

STORMY DANIELS: Absolutely. I was rattled.

SILVIO: So that helps explain why she's been denying the affair and signing these documents?

COOPER: It certainly could help explain. And you know, Michael Cohen, Trump's attorney, has categorically denied ever making a threat against her in any way, physical, by email, by phone, in any way. But I think that's a moment that people have not heard before.

ANDERSON COOPER: How do we know you're telling the truth?

STORMY DANIELS:  'Cause I have no reason to lie. You know, I'm not getting paid to be here. I'm opening myself up for, you know, possible danger and definitely a whole lot of sh*t.

SILVIO: She's very concerned, it seems in the interview, that she's going to be labeled a liar and a gold digger.

SILVIO: And she gives you lots of examples where she could've made money, she could've sold the story--and didn't.

ANDERSON COOPER: A movie of you having sex with somebody who looked like Donald Trump?

STORMY DANIELS: Right. And I said no repeatedly, much to their, you know--

STORMY DANIELS: Because it's not how I wanted to be portrayed. I did not want this out there. Even though I could have capitalized on it and made money the entire time, I never did.

SILVIO: Do you think this interview will help her credibility?

STORMY DANIELS: I had nothing to do with it.

STORMY DANIELS: I-- yes. But I haven't used that slogan. The clubs are putting it on their flyers, I haven't uttered it at all until just now, because I think it sounds really cheesy.

COOPER: You know, look, in 2011 she was willing to accept $15,000 to tell this story. She [says she] didn't receive money, the article never saw the light of day. And then, you know, after the Republican nomination, she says people were coming to her with offers to sell her story.

STORMY DANIELS: Suddenly people are reaching out to me again, offering me money. Large amounts of money. Was I tempted? Yes.

COOPER: She says she struggled with it. So there have been times when she has, you know, tried to accept money, thought about accepting money, and ultimately did accept money to not tell her story.

ANDERSON COOPER: Just plain and simple, the $130,000, was it hush money to stay silent?

STORMY DANIELS: Yes. The story was coming out again. I was concerned for my family and their safety.

COOPER: Whether you believe her or not, that's up for viewers to decide. She certainly had a lot of details in her story.

SILVIO: She had a lot of details that, you might say, one could only know if they had been in an intimate situation.

COOPER: It would certainly appear that way, yes.

ANDERSON COOPER: Physically, you've seen him in ways that other people haven't?

STORMY DANIELS: Correct. And if need be, I can describe that.

STORMY DANIELS: I could. If need be.

SILVIO: For Trump voters who like the change that he represents, why does the Stormy Daniels story matter to someone like that who maybe already accepted, you know, Donald Trump is who he is?

COOPER: Right. It may not matter. It's not for me to say what should or shouldn't matter to a voter. But if lies have been told about somebody this seemed like certainly from Stormy Daniels' perspective an opportunity to set the record straight in a credible forum and tell her side of the story.

ANDERSON COOPER: Why does the record need to be set straight?

STORMY DANIELS: Because people are just saying whatever they wanted to say about me.

COOPER: But there are certainly other questions that are raised by the response to the allegations that Stormy Daniels is making. You know, federal election laws, which may or may not have been violated. There's potential interest from the Department of Justice. There's the Mueller investigation, which, you know, if they're interested in Michael Cohen and they're interested in getting material on Michael Cohen that they can then use to pressure him to reveal more information, which is obviously a technique prosecutors use, they may be interested in any violations of election laws that Michael Cohen may or may not have perpetrated.

SILVIO: What has it been like to be the reporter at the center of the story and the anticipation around it?

COOPER: Yeah, it's been interesting. I mean, you know, I've done a lot of big interviews, but just the sheer cross-section of people who seem interested to watch this story has been really interesting to me. I mean, people stopping me on the street, in Ubers and, you know, friends. It's been hard to remain silent about it. I'm just glad that it's finally out there and people can make of it what they will.

ANDERSON COOPER: Do you have any regrets about the sexual encounter with Donald Trump?

STORMY DANIELS: If I would have known 12 years ago that I'd be sitting here talking to you, no offense, then yes, I regret it.

STORMY DANIELS: Because I don't like talking to you about this.

SILVIO: What do we look for next? What should we watch closely after this story airs?

COOPER: I think you're going to see-- I think there's more to come on this story. I'm not saying necessarily on Stormy Daniels' aspect of the story, but on the methods that were used to keep her silent.

SILVIO: How those methods may have been used in other scenarios.

COOPER: Correct. If Stormy Daniels' story is true that a thug came up to her in a parking lot in Las Vegas in 2011—this is long before Donald Trump was a presidential candidate—I mean, if somebody is using intimidation tactics, physical intimidation tactics, it's probably not the first time they've done it. So that's a potential story I would imagine people would look at of how this kind of thing happened before? And I don't know the answer to that.

SILVIO: But there's more reporting to be done?

COOPER: I'm quite sure there is.

The video above was produced by Ann Silvio and Lisa Orlando, and edited by Lisa Orlando. Assistant editor is Sarah Shafer Prediger and coordinating producer is Rebecca Chertok Gonsalves.