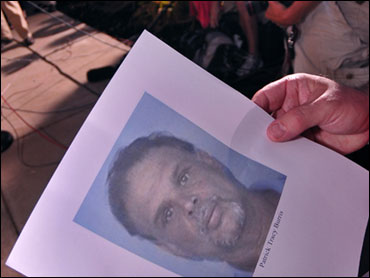 (AP Photo/Spartanburg Herald Journal)
Members of the press and public look over a handout photo of the suspected serial killer in South Carolina Monday evening, 7-6-09.

COLUMBIA, S.C. (AP) Patrick Burris, the South Carolina serial killer who terrorized a small community, had been arrested over thirty times, had convictions in four states and had beaten the rap on violent crimes in which he later intimidated the victims into silence.

That sorry history has left many, including law enforcement, to scratch their heads and ask why on Earth was this man recently given parole after an eight year stretch in a North Carolina prison.

"Look at this," said Carolina Law Enforcement Division Chief Reggie Lloyd, waving a stapled copy of Burris' criminal record. "This is like 25 pages. At some point the criminal justice system is going to need to explain why this
suspect was out on the street."

Burris, the man police say was behind five murders in six days, was well-known to authorities as a bully, so intimidating that a scared elderly man once refused to testify against him and extortion charges were thrown out.

The career criminal had repeated run-ins with police for stealing and writing bad checks, and authorities said Tuesday they weren't surprised his crimes escalated. They said Burris, paroled in April after serving eight years in a North Carolina prison, should have never been released.

Burris, 41, shot five people to death in a 10-mile area of rural Gaffney during a deadly rampage last week, police say. He had been on a drug and alcohol fueled bender from shortly after he murdered his last victim last Thursday to the moment he met his maker in a barrage of police-fired bullets on Monday, according to police.

Officers were investigating a burglary complaint at a home in Gastonia, N.C., 30 miles from where the killing spree started when they got into a violent confrontation with Burris and shot him to death.

Ballistics from a gun found with Burris have linked him to the South Carolina slayings.

"He always had a violent streak," Rockingham County Sheriff Sam Page said. "He was very intimidating and very threatening from his appearance: He was at least 6-5 and 250 pounds. You didn't want to mess with him."

It's unclear why Burris began his killing spree. Police were still piecing together details of his life. Records show he had lived in Rockingham County, N.C., a rural county near the Virginia border, since the late 1980s, but he also spent a lot of time behind bars. 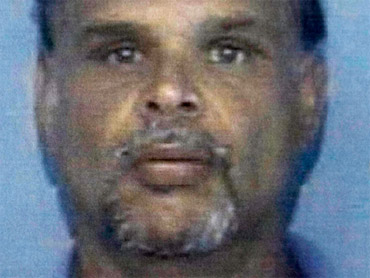 He was arrested more than 30 times in North Carolina alone; the first time in 1989 for blackmail. He also had convictions in Florida, Virginia, West Virginia and Maryland.

Most of his convictions in North Carolina involved stealing from homes and businesses and bad checks, records show.

But those cases don't reveal his true character, Page said.

In 1996, Page, then a detective at the Eden Police Department in north-central North Carolina, arrested Burris for extortion. He was accused of forcing an elderly man to write a check and cash it at the bank. But the charges were dropped when the man refused to testify.

"He intimidated that man. He was scared. There was no way he was going to testify," Page said.

In another case, Burris was charged with robbery and assault in 2000 in Eden, but those charges were dropped when the man "backed out and refused to show up for court," Eden Police Chief Reece Pyrtle Jr. said.

"You didn't want to cross him," Pyrtle said. "He had that scowl."

North Carolina Corrections Department officials were actually looking for Burris when he was shot because he had violated his parole. Page said authorities did everything they could.

"Every officer along the way did his job," he said. "But we have 37,000 prisoners committed to prison in North Carolina and when those prisons get full, our jails start backing up. I run a jail. I know they can't put everyone in jail. They have alternative programs to incarceration. But there are some that just need to be in jail; and this is one who just needed to be in jail."

The Gaffney killings began when peach farmer Kline Cash, 63, was killed June 27. Four days later, 83-year-old Hazel Linder and her daughter, 50-year-old Gena Linder Parker, were found bound and shot in the older woman's home. The next day, Stephen Tyler and his 15-year-old daughter Abby were found shot in their family's furniture store. 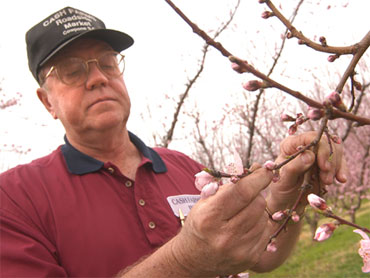 The investigation isn't over. Gaffney police chief Richard Turner said they were tracing the suspect's activities and try to figure out if he has killed others.

"We are all asking why? Why here? Why these individuals? Why these victims?" Turner said. "That's something that this guy took with him to his grave."

A former FBI profiler said it would be tough question to answer.

"This guy has got victims ranging from 15 to 83, he's got males, he's got females," said Mark Safarik, who retired in 2007 as a senior profiler in the FBI's famed Behavioral Analysis Unit. "I don't think that he had the motivation of a serial killer. ... How he got access to them and what the engagement was with these victims would go a long way to tell you what this dynamic is."

Burris' death relieved many area residents who have been armed and on edge. Business owners finally unlocked their doors Tuesday, but many still kept their weapons close.

"I still have my pistol under the counter, and I'll keep it right here," said Matthew McDonald, owner of Bookshelf Florist, as he lifted his small .38 handgun into view.