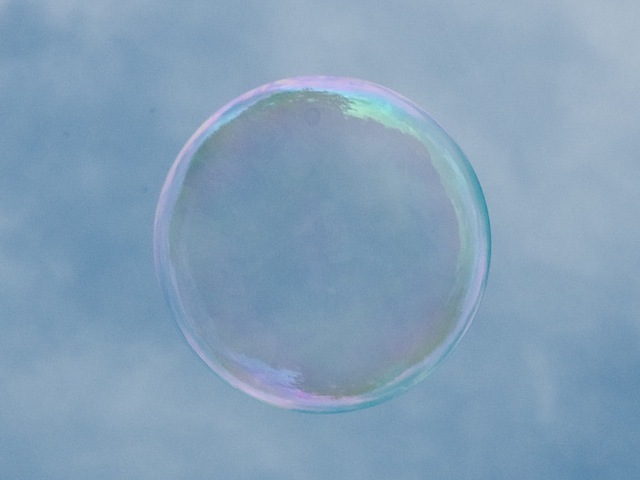 (MoneyWatch) COMMENTARY We all live and work in bubbles. It's sort of an amorphous term, but no matter what type of bubble you're referring to, conventional wisdom tends to paint them in a negative way.

For example, financial bubbles become overinflated and burst, like the recent housing bubble or the dot-com boom of the late 90s.

Leaders and executives often fall victim to a sort of shortsighted myopia caused by lack of perspective. They work in their own little worlds, breathing their own fumes and making bad decisions based on subjectivity or limited data.

And growing up in a tiny apartment in Brooklyn, N.Y., I often felt like a rat trapped in a cage with my family. The familial bubble can certainly become a petri dish of dysfunction, that's for sure.

Yes, there was a time when I thought that nothing good could come of living or working in a bubble. Well, guess what? I was wrong.

If nothing else, working in a bubble means focus -- focus on a project, a market, technology, functional expertise, whatever. Innovation and creativity often flourish in a bubble. It's well known that, for entrepreneurs to succeed, they need a razor-like focus on doing one thing and doing it better than anyone.

A recent article called "It's Always Sunny in Silicon Valley" suggests that, while most of the nation -- indeed much of the world -- lives in a state of turbulence and decline, "Silicon Valley exists in an alternative reality -- a bubble of prosperity" owing to the current boom of innovative companies like Apple, Google and Facebook.

One of the great business books of all time, "Organizing Genius: The Secrets of Creative Collaboration," by Warren Bennis, describes how groups of people that accomplish amazing things typically work in bubble-like environments where they're unusually focused on the task at hand to the exclusion of all else.

While Bennis does reference Steve Jobs and Apple in his book, others have more recently cited the way in which Apple "coddles its most valuable, productive employees," the creative folks, as "one of the company's most formidable assets."

Where do big ideas come from?
10 ways to think different: Inside Apple's cult-like culture
7 signs of a great team

And while people generally refer to the downside of working in our nation's capital or being "Inside the Beltway," there's certainly something to be said for existing in the negative space outside that political bubble -- of being in a sort of anti-bubble that's immune to today's political partisanship and turmoil.

While I'm by no means politically agnostic, I've often marveled at how people who lean both left and right, fiscally or socially, can work in complete harmony, day in and day out, for years and years, by simply avoiding polarizing and controversial topics like politics. They simply don't go "there."

Just yesterday, I had lunch with an old friend who doesn't share my political views. The first thing he did was bait me by asking what I thought of the Supreme Court ruling on President Obama's health care bill. But you know what? I didn't bite. You see, I had some personal things going on that were so important to me that politics -- even something as critical as healthcare -- just didn't register.

In that sense, the human mind has a unique ability to compartmentalize or wall off emotions, either entirely or just with respect to certain critical matters. Indeed, there can be a negative aspect to that if taken to extreme -- we call it sociopathic behavior -- but under certain circumstances, compartmentalization of thought or emotion can be remarkably beneficial.

So what's the key to living or working successfully in a bubble, to reaping its rewards without falling victim to its dark side? You might think the answer is to be aware of it, but unfortunately, that awareness would, by definition, burst the bubble and therefore eliminate its positive effect.

It's a perplexing dilemma to which I don't have the answer. If you want to take a stab at it, by all means, go for it. You wouldn't want to leave us all in a bubble of ignorance, blissful as that may seem.