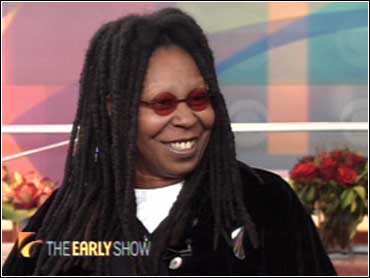 Whoopi Goldberg's next big project might not be starring in a movie or hosting the Oscars. It might be serving (at least for a day) as a co-anchor of The Early Show.

As she sat down for an interview Wednesday with Anchor Bryant Gumbel, she told Co-Anchor Jane Clayson, "The next time you're on vacation, I'm coming in."

But Goldberg persisted, vowing to fill in for Clayson and adding, about Gumbel, "I just made him nervous."

"I don't get nervous," countered Gumbel

So, with Goldberg's promise on tape, Gumbel asked her about her work on the new Hollywood Squares, where she stars in the center square and also serves as an executive producer.

"I call people. People don't call me back. They're scared," said Goldberg. "A lot of people can't do that show. It's not an easy show to do. You have to be yourself. Actors have a hard time.... It's not easy for actors to be themselves."

She told Gumbel that it is satisfying work for her because "it's one of the few times that I actually get to be witty. I get to actually be witty and have fun. It's different when someone has written you the lines."

The new Hollywood Squares premiered in 1998. The original Hollywood Squares, with Paul Lynde as the center square, ran from 1966 to 1982. Another version ran again in a brief unsuccessful run in the late '80s.

Is she a better center square than Paul Lynde was?

For her, performing on Hollywood Squares is more fun than making movies.

She may be taking smaller roles in smaller films, but don't tell her she's curtailing her movie career.

"I'm cracking ice for young women on the screen. What are you talking about?" she told Gumbel. "It's called cracking ice. In actor years, I'm 44. That's about 105,000. That's the thing. You have to build longevity."

She's a partner in flooz.com, which offers gift certificates for online shopping, and offers creative input for its commercials.

The new Hollywood Squares is taped in Los Angeles, where Goldberg has a house and a lot of family. But she lives in New York and she does not fly. So she travels across the U.S. in a motor bus, which takes two days. (A voracious reader, Goldberg spends the time with a two drivers and a bunch of books.)

Outside of Hollywood Squares, you can catch Goldberg in movie theaters starring in Girl, Interrupted with Winona Ryder and Angelina Jolie.