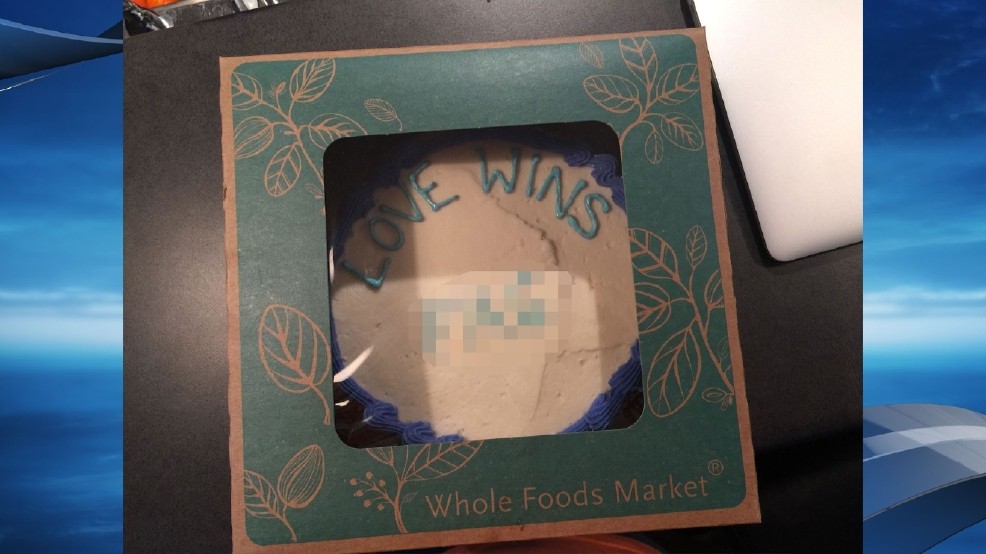 AUSTIN, Texas -- A Texas pastor who claimed a cake he bought from Whole Foods in Austin had a homophobic slur written on it is now facing legal action of his own from the supermarket giant.

The attorneys for Pastor Jordan Brown said he ordered a cake from a Whole Foods store with the personalized message "Love Wins," but when he received it, the cake said "Love Wins F**."

But Whole Foods is disputing his claim.

They say his accusations are fraudulent, and they intend to take legal action against Brown and his attorney.

"Our bakery team member wrote 'Love Wins' at the top of the cake, which was visible to Mr. Brown through the clear portion of the packaging," Whole Foods said in a statement. "That's exactly how the cake was packaged and sold at the store. Whole Foods Market has a strict policy that prohibits team members from accepting or designing bakery orders that include language or images that are offensive."

Whole Foods also released the security footage of Brown checking out of the store, they say further backing their position.

"Mr. Brown admits that he was in sole possession and control of the cake until he posted his video, which showed the UPC label on the bottom and side of the box," the statement read. "After reviewing our security footage of Mr. Brown, it's clear that the UPC label was in fact on top of the cake box, not on the side of the package."

Whole Foods added that they stand behind their bakery team member, who is a member of the LGBTQ community.

"And we appreciate the team members and shoppers who recognize that this claim is completely false and directly contradicts Whole Foods Market's inclusive culture, which celebrates diversity," the statement said.

The press release from the company also included the following photo.

However, previously in a YouTube video, Pastor Brown had claimed the cake contained a homophobic slur.

He said didn't realize what it said until he got into his vehicle. In the video, he shows the box containing the cake, apparently still sealed, with the message written on it.

Brown said he called and spoke to an employee at Whole Food after receiving the cake and the employee was extremely apologetic. He said the employee then requested the issue be taken care of internally, and would call him back.

Brown said in the video that when the employee, who appeared to be a store manager, called back two hours later, he said the Whole Foods employee did not do this, and said there was nothing that could be done.

Brown's attorneys told CBS affiliate KEYE, that after reaching out to the Whole Foods corporate office and receiving no substantive response for more than three days, they filed a lawsuit.

Brown's attorney previously released a statement in regards to the alleged incident, in which he said his client continues to be overwhelmed by the feelings of pain, anguish and humiliation because of this incident.

"He frequently shopped at Whole Foods, which makes this all the more shocking and disappointing," said Austin Kaplan, Brown's attorney. "What really concerns him is knowing that unless some action is taken, this kind of thing could happen again, and that someone else might have to go through a similarly excruciating experience."

According to his attorney, Pastor Brown is an openly gay African-American man, and founder of the Church of Open Doors, a non-denominational, Christian-based church.