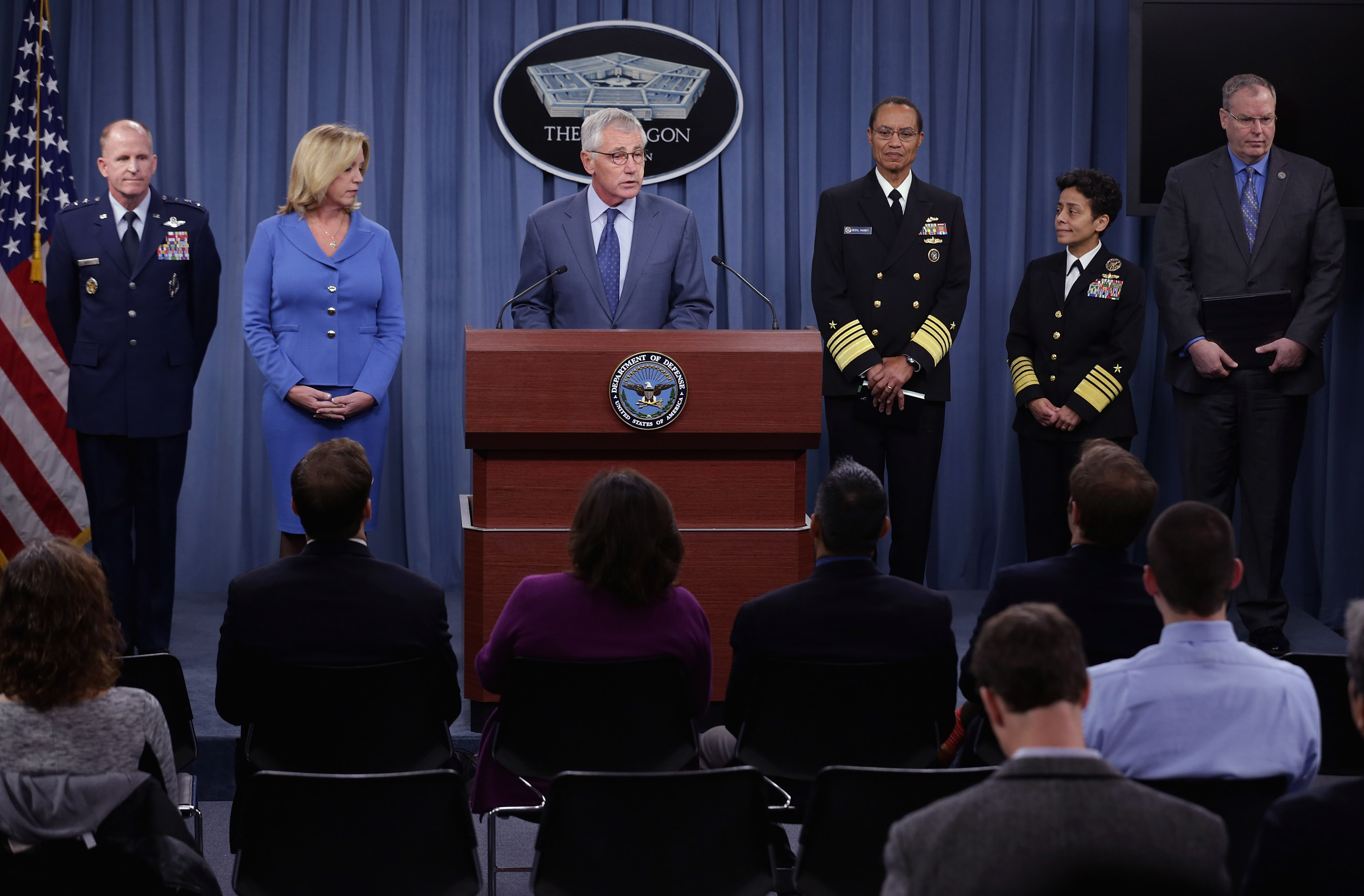 With Defense Secretary Chuck Hagel headed for the exit, who will take his place?

When Hagel's departure was announced on Monday, speculation about his replacement largely fell on a trio of names that churned through the rumor mill last time the Pentagon had a vacancy at the top: Sen. Jack Reed, D-Rhode Island, former Undersecretary of Defense for Policy Michele Flournoy, and former Deputy Secretary of Defense Ashton Carter.

Reed and Flournoy, though, quickly took themselves out of consideration, with Flournoy citing family concerns, and Reed citing his work in the Senate.

Now, a new short list seems to be taking shape, including Carter and a few others. Here's a brief look at the people considered most likely to take the helm at the Pentagon when Hagel leaves.

Carter was the Deputy Secretary of Defense between 2011 and 2013, serving as the Pentagon's chief operating officer under both Hagel and his predecessor, Leon Panetta. Before that, he'd served in a variety of roles within the Pentagon under President Obama and former president Clinton, along with lengthy stints in academia and the private sector.

As the number two at the Pentagon, Carter helped oversee the department's budget during an period of belt-tightening, and he boasts a deep familiarity with the department and its massive bureaucracy that could be a selling point for his nomination. He stepped down in 2013 after Mr. Obama passed over him to nominate Hagel when Panetta retired, but maybe the president will make it up to him.

Johnson, currently the head of the Department of Homeland Security (DHS), has emerged as a top candidate to replace Hagel. Before taking the reins at DHS, Johnson was the Pentagon's top lawyer between 2009 and 2012, and he played a key role in policymaking on a number of fractious issues, including the long-sought closure of the detention facility at Guantanamo and the repeal of the "don't ask, don't tell" policy barring gay people from serving openly in the military.

Johnson is well liked within the administration, and he earned plaudits for his spearheading of the president's recently announced executive action on immigration. But that action still has a massive implementation effort ahead of it, and its political radioactivity could also make for a divisive confirmation process, particularly with Republicans poised to assume control of the Senate in January. And to further complicate matters, if Johnson makes the leap across the Cabinet from DHS to the Pentagon, the vacancy he'd leave behind would create an extra nomination headache for the president.

Currently the deputy secretary of defense, Bob Work has inherited much of Carter's portfolio overseeing budget cuts as the Pentagon struggles the absorb the effect of sequestration. A 27-year military veteran, retired Marine, and former undersecretary of the Navy, Work undoubtedly has the resume to suit the position, though he hasn't had a very high public profile.

Work is also currently the chairman of the Nuclear Deterrent Enterprise Review Group, which was tasked with examining the Pentagon's maintenance of the U.S. nuclear arsenal after several recent scandals undermined confidence in one of the department's most critical missions.

Several other names have been floated as possible nominees, from current and former administration officials to lawmakers with a hand in defense policy. Navy Secretary Ray Mabus, a former governor of Mississippi and U.S. Ambassador to Saudi Arabia, has been mentioned as a possible replacement. Mabus obviously has the confidence of the president -- he was considered for the job in 2011, when Panetta ultimately took over. However, a recent complaint about the cost of his travel as Navy Secretary ($4.7 million since he assumed the post) could be a strike against him, though an inspector general has cleared him of any wrongdoing.

Air Force Secretary Deborah James has also been mentioned as a possible replacement for Hagel. Before she took command of the U.S. Air Force and its $110 billion budget in 2013, James was a senior executive with a number of defense contractors. She also served in the Clinton administration as an assistant secretary of defense and, before that, as a staff member on the House Armed Services Committee. If nominated and confirmed, James would make history as the first female secretary of defense.

A pair of lawmakers have also earned a fair share of speculation. One, Sen. Carl Levin, D-Michigan, is currently the chairman of the Senate Armed Services Committee. In his more than 30 years in the Senate, and he's been a strong advocate for the Pentagon on Capitol Hill. His relationships with colleagues, some dating back decades, could help ensure a painless confirmation process if he's nominated.

And the top Democrat on the House Armed Services Committee, Rep. Adam Smith, D-Washington, is another possible choice. Representing a district near Seattle since 1997, Smith has been an active voice in defense policy for almost two decades, carving a fairly hawkish profile for himself within the Democratic caucus.