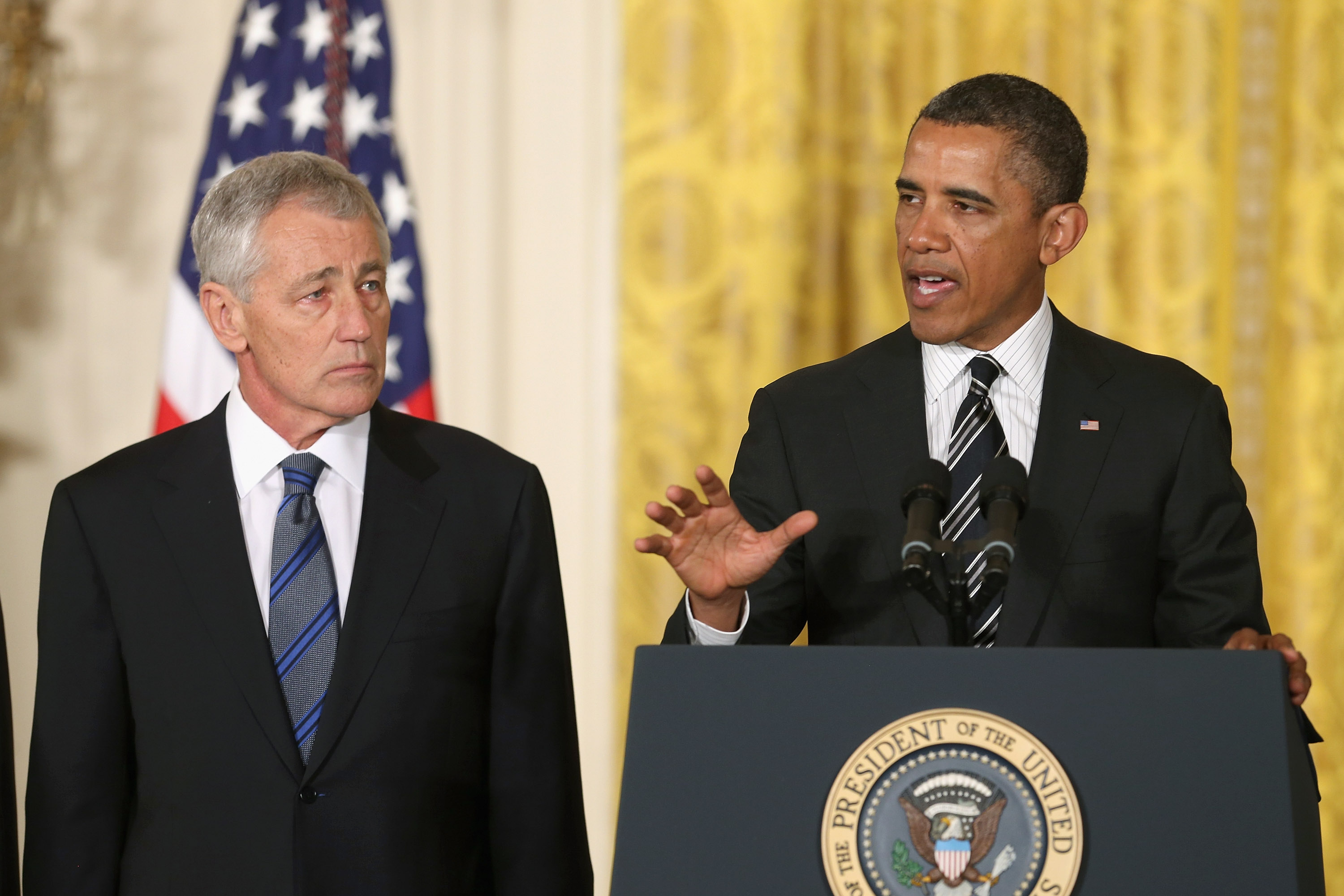 After weeks of speculation, President Obama formally tapped former Sen. Chuck Hagel, R-Neb., to be defense secretary today, inviting a potential nominating battle from members of both sides of the aisle even as he prepares for several tough legislative fights in the coming months.

Mr. Obama, announcing his pick in the White House this afternoon, lauded the Vietnam veteran and two-term senator for his military credentials, his loyalty to the troops, and his willingness to go against the party grain. He also formally nominated John Brennan, a 25-year CIA veteran and his top counterterrorism adviser, to lead the CIA.

"Chuck Hagel is the leader that our troops deserve," Mr. Obama said today in the press conference announcing his decision. "He understands that America stands strongest when we stand with allies and friends... Maybe most importantly, Chuck knows that war is not an abstraction. He understands that sending young Americans to fight and bleed in the dirt and mud, that's something we only do when it's absolutely necessary."

Mr. Obama's announcement promises to be divisive: Even before the decision was official, a handful of Republicans were threatening to pitch a fight over Hagel's nomination, denouncing the former lawmaker's positions on Israel and Iran and in some cases pledging to vote against him.

"I will not support Chuck Hagel's nomination," said Sen. John Cornyn, R-Tex., in a statement released yesterday. "His record and past statements, particularly with respect to rogue nations like Iran, are extremely concerning to me."

Hagel has taken particular heat from the right for having opposed some sanctions for Iran, as well as for taking stances on Hezbollah and Hamas that critics have decried as overly lenient. He has also come under attack for having criticized "the Jewish lobby," which has invoked the ire of pro-Israel advocates. Additionally, he was a vocal critic of former President George W. Bush's policies in Iraq.

"I have serious concerns about positions Senator Hagel has taken on a range of critical national security issues in recent years, which we will fully consider in the course of his confirmation process before the Senate Armed Services Committee," he said. McCain, who led the charge against U.N. Ambassador Susan Rice's potential nomination to be Secretary of State, also said he had "many questions and concerns" about Brennan's nomination.

McCain has had kinder words for Hagel in the past: In July of 2008, McCain suggested that he might offer him a spot in his administration if elected. A month later, however, Hagel said he would not endorse either candidate for president, but did say he would consider being Mr. Obama's running mate if asked.

Democrats are not without their own concerns about the selection: In addition to being a Republican, Hagel has been criticized for making anti-gay remarks in the late '90s. He also authored a resolution opposing the Kyoto climate change treaty in 1997.

Still, there are no indications that a significant contingent of Senate Democrats will go up against Mr. Obama to oppose the nomination. Sen. Ben Cardin, D-Md., said today that while Mr. Obama's decision was "controversial," he believes that Hagel will ultimately make it through the process.

"There are some statements that Senator Hagel has made that he needs to clarify. And we'll see how the confirmation process proceeds if he's nominated," he said today in an appearance on Current TV's "Bill Press Show." Asked if he thought Hagel would be confirmed, Cardin said, "the answer is yes, I think he probably will," but that "It's not a foregone conclusion."

"The Republicans right now seemed to be well organized in opposition. There are Democrats including this senator who have questions that have to be answered before I can support him," he added. "The process is going to have to go forward if the president nominates him."

Amid the ongoing criticism of his past statements on Israel, Hagel defended his views today in an interview today with the Lincoln Journal-Star, and accused detractors of inaccurately characterizing his positions as anti-Israel.

He argued that a fair look at his record would show "unequivocal, total support for Israel," and that there's "not one shred of evidence that I'm anti-Israeli, not one [Senate] vote that matters that hurt Israel," according to the Journal-Star.

"I didn't sign on to certain resolutions and letters because they were counter-productive and didn't solve a problem," he said.

The National Jewish Democratic Council is signaling hedged support for Hagel's nomination, affirming in a statement today that, despite previous concerns, "we trust that when confirmed, former Senator Chuck Hagel will follow the President's lead of providing unrivaled support for Israel -- on strategic cooperation, missile defense programs, and leading the world against Iran's nuclear program."

"Chuck represents the bipartisan tradition that we need more of in Washington," he said today in his remarks. "In the Senate, I came to admire his courage and his judgment, his willingness to speak his mind, even if it wasn't popular, even if it defied the conventional wisdom. And that's exactly the spirit I want on my national security team, a recognition that when it comes to the defense of our country, we are not Democrats or Republicans, we are Americans."