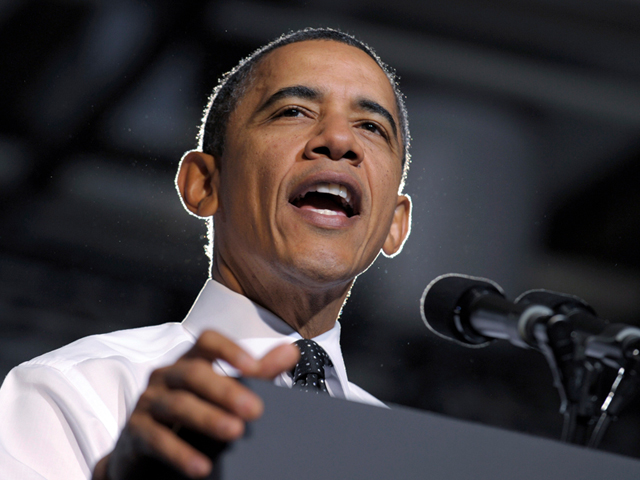 A week after USA Today reported that outstanding student loans would reach $1 trillion before the end of the year, President Obama on Wednesday announced a series of new measures aimed at easing the burden of debt on students struggling to repay their federal college loans.

Speaking to a crowd of college students in Denver, Colorado, the president outlined a new "Pay As You Earn" plan. The proposal would expedite the timeline for an already-approved loan repayment plan that would lower monthly federal student loan payments for Americans whose burden of debt is disproportionate to their earning abilities.

According to the original plan, which Congress approved in 2010, borrowers would be able to reduce their monthly payments from 15 to ten percent of their discretionary income as of 2014. Additionally, that plan dictated that the balance of borrowers' debt would be forgiven after 20 years of payments rather than in 25 years. On Wednesday, the president said he would use an executive order to make those benefits available to borrowers as early as 2012.

The administration's plan would also enable recent graduates to consolidate their loans and achieve lower interest rates, and set up a program aimed at helping students better understand their options when taking out loans.

While outlining the "Pay As You Earn" plan on Wednesday, the president spoke of his own struggles with student debt.

"I know you're hearing stories from friends and classmates and siblings who are struggling to find work, and you're wondering what's in store for your future. And I know that can be scary," Mr. Obama told the crowd at the Colorado University - Denver. "This is something Michelle and I know about firsthand. I've been in your shoes."

The president recalled that when he and First Lady Michelle Obama were married, they had about $120,000 combined in student debt. "We combined and got poorer together," he quipped.

Emphasizing his belief in the importance of higher education as a means to achieving economic growth, the president told his audience that "we want you in school. But we shouldn't saddle you with debt when you're starting off."

According to a new study by the College Board, the increase in average tuition and fees at public four-year institutions has outpaced increases at private nonprofit institutions for the fifth year in a row. The increases exceed inflation rates, the study indicates, and at public and community colleges, costs rose more than eight percent for the 2011 academic year.

"Over the past three decades, the cost of college has nearly tripled," said Mr. Obama. "And that is forcing you, forcing students, to take out more loans and rack up more debt. Last year, graduates who took out loans left college owing an average of $24,000. Student loan debt has now surpassed credit card debt, for the first time ever. Living with that kind of debt means making some pretty tough choices when you're first starting out."

Who will the Obama plan help?

In an interview with Hotsheet, Rep. Steve Cohen, D-Tenn., lauded Mr. Obama for his plan and said the president was "right to give these students a way to pay these loans off quicker."

"These loans can be phenomenally expensive," he said, and argued that borrowers who get buried in debt "never get their foot out of the bucket."

"That's not a fair way to get started," he said.

Robert Shireman, former Deputy Undersecretary at the Department of Education and a chief consultant at the education-oriented California Competes program, said the administration's plan would increase confidence among students about their post-graduate prospects.

"It means people can go to college and use federal loans and have confidence that it's not going to drive them to bad personal situations," he said.

The Obama administration has said that 1.6 million Americans will benefit from the lower monthly payments, and upwards of 6 million can take advantage of the loan consolidations, which will lower interest rates by up to 0.5 percent. Most of those affected will be current students or recent borrowers whose income is sufficiently low upon entering the workforce that monthly payments are a significant financial burden.

Deanne Loonin, an attorney at the National Consumer Law Center who works with clients mired in student debt, said the measures were "a first good step" - but suggested that the spectrum of those who benefit from the plan could be broader.

"It definitely shows that the administration is hearing the voices of financially distressed borrowers," Loonin told CBSNews.com. "But the focus is more on students or student borrowers who have recently taken out loans - it doesn't provide relief for people who have prior loans or who are in default."

Loonin suggested that broader measures are needed to ease the burden of debt - not just for students with federal loans, but also for those with private loans or who are already in default.

The risks of attending a for-profit college

One particular concern is the rise of publicly traded for-profit colleges -- programs like the University of Phoenix, which often serve non-traditional students and confer degrees online -- which has produced a high rate of default among its students.

Loonin said that about 70 percent of the people she works with at the NCLC, most of who are already in default, attended for-profit colleges.

"There's rampant fraud in that sector, and deception," she said. "A lot of people are being deceived into signing up, deceived as to resources, equipment, faculties, and deceived about the prospects at the back end. The for-profit issue is really a consumer fraud issue."

In a Wednesday statement, Sen. Dick Durbin, D-Ill., praised Mr. Obama for his proposal but pointed to students at for-profit institutions as being in need of further government assistance.

"Today's announcement by President Obama is welcome news for the millions of students and recent graduates who are struggling to pay off their student loans. Plans to cap monthly payments, provide greater access to loan repayment programs, aid in the consolidation of student loans and to provide students with more information about financial aid before they go into debt are all important steps to help students manage the skyrocketing costs of getting a degree," Durbin said.

But, he added, "For a growing number of students, this help may not be enough. Students in some for-profit schools are increasingly burdened with massive debt and little to show for their education. Meaningful accreditation standards and safeguards for taxpayer investments need to be put in place to ensure students are getting the best education possible and federal funds are being used fairly and responsibly."

Another group left out of the Obama administration's plan are those who are struggling to pay off their private student debts, which are provided by private lenders like Sallie Mae and Citibank. Private loans are subject to significantly fewer protections than federal loans and typically have variable interest rates.

Cohen is one of a handful of Congress members who are attempting to create a path for students with private student loan debt to declare bankruptcy.

The Tennessee Democrat argues that as the result of the 2005 Bankruptcy Reform Bill, which stripped students of the right to declare bankruptcy on private loans, "the industry is giving out loans to people that may not be as creditworthy as they should be - because they know they can't bankrupt them."

"You ought to be able to discharge those loans through bankruptcy," he said. "Why should private loans be different than debt you can accumulate with a credit card, or at a casino? There's just no good reason for it... It was a really bad bill if you were an average or even a middle-class American. This was done for the industry, not the student."

Cohen has introduced a measure into the House of Representatives that would make it more viable for those with private loans to declare bankruptcy. He noted, however, that the legislation would likely fall short in the Republican-led house. (Durbin has introduced a similar measure in the Senate.)

"We haven't gotten any Republican support" for the bill, he said, suggesting that Republicans were more interested in helping special interest groups than students.

According to Shireman, the former Education Department official, special interests and lobbies representing private loan companies have no real incentive to reverse the 2005 law - but he thought there could still be movement on that issue in the coming years as a result of social pressure.

"Lenders would prefer to be able to hang on to those debts in perpetuity, and not give people a fresh start," he said. But, he added, "when you go back and look at the history, there wasn't previously this kind of debate around" the issue of allowing students to declare bankruptcy.

"If as a society we want to encourage people to take out student loans so they can invest in themselves, we're essentially telling them it's safer to take out a credit card debt than it is student loans," he said. "I think increasingly people will see that."

Sen. Al Franken, D-Minn., who is a co-sponsor on the Durbin bill, affirmed in a Wednesday statement that it's important to help students who are overburdened by debt -- but, he argued,  the real problem is the rapidly-rising cost of education.

"While the actions taken by President Obama are a great first step toward decreasing federal student loan debt, we also need to address the mounting financial burden that private loans are imposing on students and their families," he said. "I've been pushing for student loan reform since coming to the Senate and I will continue to fight for these changes. But ultimately, what we need to address is the skyrocketing cost of college--families simply can't afford to go bankrupt over their kids' education.