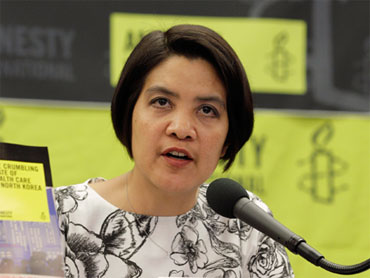 The World Health Organization said Friday that an Amnesty International report critical of North Korea's health system is unscientific and outdated, after it contradicted the rosier picture given by WHO's director-general in April.

WHO spokesman Paul Garwood insisted he wasn't criticizing Amnesty's work. But he said Thursday's report was mainly anecdotal, with stories dating back to 2001, and not up to the U.N. agency's scientific approach to evaluating health care.

"All the facts are from people who aren't in the country," Garwood told reporters in Geneva. "There's no science in the research."

Amnesty's report on Thursday described North Korea's health care system in shambles, with doctors sometimes performing amputations without anesthesia and working by candlelight in hospitals lacking essential medicine, heat and power. It also raised questions about whether coverage is universal as claimed, noting most interviewees said they or a family member had given doctors cigarettes, alcohol or money to receive medical care.

The issue is sensitive for WHO because its top official, Dr. Margaret Chan, praised the communist country after a visit in April and described its health care as the "envy" of most developing nations.

Garwood and WHO spokeswoman Fadela Chaib insisted that Amnesty's report was complementary, and sought to downplay Chan's praise for North Korea while focusing on her outlining of the challenges that North Korea still faces, from poor infrastructure and equipment to malnutrition and an inadequate supply of medicines.

But, whereas Chan had noted that North Korea "has no lack of doctors and nurses," Amnesty said some people had to walk two hours to get to a hospital for surgery. Chan cited the government's "notable public health achievements," while Amnesty said health care remained at a low level or was "progressively getting worse."

Asked Friday what countries were envious of North Korea's health, Chaib said she couldn't name any.

Amnesty did not immediately return a call seeking comment.

The U.N. estimates that 8.7 million people need food in North Korea. The country has relied on foreign assistance to feed much of its population since the mid-1990s when its economy was hit by natural disasters and the loss of the regime's Soviet benefactor.

North Korea, ruled by Kim Jong Il, is routinely described by U.N. and other reports as one of the world's most repressive regimes.

Garwood said Amnesty's research added a needed element to understanding health conditions in North Korea, but added that it didn't even mention recent improvements in the country as the result of a program funded by South Korea and aided by WHO.

The U.N. body claims that maternal mortality has declined by over 20 percent since 2005, and diarrhea cases and deaths in operations have also dropped. It says more than 6,000 doctors and nurses have been trained in emergency obstetric care, newborn care and child illnesses, while clinics have received better material for operations, blood transplants and other medical interventions.

As for Chan's April claim that "people in the country do not have to worry about a lack of financial resources to access care," Garwood said hundreds of missions have been done by various groups providing assistance in North Korea.

"None have come back reporting the kinds of things in the Amnesty report about payments," he said.

"I'm not saying they're not credible accounts," he added. "But it's not taking into account some of the things that are happening today."

One reason for that discrepancy could be that groups fear they will be expelled from the country if they are openly critical of Pyongyang. Chaib noted the importance of WHO's presence in North Korea, where she said officials do their best to save lives despite "persisting challenges."