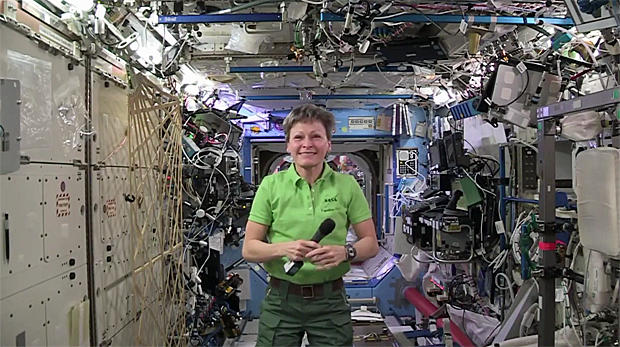 Astronaut Peggy Whitson, making her third flight aboard the International Space Station and her second as commander, already is the world’s most experienced female spacewalker. In a few days, she will become NASA’s most experienced astronaut with more than 534 days aloft.

In an interview Wednesday with CBS News -- the 56th anniversary of Yuri Gagarin’s launch on the first human spaceflight -- Whitson said she doesn’t pay much attention to space records and looks forward to the day when enough women have flown that incremental records like hers won’t prompt questions from reporters.

“It’ll be a real mark when we don’t have to talk about it,” she said.

But given Whitson’s standing in the record books, it could be a long wait.

When she returns to Earth Sept. 3, she will have logged some 666 days aloft, moving her up to seventh in the world with 132 days more than Jeff Williams, the current NASA record holder, and 146 days more than Scott Kelly, who recently completed a nearly one-year stay aboard the lab complex.

“I don’t really know how I got this lucky!” Whitson laughed when asked about her space career. “It’s been amazing to have the opportunities that I’ve had, it’s just amazing to me (how) some dedication and a lot of hard work paid off at the end. It’s just unbelievable.”

And it’s not just cumulative time in space. With completion of her eighth spacewalk March 30, Whitson now ranks fifth on the list of most experienced EVA veterans and No. 1 among female spacewalkers. If she takes part in one more EVA before returning to Earth Sept. 3, she will move up to third all time, behind Russian cosmonaut Anatoly Solovyev and retired astronaut Mike Lopez-Alegria.

When she blasted off Nov. 17 aboard the Soyuz MS-03 spacecraft to begin her third station visit, Whitson’s time in space on two previous flights stood at nearly 377 days, putting her at 29th on the list of most experienced astronauts and cosmonauts. On April 24, Whitson will move past Williams to set a new U.S. record with more than 534 days off planet.

Whitson, who holds a Ph.D. in biochemistry, grew up on a farm in rural Iowa, enjoying star-filled nights that prompted dreams of space. But she never imagined the course her career would take. She credited her journey to hard work and the example set by her parents.

“My work ethic is, I think, from my farm life,” she said. “My parents are the hardest working people I ever knew, they always worked every day, all day, they had to come up with the solutions to make things work. And I think that work ethic, maybe stubbornness, single-mindedness, definitely played a role for me. I’m definitely thankful for my roots.”

Asked if she viewed herself as a role model for girls and young women, Whitson said “it’s not something I think about a lot. But I know the first female astronauts selected were definitely an inspiration to me, and so maybe I will be a role model.”

She said holding space records was not important to her. It’s more important, she said, that humans “continue to progress. We want people to continue learning new things about what space does to the human body.”

“It’s important for us to understand that and make sure when we get ready to fly to Mars that we are ready for what we’re going to be exposed to,” she said. “We’re learning amazing things on the space station now about exercise and how our bones and muscles recover, the effects of fluid shifts on our eyes, we’re doing a lot of really interesting science that’s definitely going to be a stepping stone.”

In addition, the space station serves as a test bed for critical life support technology, Whitson said, and “all of that is going to play key roles in our future missions. I’m really excited about the things that we have going on hp here.”

Whitson and her Soyuz MS-03 crewmates -- Oleg Novitskiy and European Space Agency astronaut Thomas Pesquet -- have had the station to themselves since three other crew members, Soyuz MS-02 commander Sergey Ryzhikov, Andrey Borisenko and Shane Kimbrough, returned to Earth Monday to close out a 173-day mission.

The next Soyuz is scheduled to take off April 20 carrying a crew of two: vehicle commander Fyodor Yurchikhin and NASA flight engineer Jack Fischer. Soyuz spacecraft normally carry three crew members to and from the station but the Russians have opted to reduce their crew size in the near term to save money.

Whitson originally was scheduled to return to Earth on June 2 with Novitskiy and Pesquet but last week, NASA and Roscosmos, the Russian federal space agency, agreed to extend her mission by three months.

Novitskiy and Pesquet will return to Earth June 2 as planned, leaving Whitson behind in orbit with Yurchikhin and Fischer. She will join them for the trip home Sept. 3 aboard the Soyuz MS-04 spacecraft.

Whitson said she and her husband were prepared for an extended mission and that it posed no particular hardship.

Given how fluid space station schedules are, “you can never count on any one thing and counting on something will lead to disappointment,” Whitson said. “So flexible plans for happiness worked out for us. We’re going to be great.”

And it will pay off for NASA as well. Without Whitson on board, the station would be down to two crew members -- Yurchikhin and Fischer -- between June 2, when Whitson’s two Soyuz MS-03 crewmates land, and the arrival of three fresh crew members on July 28.

With Whitson on board, science operations in the U.S. segment of the lab will continue that otherwise would have been curtailed. And NASA can press ahead with the launch of a SpaceX Dragon cargo ship loaded with supplies and scientific equipment.

“Without two U.S. crew members up here, we wouldn’t be able to grapple the vehicle when it arrives,” she said. “So this is great for us. It allows us to continue our cargo processing schedule, get not only the science up but other routine supplies up here. It’s important for the program to continue our scientific research.”

While most station fliers cite the view and living in weightlessness as the most enjoyable aspects of life aboard the lab complex, Whitson said she most enjoys the sense of satisfaction that comes from contributing to spaceflight and exploration.

But living in microgravity ranks right up there.

“The reality of living in an environment that is so different, so foreign to what we’ve grown up with on planet Earth is also very novel and unique and a very special part of our existence up here,” she said.

“The thing I miss the most? I actually enjoy cooking, and I like a variety of things, so I get a little tired of the food up here after a while. So that’s probably the thing I like the least. But they do a great job of trying to get us some variety, and it’s great.”

It's a boy! First baby born with DNA from 3 parents
William Harwood