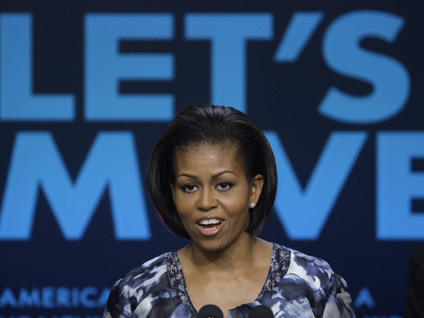 A White House report warns "The childhood obesity epidemic in America is a national health crisis."

The review by the Task Force on Childhood Obesity says one out of every three children is overweight or obese. The task force is a key part of First Lady Michelle Obama's campaign to solve the problem of obesity within a generation.

The report includes familiar themes, emphasizing the importance of improved nutrition and physical activity. It also calls for some new and dramatic efforts to curtail marketing of unhealthy foods.

"We have a roadmap for implementing our plan across our government and across the country," Michelle Obama told reporters today.

But administration officials repeatedly emphasized the effort would rely on "bully pulpit" pressure and not any new federal mandates to push the changes.

Setting the tone for that pressure, the first lady said, "No one gets off the hook on this one from governments to schools, corporations to non-profits all the way down to families sitting around their dinner table."

She said she would "focus my energy" to keep the issue at "the forefront of the discussion in society."

The task force wants junk food makers and marketers to go on what amounts to an advertising diet. It says media characters that are often popular with kids should only be used to promote healthy products. If voluntary efforts fail to limit marketing of less healthy products to young viewers, the task force suggests the FCC should consider new rules on commercials in children's programming. It also challenges food retailers to stop using in-store displays to sell unhealthy food items to children.

But Federal Trade Commission Chairman Jon Leibowitz said, "A regulatory approach is certainly not where we want to start." He told a briefing, "You start by pushing self-regulation, by pushing your bully pulpit; sometimes shaming companies that don't do enough."

Leibowitz indicated the FTC would issue new subpoenas to major food marketing and fast food companies that were questioned in 2005 about their marketing approaches. The FTC chief said the agency would determine whether the firms have honored commitments and "whether we can make them do more."

Leibowitz sees some marketing of healthier foods but he concedes "more needs to be done."

The advisory panel proposes better food content labeling on products and vending machines. Restaurants and vending machine companies are urged to display calorie counts. The experts say the FDA and USDA should cooperate with the food and beverage industries to develop a standard system of nutrition labeling on the front of packages. The study also suggests that restaurants should re-evaluate portion sizes, improve kids' menus and list more healthy food choices.

The task force also sees a potential pocketbook approach to keep people from buying unhealthy foods. It calls for analyzing the effect of imposing state and local sales taxes on less healthy products.

Health and Human Services Secretary Kathleen Sebelius emphasized, "There is no proposal for a federal tax on sugar."

She noted some local governments have seen a possible correlation between a lower use of sugary items and increased taxes on certain products.

Children will likely cheer the panel's call for schools to promote recess for younger students and "physical activity breaks" for upper level grades.

The report found one out of every three children is overweight or obese, conditions that increase their risk of developing diabetes, heart disease and cancer in their lifetimes. The cost of treating obesity-related ailments is estimated to be $150 billion per year.

The task force concludes that strategies listed in the report "should" achieve the goal of solving the childhood obesity problem within a generation. It concedes it won't be easy.