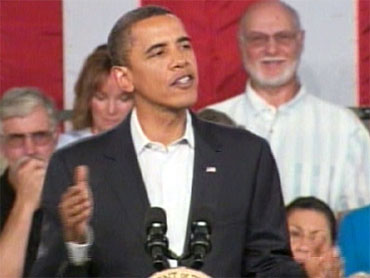 Gibbs was slammed by reporters, however, who questioned whether liberal members of Congress have the president's support as they attempt to legislate dramatic health care reform proposals. Meanwhile, as the administration withholds its clear support for the public option, moderates and conservatives are more boldly opposing Mr. Obama's overall health care agenda.

"The president has said repeatedly that he's open to different ideas and discussions, that his preferred option was the public plan," Gibbs said at his daily press briefing Tuesday, echoing statements he made Sunday on CBS' "Face the Nation".

Yet when pressed on whether the public option is "an essential part" of health reform, Gibbs said no.

"If others have ideas, we're open to those ideas, and willing to listen to those details," he said. "That's what the president has said for months."

The assumed alternative to a public option would be the creation of non-profit cooperatives, an idea being discussed by a small group of senators. Those senators have provided few details on how exactly such co-ops would be shaped; still, a number of liberal congressmen are opposed to replacing the public option with any kind of alternative.

On the other end of the spectrum, Republicans have said the public option would be a dealbreaker. Now, however, Republicans are raising red flags about co-ops.

"The specifics of including a co-op are murky at best," Rep. Tom Price (R-Ga.) said in a statement. "Any Washington control over such a structure would raise immense concern. Patients should be wary of a wolf in sheep's clothing."

The Republican National Committee, in a release issued Monday, accused the White House of "faking center-right" by indicating it may support co-ops. The release, titled "By Any Other Name," suggests a co-op would simply be another form of government-run health care.

Furthermore, Kyl -- who is the Senate Republican whip -- said it would be very unlikely for Republicans to support any kind of health care legislation, regardless of whether Mr. Obama tries to appease conservatives by dropping the public plan or making the bill deficit-neutral.
"There is no way that Republicans are going to support a trillion-dollar-plus bill," he said.

Kyl's comments would suggest that even Sen. Chuck Grassley (R-Iowa), one of the three Republicans attempting to work towards a bipartisan compromise on the issue, would vote against the final bill. Grassley suggested recently that he would not vote for a bill that did not have the support of a number of other Republicans as well.

It is not only Republicans who are more boldly speaking out against health care reform, however.

Rep. Allen Boyd (D-Fla.), who belongs to the moderate Blue Dogs group, said at a town hall meeting yesterday that "the public option is off the table." When asked whether it would be a good idea to "scrap everything" and start the process of reforming health care over, Boyd reportedly said, "I think that is an excellent idea … we may end up there."