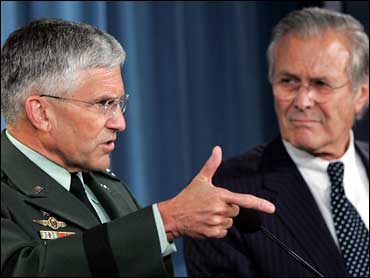 The White House on Monday played down reports that the United States is planning sharp troop withdrawals from Iraq, beginning with the pullout of two combat brigades in September.

"I would caution very strongly against everybody thinking, `Well, they're going to pull two brigades out,'" White House press secretary Tony Snow said.

"Maybe they will, maybe they won't," he said. "It really does depend upon a whole series of things that we cannot at this juncture predict. I would characterize this more in terms of scenario building and we'll see how it proceeds."

"But I'm certainly not going to announce in advance anything that he may have in mind for the president or that he may be recommending," Snow said. "Just don't do that in a time of war."

The New York Times on Sunday first reported the news of a possible plan to withdraw some U.S. troops from Iraq. According to that report, brigades would not be replaced numerically and their duties would be assumed by U.S. forces from elsewhere in Iraq, CBS News correspondent Thalia Assuras reports. The Times also said the Casey plan envisioned eventually cutting U.S. forces from the current 14 brigades to five or six by the end of 2007.

"Everything is contingent on the Iraqi government maintaining viability, and the security forces continuing to improve their credibility with us, that is, getting out there and doing the jobs we are now doing," CBS News analyst Mitch Mitchell, a retired colonel said on the CBS News' The Early Show.

But while two brigades of Iraqi Army soldiers have recently been introduced to central Anbar province, the U.S. commander of the area said last week that Americans would remain in charge for the foreseeable future. More than 5,000 U.S. forces are based in the area.

"I don't think by this winter we'll be quite ready to turn over completely" to Iraqi forces, said Army Col. Sean MacFarland, commander of the 1st Brigade Combat Team, 1st Armored Division that oversees Ramadi and a stretch of farmland leading eastward for about 30 miles.

The central section of Anbar province, which contains the troubled provincial capital of Ramadi, is a haven for the Sunni-led insurgency. Much of Ramadi, Iraq's largest Sunni Arab city with a population of 400,000, has gone unpatrolled by U.S. forces in recent months.

MacFarland's comments were echoed in an interview published Monday in The New York Times with Lt. Gen. John F. Sattler, who oversees Marines in the Middle East and Central Asia.

"I see no reductions in American forces in Anbar into next year, at least through next summer, because of the restiveness there," Sattler was quoted as saying.

"Anbar is going to be one of the last provinces to be stabilized," Sattler told the Times.

Iraq's prime minister, Nouri al Maliki also announced plans for security forces to take control of the country, though without a deadline. That was part of a 24-point national reconciliation plan which would offer amnesty to Iraqi insurgents who renounce violence, Assuras reports.

"To those who want to rebuild our country, we present an olive branch," al-Maliki told applauding lawmakers. "And to those who insist on killing and terrorism, we present a fist with the power of law to protect our country and people."

The much-anticipated plan lacked important details, but issued specific instructions to Iraqi security forces to rapidly take control of the country so U.S. and other foreign troops can leave eventually. It did not include a deadline for their withdrawal.
Responding to the al-Maliki's plan, a key Shiite legislator said Monday that seven Sunni Arab insurgent groups have contacted the government to declare their readiness to join in efforts at national reconciliation, a key Shiite legislator said on Monday.

The seven lesser groups, most of them believed populated by former members or backers of Saddam Hussein's government, military or security agencies, have said they want a truce, Hassan al-Suneid, a lawmaker and member of the political bureau of Prime Minister Nouri al-Maliki's Dawa Party, told The Associated Press.

The contact by the insurgent organizations, which could not be independently verified, would mark an important potential shift and stand as evidence of a growing divide between Iraqi insurgents and the more brutal and ideological fighters of al Qaeda in Iraq, who are believed to mainly be non-Iraqi Islamic militants.

Al-Maliki was considering a possible meeting with leaders of the groups or contacts through intermediaries, al-Suneid said.

He identified only six of the seven organizations by name, listing them as: al-Ashreen Brigades, the Mohammed Army, Abtal al-Iraq (Heroes of Iraq), the 9th of April Group, al-Fatah Brigades, the Brigades of the General Command of the Armed Forces.

The al-Ashreen Brigades operate primarily in Anbar province, the violent insurgent stronghold in the desert west of Baghdad. The organization claims its operations have only been conducted against U.S. forces. They and other insurgents were said to have protected polling places against attacks by other insurgent groups in Anbar province during December parliamentary voting.

The Mohammed Army is made up of former members of Saddam's Baath party, members of his elite Republican Guards and former military commanders. It, too, has focused attacks on the U.S. military and played a role in the November 2004 battle for Fallujah.