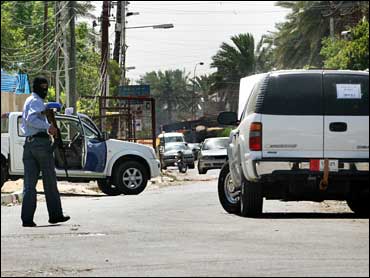 An accompanying statement by the Mujahedeen Shura Council, an umbrella organization linking seven insurgent groups including al Qaeda in Iraq, said all four Russians were killed.

The one and a half-minute video, posted on an Islamic Web site that frequently airs militant messages, showed two blindfolded men beheaded and the shooting of a third man.

In the footage, two men clad in black and wearing black ski masks shout "God is great!" before beheading the first man. Then one militant appears standing over the decapitated body of a second victim in a pool of blood, with the head placed on top of the body.

Both beheadings appear in a closed room with white walls. The shooting appears outdoors in what looked like an alley between buildings.

The footage was stamped with the logo of al Qaeda.

"God's verdict has been carried out on the Russian diplomats... in revenge for the torture, killing and expulsion of our brothers and sisters by the infidel Russian government," the Mujahedeen Shura Council said in an accompanying statement.

The video begins with a verse from the Quran appearing in white letters on a black screen, and a voice reading "Those who aggress on you, you aggress on them."

One at a time, the four men appear on camera, staring ahead and speaking in Russian. Then the camera cuts to the killings.

Four Russian embassy workers were abducted on June 3 after an attack on their car in Baghdad's Mansour neighborhood. A fifth Russian was killed in the incident.

Last Wednesday, the Mujahedeen Shura Council posted a statement on the Internet saying it had decided to kill the four Russians, prompting one hostage's sister, a Muslim, to make an impassioned plea for the men to be freed.

"I beg you to pardon them and release them. You are Muslims, and Islam, before anything else, is a religion of peace and justice," Aliya Agliulin, wearing an Islamic headscarf, said on Al-Jazeera television on June 21, according to an Arabic voiceover of her statement.

"I, as a Muslim like all other Muslims in Russia, feel pain for what is happening in Iraq," said Agliulin, the sister of hostage Rinat Agliulin. "Please act wisely and think of the feeling of the families of the hostages and their children who are waiting for their return... My brother is the lone provider for our family."

Videos of beheadings were an early signature of the Iraq insurgency, as well as a grisly trademark of tapes produced by the late Abu Musab al-Zarqawi. But such graphic images have become rare in the past year.

The exception was a June 10 video showing militants beheading three Iraqis accused of belonging to a Shiite "death squad." Its posting three days after al-Zarqawi's death in a U.S. airstrike suggested an attempt to show his killing had not weakened militants' resolve.