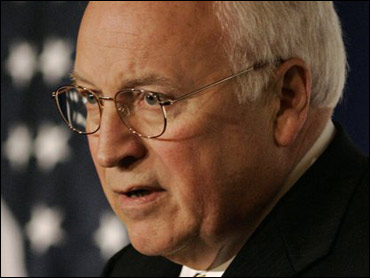 The White House denied Iraqi television reports that Vice President Dick Cheney made an unannounced visit to Baghdad on Thursday.

David Almacy, a White House spokesman in Washington, said Cheney was not in Iraq and that his only currently planned travel to the region is the previously announced trip he will make to Saudi Arabia on Friday to meet the next day with King Abdullah to discuss developments in the Middle East, including Iraq.

State-run Iraqiya TV and the private Al-Arabiya TV station reported that Cheney had arrived in the Iraqi capital on Thursday morning, apparently to visit American troops for the Thanksgiving holiday.

But U.S. Embassy and U.S. military officials in Baghdad couldn't confirm that, and it became clear later that the reports were erroneous.

For security reasons, previous visits to Iraq by President Bush, Cheney and other high administration officials have not been made public in advance, but have been disclosed immediately upon their arrival — regardless of whether they were accompanied by reporters or traveling without a press contingent.

For example, Attorney General Alberto Gonzales traveled unannounced and without reporters to Iraq in August, but his visit was disclosed to the media in Baghdad and Washington immediately upon his arrival.