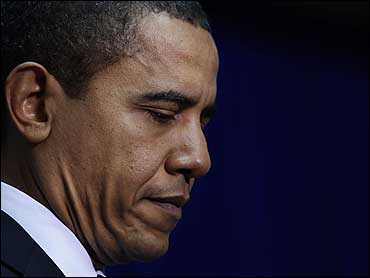 President Barack Obama's top aides have launched their battle to push his ambitious budget package through Congress during a week that has seen further economic erosion, particularly on the stock market.

White House aides blame the Bush administration for creating a situation that made the massive plan necessary and stress that new measures need time to work.

Mr. Obama's proposed budget blueprint for the 2010 fiscal year is a part of a series of efforts to reverse America's harrowing economic slide. But Wall Street remained on edge with both the Dow Jones industrial average and the Standard & Poor's 500 index registering their lowest finishes in more than a decade.

"The budget doesn't look very promising but why would it? [Office of Management and Budget] and Treasury are doing exactly what we got under Bush, which is more government and more waste," Daniel Mitchell of the Cato Institute told CBS News. "The stimulus plan doesn't seem to have worked and the bailouts don't seem to have worked based on the stock market."

But Orszag told Early Show anchor Harry Smith that the administration isn't focused on the daily gyrations of the market.

"We're trying to focus in this budget on tackling the key things that we need to get the economy moving again - jumpstarting job growth and then tackling the long-term problems we face in education, energy and health care and doing it honestly," he said.

While proposing a $3.5 trillion budget, Mr. Obama is also looking for ways to curb wasteful spending to boost Americans' confidence in Washington.

On Wednesday, he was scheduled to outline a plan to change how federal contracts are awarded, saying it would save Americans tens of billions of dollars, the White House said.

Mr. Obama was also turning his attention to global efforts to reverse the economic meltdown, meeting with British Prime Minister Gordon Brown on Tuesday. Answering press questions after their meeting, Mr. Obama compared the stock market to the daily tracking polls used during electoral campaigns, saying that paying too close attention to how Wall Street "bobs up and down" could lead to bad long-term policy.

"We dug a very deep hole for ourselves. There were a lot of bad decisions that were made. We are cleaning up that mess. It's going to be sort of full of fits and starts, in terms of getting the mess cleaned up, but it's going to get cleaned up," he said.

Brown was scheduled to address a joint meeting of Congress on Wednesday. He was expected to urge the United States to avoid protectionism at a time when lawmakers have embraced "buy American" provisions in economic stimulus legislation.

Mr. Obama and his top aides unveiled an outline for his budget package last week, but Tuesday marked the first time lawmakers could publicly question top officials about the details.

4841009Treasury Secretary Tim Geithner, left, told the House Ways and Means Committee on Tuesday that Mr. Obama entered office facing a $1.3 trillion deficit - about 10 percent of the nation's economic output. Republicans have complained that Mr. Obama's budget proposal would swell the deficit even higher, to $1.75 trillion.

Geithner said additional spending is necessary because the previous administration was unwilling to make long-term investments in health care, energy and education.

Similarly, Orszag told the House Budget Committee that Mr. Obama inherited a whopping deficit and an economy in crisis, but that should not block investments in education and an overhaul of the U.S. health care system to help the uninsured.

"We have lived through an era of irresponsibility," Orszag told the House Budget Committee. "Looking forward, we must change course."

Orszag also defended Mr. Obama's plan to raise taxes on people making $250,000 or more, saying the tax policies of President George W. Bush transferred too much wealth to the rich.

Lawmakers in both parties question Mr. Obama's call to reduce high-income earners' tax deductions for the interest on their house payments and for charitable contributions. Also drawing fire is his proposal to start taxing industries on their greenhouse gas pollution - a move sure to raise consumers' electric rates.

Mr. Obama's budget plan drew fire from a senior Republican, who is calling it the biggest expansion of government since President Franklin D. Roosevelt's New Deal. Wisconsin Republican Paul Ryan told Orszag that administration claims of deficit-cutting are mostly bogus since the deficit would fall anyway as the war in Iraq winds down.

The Obama administration has produced a flurry of economic plans and short-term programs in its six weeks in office, in the face of an economic downturn after the nation's housing market began its collapse last year. The bursting bubble threatened the country with a financial implosion and put the economy in reverse despite a $700 billion financial bailout package set up by the Bush administration.

The emergency fund has kept the economy on life support, but Mr. Obama's subsequent $787 billion economic stimulus package has yet to kick in. The president has already set forth a new budget outline that foresees the possible need to spend as much as $750 billion more to prop up America's banks and investment houses.

Mr. Obama has also been working to create more jobs to stem rising unemployment. On Tuesday, he said the new road-building initiative in his stimulus program will create or save 150,000 jobs by the end of next year.

Mr. Obama met with Brown, who is laying the groundwork for the G-20 economic summit of advanced and developing nations in London next month, later Tuesday. The summit, which Brown is chairing, is critical for improving global economic confidence.

The two nations have shared interests on other urgent matters, such as the deteriorating situation in Afghanistan, Iran's nuclear program and global warming. The leaders discussed those issues, but, with the economies of both nations in tailspins, they came up only briefly when they appeared together before reporters.