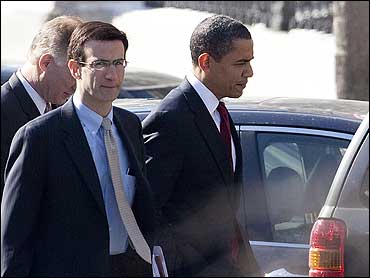 President Barack Obama on Wednesday ordered an overhaul of the way the U.S. government awards contracts for private sector work, reversing a Bush administration policy that in some cases led to federal investigations of procurement practices and no-bid contracts.

Mr. Obama joined Republican Sen. John McCain, his presidential campaign rival, and other congressional figures to announce an executive memorandum that commits his administration to a new set of marching orders for awarding contracts. Mr. Obama said "the days of giving government contractors a blank check are over" and said changes could save up to $40 billion a year.

One area in particular that is targeted is no-bid contracts, which the administration is seeking to change so that there will be more competition for government-paid work.

"Even if these were the best of times, budget reform would be overdue in Washington," Mr. Obama said.

Mr. Obama's presidential memo changes government contracting procedures. It directs Peter Orszag, director of the White House Office of Management and Budget, to work with Cabinet and agency officials to draft new contracting rules by the end of September. Those new rules, White House aides say, will make it more difficult for contractors to bilk taxpayers and make some half-trillion dollars in federal contracts each year more accessible to independent contractors.

"We will stop outsourcing services that should be performed by the government and open up the contracting process to small businesses," he said. "We will end unnecessary no-bid and cost-plus contracts that run up a bill that is paid by the American people. And we will strengthen oversight to maximize transparency and accountability."

The new administration argued that its Republican predecessor's contract spending had doubled to more than $500 billion over the last eight years.

"Far too often, the spending is plagued by massive cost overruns, outright fraud, and the absence of oversight and accountability," Mr. Obama said. "In some cases, contracts are awarded without competition; in others, contractors actually oversee other contractors."

Dozens of people have been charged with bribery and other contract fraud crimes as part of a Justice Department crackdown on contract and procurement fraud. Fraud has been particularly prevalent following the invasions of Afghanistan and Iraq, where billions of dollars was spent quickly and often with little oversight.

More than 140 investigations are under way into allegations of contract fraud in Iraq, Kuwait and Afghanistan.

During last week's White House meetings on the nation's financial future, lawmakers and officials bluntly told top Obama aides that government contracts needed to be handled in a better way. The president's own fleet of Marine One helicopters became an illustration of out-of-control spending.

A review of 95 defense projects by the Government Accountability Office, the auditing arm of Congress, found that the projects exceeded its budget by $295 billion over the course of several years.

"It's time for this waste and inefficiency to end," the president said.

"It's way too soon to be start judging success or failure here. We inherited a big mess. We inherited a trillion dollar gap between how much the economy can produce and how much it is producing," he said.