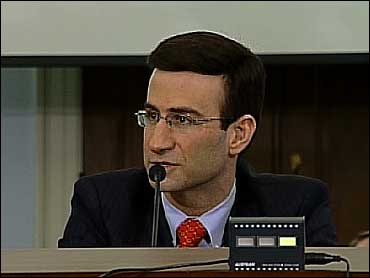 Higher taxes for affluent Americans would not come until 2011 once "we are safely into recovery," Geithner told the tax-writing House Ways and Means Committee.

"I'm confident this is the right path for the country," Geithner said.

But Republicans argued that the portion of the budget that would require polluters to purchase permits from the government for their greenhouse gas emissions would essentially impose huge new energy costs on all consumers and businesses.

"The president's budget increases taxes on every American, and does so during a recession," Rep. Dave Camp, R-Mich., told Geithner.

Camp also complained about provisions that would limit the size of charitable contributions that could be taken by families earning more than $250,000 a year.

Even some Democrats worry the plan may be too bold, reports CBS News correspondent Chip Reid.

"Are you aware that taking on too many issues is this economic recovery plan might sink the whole ship?" asked Rep. Allen Boyd.

But Geithner defended the overall proposal, saying far more people would benefit from lower taxes under the plan. He said the budget reflects what Obama viewed as "a deep moral imperative to make our society more just. But it's very good economic policy too. It will mean there is again a fairer, more equitably shared tax burden on the vast majority of Americans."

"The new administration has inherited an economic crisis unlike any we have seen in our lifetimes," Orszag said in defending the spending and tax levels of the budget.

Some lawmakers challenged the economic projections contained in the budget as far too optimistic.

The budget forecasts that the economy, as measured by the gross domestic product, would only shrink by 1.2 percent this year and then snap back and grow by a solid 3.2 percent in 2010, followed by several years of annual growth of over 4 percent.

That's more optimistic than most private forecasts, and comes despite a new government report showing the economy contracted by 6.2 percent in late 2008, far more than the 3.2 percent drop first reported.

"It does predict a somewhat more rapid recovery" than other forecasts, Geithner acknowledged. But, he added, "I believe this is a realistic forecast," even if it does come at a time of a still-deepening recession.

He promised the administration would "look at this with a cold, hard set of eyes" when it revisits its assumptions at a later point.

Geithner also said the administration will unveil a series of rules and measures in the coming months to limit the ability of international companies to avoid U.S. taxes.

Mr. Obama and his top aides have been promoting the budget package since unveiling an outline last week, but Tuesday provided lawmakers their first opportunity to publicly question top officials over details.

Questioning was pretty much along party lines. Democrats for the most part praised Mr. Obama's proposal.

Mr. Obama's budget faces a difficult path through Congress because of its many controversial proposals on health care, taxes and global warming.

Bernanke, who was appointed to the top Fed job in 2006 by then-President George W. Bush, told the Senate Budget Committee that Mr. Obama's recently enacted $787 billion stimulus package of increased federal spending and tax cuts should help revive consumer spending, boost factory production and "mitigate the overall loss of employment and income that would otherwise occur."

Still, the Fed chief warned that the timing and magnitude of the impact of the stimulus package is subject to "considerable uncertainty, reflecting both the state of economic knowledge and the unusual economic circumstances that we face."

Asked whether Mr. Obama's economic assumptions in his budget are too rosy, Bernanke said although they are a little more optimistic than the Fed's projections, "these things are hard to predict with precision."

Bernanke testified that an economic recovery depends on the government's ability to stabilize weak financial markets.

The economy was taking another hit a day after the Dow Jones Industrial Average plunged below 7,000 for the first time since 1997. Stocks extended their losses in an erratic session Tuesday.

Mr. Obama, speaking with reporters at the White House, brushed off what he called Wall Street's "fits and starts."

He also said that Wall Street has been hammered so hard that "buying stocks is a potentially good deal."

He compared the stock market to the daily tracking polls used during campaigns and said that paying too close attention to markets could lead to bad long-term policy.

Like his economic aides, the president blamed the Bush administration for all aspects of the crisis, reports Reid.

"There were a lot of bad decisions that were made. We are cleaning that mess up," Mr. Obama said.

Mr. Obama wants to reduce the emissions blamed for global warming by auctioning off carbon pollution permits. The proposal, known as cap and trade, is projected to raise $646 billion over 10 years.

Most of the money would be used to pay for Mr. Obama's "Making Work Pay" tax credit, which provides up to $400 a year to individuals and $800 a year to couples. The plan also would raise money for clean-fuel technologies, such as solar and wind power.

"This massive hidden energy tax is going to work its way through every aspect of American life," Rep. Dave Camp of Michigan, the top Republican on the Ways and Means Committee, told Orszag. "How we light our homes, heat our homes and pay for the gas in our cars, in every phase of our daily lives, we will be paying higher costs."

Orszag acknowledged that the energy proposal would increase costs for consumers, but argued that the vast majority of consumers will get tax breaks elsewhere in Obama's budget package.