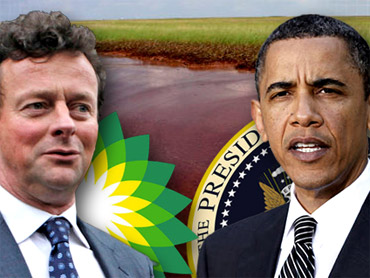 The relationship between the White House and beleaguered energy giant BP may become increasingly combative over the costs of the massive Gulf oil spill, as the U.S. seeks to widen the scope of BP's damage liability.

Efforts to contain the undersea oil leak appear to be progressing, but cleaning up the millions of gallons of oil in the Gulf of Mexico and paying out damage claims to affected residents in the region remains a daunting task for the British energy company.

The oil giant said it expects to spend $84 million through June alone to compensate people for lost wages and profits. That number could grow as new claims are received. When it is all over, BP could be looking at total liabilities in the billions, perhaps tens of billions, according to analysts.

And the pool of claimants may be getting bigger. The U.S. is expected to ask BP to repay salaries of oil rig workers who lost their jobs when the government imposed a six-month moratorium on deepwater drilling.

"The moratorium is as a result of the accident that BP caused. It is an economic loss for those workers, and ... those are claims that BP should pay," White House spokesman Robert Gibbs said Wednesday.

A BP source told Reuters that the company is concerned over the widening scope of possible payments and said it might be heading for a showdown with the White House. The company may argue that the government is responsible for moratorium-related losses, not BP, the source said.

Meanwhile, U.S. Associate Attorney General Thomas Perrelli told a Senate Panel that the Justice Department is looking at the possibility of issuing an injunction against the company to stop paying its dividend.

In New York, BP stock dropped $5.45, or 16 percent, Wednesday - easily its worst day since the April 20 rig explosion that set off the spill. In the seven weeks since then, the company has lost half its market value.

In London Thursday, the stock had dropped as much as 11 percent to a 13-year low at the opening as experts warned dividend payouts would likely be postponed. However, it recovered some ground by midmorning, trading 4.3 percent lower at $5.47, as analysts suggested the sell-off was overdone.

In a statement released early Thursday morning, BP PLC said it isn't aware of any justification for the sharp sell-off in its shares in U.S. trading. The company underlined what it said was a strong financial position in the statement, released just before the London Stock Exchange opened, claiming "significant capacity and flexibility" to deal with the cost of responding to the spill.

But analysts clearly blamed the pressure BP faces from the U.S. government.

"We don't believe BP has a funding issue but given the overwhelmingly hostile nature of the U.S. government the company may decide to suspend payments until the wells are capped and the clean-up sufficiently advanced to convince the US that it can afford all the costs as well as pay dividends," said Evolution Securities analyst Richard Griffith. "Unilateral action against BP over its U.S. operations, be it unreasonable or illegal, hangs over BP."

The Obama administration has ramped up its rhetoric in the last week over BP's spill response. In an interview with with NBC's "Today Show" Tuesday, President Barack Obama said he wanted to learn all he can about he spill in order to "know whose ass to kick."

Fishermen, property owners and businesspeople who have filed damage claims with BP are angrily complaining of delays, excessive paperwork and skimpy payments that have put them on the verge of going under as the financial and environmental toll of the seven-week-old disaster grows.

"Every day we call the adjuster eight or 10 times. There's no answer, no answering machine," said Regina Shipp, who has filed $33,000 in claims for lost business at her restaurant in Alabama. "If BP doesn't pay us within two months, we'll be out of business. We've got two kids."

BP spokesman Mark Proegler disputed any notion that the claims process is slow or that the company is dragging its feet.

Proegler said BP has cut the time to process claims and issue a check from 45 days to as little as 48 hours, if the necessary documentation has been supplied. BP officials acknowledged that while no claims have been denied, thousands and thousands had not been paid by late last week because the company required more documentation.

Allen this week created a team including officials from the Federal Emergency Management Agency to help with the damage claims. It will send workers into Gulf communities to provide information about the process.

Under federal law, BP is required to pay for a range of losses, including property damage and lost earnings. Residents and businesses can call a telephone line to report losses, file a claim online and seek help at one of 25 claims offices around the Gulf. Deckhands and other fishermen generally need to show a photo ID and documentation such as a pay stub showing how much money they typically earn.

To jump-start the process, BP was initially offering an immediate $2,500 to deckhands and $5,000 to fishing boat owners. Workers can receive additional compensation once their paperwork and larger claims are approved. BP said it has paid 18,000 claims so far and has hired 600 adjusters and operators to handle the cases.