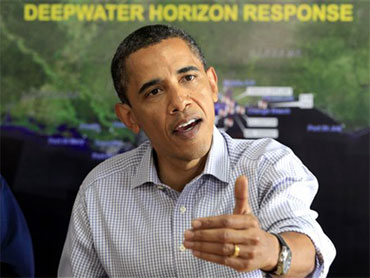 President Barack Obama says his talks with Gulf fishermen and oil spill experts are not an academic exercise. They're "so I know whose ass to kick."

One target for the presidential foot: Tony Hayward, the embattled chief executive of BP.

Mr. Obama was asked by Matt Lauer of NBC's "Today" about Hayward's past comments that "I want my life back," that the Gulf was "a big ocean" and that "the environmental impact of this disaster is likely to be very, very modest."

"He wouldn't be working for me after any of those statements," Mr. Obama said

The interview, which was aired Tuesday on the "Today" show, was part of a stepped-up White House effort to show Obama is actively engaged in dealing with the worst oil spill in the nation's history, and to distance itself from the London-based oil giant, formerly known as British Petroleum. Polls have shown a majority of Americans believe Obama has handled the crisis poorly.

In a CBS News poll released last week, 44 percent of Americans said they disapproved of the president's handling of the spill, with 38 percent approving. In all, 63 percent of respondents said they felt the president could be doing more to address the disaster.

The administration isn't even using the same figures as BP any more for how much oil is flowing from the blown-out well and how much is being captured.

Coast Guard Adm. Thad Allen told a White House briefing Monday that a cap on the damaged oil well is now keeping up to 462,000 gallons of oil a day from leaking into the Gulf, up sharply from previous amounts.

But his figures conflicted slightly with BP's numbers. In a statement, BP put the amount being captured at 466,200 gallons. Allen said the government was using its own flow-rate calculations and no longer wanted to rely on those from BP.

Allen also said the nature of the cleanup effort presented its own challenges.

"We're no longer dealing with a large, monolithic spill," Coast Guard Adm. Thad Allen said Monday at a White House news conference. "We're dealing with an aggregation of hundreds of thousands of patches of oil that are going a lot of different directions."

Mr. Obama met Monday with his Cabinet and Allen for a briefing on the oil spill, which began April 20 with an explosion and fire that killed 11 workers on a BP-leased rig.

In remarks after that meeting, Mr. Obama sought to reassure the nation that the Gulf Coast would "bounce back" from the spill - but not without time, effort and reimbursement from BP. BP is the majority owner of the oil well that blew, but other energy companies are also partners and will bear proportionate financial responsibility.

Mr. Obama said the economic impact of the spill would be "substantial and ongoing," and said that even if containment efforts are successful, "are not going to have this problem solved until we have the relief well completed."

Mr. Obama stepped up his rhetoric with NBC's Lauer while on a trip to Kalamazoo, Mich., to deliver a high-school commencement address.

He strongly defended his role in dealing with the crisis, including his three visits to the region since the spill began.

"I was down there a month ago before most of these talking heads were even paying attention to the Gulf," Mr. Obama said.

The president said he has talked to a variety of "experts" on the oil spill in addition to the fishermen.

"I don't sit around just talking to experts because this is a college seminar, we talk to these folks because they potentially have the best answers - so I know whose ass to kick," the president said.

Asked about the damage the crisis was doing to his presidency, Mr. Obama said, "... I'm not concerned about my politics right now. I'm concerned about what's happening down in the Gulf. ... This is the largest federal response to an environmental emergency in history. From Day 1, we understood that it was going to be a major disaster."

He said he understood people's frustration over the problem, but said the pressure the administration is feeling can be explained in part by unrelenting television images of spewing oil, sullied beaches and soaked pelicans.

"I have to tell you, some of this is just the nature of the 24-hour news cycle," Mr. Obama said.