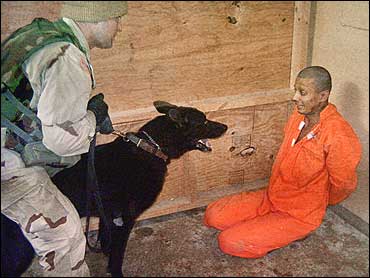 (AP/Washington Post)
A report in London's Daily Telegraph today, citing retired Major Gen. Antonio Taguba, alleges that among the photos President Obama wants to keep from the public are images that show American soldiers raping detainees as well as "sexual assaults on prisoners with objects including a truncheon, wire and a phosphorescent tube."

Both the Pentagon and the White House today disputed the report and criticized the newspaper from which it came. But they stopped short of suggesting that the photographs do not exist.

Pentagon spokesman Bryan Whitman said the Telegraph "has completely mischaracterized the images." He added: "None of the photos in question depict the images that are described in that article."

"If I was looking for something that bordered on truthful news, I'm not entirely sure it'd be the first stack of clips I picked up," he said. Gibbs went on to say that "you're not going to find many of these newspapers and truth within, say, 25 words of each other."

Echoing Whitman, he also said that "none of the photographs in question depict the images described in the article."

But those comments leave some wiggle room.

Taguba investigated abuse at Abu Ghraib, but it is not clear that he was privy to the detainee photos the president wants kept classified. Those pictures, which allegedly depict abuse at various facilities in Iraq and Afghanistan, are what Whitman and Gibbs are referring to when they discuss the photos "in question."

The Telegraph suggested in its report that the photos detailed by Taguba come from the set of photos the president wants classified, though this seems unlikely. As the Associated Press points out, the request for those photos by the American Civil Liberties Union came in October 2003, before the revelations of abuse at Abu Ghraib.

So when Whitman and Gibbs say none of the photographs "in question" depict rape and the other abuses detailed by Taguba, they appear to be on solid ground. But that does not mean that the photos do not exist – only that they are apparently not among the pictures covered by the ACLU request.

The Pentagon's Whitman said he was not aware of the pictures reportedly detailed by Taguba, though he did not say categorically that they do not exist - only that "to the best of my knowledge" all the Abu Ghraib photos are "out there." The same goes for Gibbs, who focused on the Telegraph report, not the photos themselves.

Allegations of the sort of abuse detailed by Taguba have surfaced over the past few years; in 2004, the New Yorker's Seymour Hersh, for example, suggested in a speech that the Pentagon has video of boys being sodomized by members of the military.

Taguba told the New Yorker in 2007 he had seen video of a soldier sexually abusing a female detainee. CBS News has left messages for Taguba seeking clarification, but has not yet received a response.