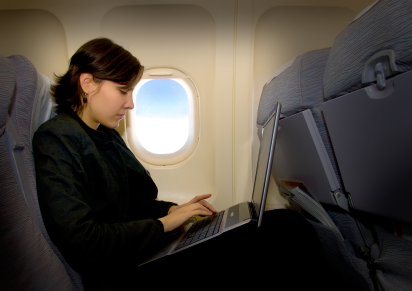 Go ahead and grumble that the legroom would squeeze Toulouse-Lautrec, and the security lines move slower than a Mumbai traffic jam. Because now, frequent flyer, you finally have something to be grateful for: the emergence of Wi-Fi in the sky. More than 750 commercial U.S. planes — roughly 30 percent of the domestic fleet — are now outfitted with either 3G cellular service or satellite delivery systems, providing a lot of bandwidth for downloading movies or sending emails.

This being the airline industry, of course, you can't expect a new service to roll out perfectly smoothly. For now, the industry makes it all but impossible to know you're booking a plane with Wi-Fi. In some cases, you won't even know until you see the sign onboard the plane.

Even so, things are moving in the right direction. The first airlines to add Wi-Fi were American, Delta, and Virgin America, all of which began rolling it out in 2008. With two industry heavyweights and one smaller but flashy upstart carrier beaming broadband from the skies, the rest of the industry began to follow suit. Today, Virgin and AirTran offer Wi-Fi on all domestic flights, and every competing U.S. airline has launched Wi-Fi in some of its planes or plans to soon, and most are working towards total coverage. (For the state of Wi-Fi penetration in domestic carriers, see this chart.) By the end of the year, in-flight Internet should become as commonplace as in-flight magazines.

So at this point, there's no turning back. People want it. In late 2009, Virgin surveyed its frequent flyers and found that for the majority of them, Wi-Fi availability would influence their choice of airline.

"Travelers want to do in the air what they've become accustomed to do at any Starbucks," says Niels Steenstrup, vice president of marketing for Aircell, the largest Internet service provider to the airline industry. "We get two reactions. 'Wow, there's Internet,' and 'Of course, why wouldn't there be?'"

The in-flight Internet boom was supposed to have occurred a decade ago.In 2000, Boeing launched a business called Connexion by Boeing to bring high-speed Internet access to the nation’s jetliners. Boeing eventually partnered with a number of airlines, but the timing — spring of 2001 — couldn’t have been worse. The terrorists’ attacks of 9/11 caused every airline to pull out of the venture except for Germany’s Lufthansa. At the same time, there were major technical hurdles in deploying the service; each plane had to be outfitted with antennas that cost about a half a million dollars, took several days to install and created an estimated 800 pounds of drag. In 2006, Connexion called it quits.

But something else happened that year that was critical in ushering in the high-altitude Wi-Fi movement. The Federal Communications Commission (FCC) auctioned off blocks of a spectrum previously reserved for analog radiotelephony so that it could be repurposed for digital air-to-ground bandwidth. Remember those seatback Verizon AirFones? They cost a fortune, and few people ever used them. So the FCC put the spectrum they used on the block.

Aircell still had a ton of work to do to make its Wi-Fi service plausible. The company spent about a year and a half building out a field of 100 cell phone towers across the country, each pointing up, and each with a 250-mile radius of coverage, essentially blanketing the entire continental U.S. airspace. (Only Lufthansa offers intercontinental coverage on its flights, and it does so via satellite).

Aircell also conquered the problem of weight and long installation time that was so problematic for Connexion by Boeing. Instead of a single giant antenna, it installs three small antenna fins: two on the bottom of the plane to send and receive signals from the network, one on top for GPS to let the system know when to switch on at 10,000 feet and locate the nearest tower. Collectively, the whole system weighs only about 125 pounds. Aircell also equips each plane with a server needed to distribute the signal throughout the cabin, and here’s the really impressive part: Aircell’s team has dwindled the installation time for an entire jet down to a single night, which is critical because the airlines lose money whenever a plane is out of commission.

One drawback with Aircell’s air-to-ground system is that it cannot reach planes over water or more than 200 miles into Canada or Mexico. That’s where its closest competitor, Row 44, is trying to swoop in and differentiate itself by offering satellite-based service reaching these spots. The satellite service costs more upfront to install but ultimately it lets carriers control the cost for passengers; Aircell’s service, on the other hand, dictates the price point. With small variations, it ranges from $4.95 to $12.95 per flight, or $29.95 for a 30-day pass on a single airline. Only Southwest Airlines has opted for Row 44’s system, starting to outfit its entire 540-plane fleet in the second quarter of this year. (Row 44 lost its only other domestic contract for Alaska Airlines to Aircell in March.)


While the rollout is going strong — everyday Aircell adds its service to between one and five planes a day — none of the airlines allow booking customers to request a flight equipped with Wi-Fi. American offers a Wi-Fi Widget on its website for customers to check if their flight is equipped, but you can only figure that out within 24 hours of your flight. Really the best you can do is learn which airline has it on what kind of plane and make sure you book that. (Check out our chart here.)

The airlines would be wise to promote this better. If nothing else, the flight attendants would be happier. “One funny upside,” says Aircell’s Steenstrup “is that Wi-Fi is creating happy passengers.”