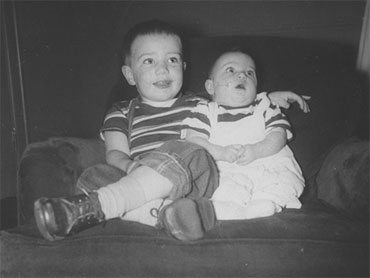 "Where's Molly?" is the poignant question a little boy used to ask many years ago. The answer to that question was a long time coming. Our Cover Story is reported by John Blackstone:

If a picture is worth a thousand words, then the pictures of the Daly Family in the 1950s tell the story of a typical American family: The handsome husband, the perfect wife, and the happy kids.

But then, the pictures change . . . and a family secret was born.

When older brother Jeff was 6, Molly disappeared. For a while Jeff asked constantly: "Where's Molly?"

He stopped asking after being told repeatedly by his mother he had to forget his baby sister.

"I was fairly, you know, fairly well brainwashed," Daly said. "I think I can say that Molly never crossed my mind for 20 years, maybe 30 years. I mean, she effectively had been shoved away. I'm told I can't do anything more. So, when I hit my teenage [years], my 20s, my 30s, I never really thought about Molly."

That is, until someone else from his past came back into his life.

Cindy Thompson grew up with Jeff in Astoria, ore. The two even dated in middle school. They met again, in 1994, after their 25th high school reunion.

"I had not seen him in probably 25 or 30 years," said Cindy. "And just naturally thought that he had contact with his sister."

"And one of the first things she said to me was, 'How's your mom? How's your dad? And what's Molly doing?' And I almost fell off the chair," Jeff said. "'How, how do you remember Molly?'"

"I said, 'Everybody knew about Molly,'" Cindy said. When Jeff asked her what she knew about his sister, Cindy replied, "Well, she was sent away. I don't know where she went. And I never heard what happened to her. Is she still alive?"

Jeff didn't know. He said it almost ended his relationship with Cindy right there: "Cindy was so upset saying, 'How could you not know where your sister is? How do you not know how she's doing?'"

Jeff and Cindy's relationship grew, and they got married. But it would take another 10 years before the mystery of Molly's disappearance began to unravel.

And it was only after Jeff's parents, Sue and Jack, passed away . . .

"When my father died, Cindy said, 'Time's up. I'm gonna find Molly,'" Jeff recalled. "And we actually found in his wallet a little card that was sort of a cheat sheet. It had his parents' birthdays and Social Security numbers. It had mine. It had Molly's name, Molly's Social Security number and her birth date."

Turns out, Jack Daly also kept a file hidden away about his only daughter. And within 24 hours of Jack's death, the mystery of "Where's Molly" was solved.

Cindy Daly started making phone calls, and on her third call she found the group home in Hillsboro, just outside of Portland, where Molly was actually living. 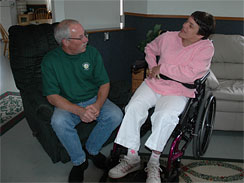 (CBS)
Three days later, Jeff Daly reunited with the sister he last saw when she was just shy of her third birthday.

Molly was now a 49-year-old woman.

"I wasn't sure what to expect," Jeff said. "But the first time I saw her, it was pain. I felt pained that I hadn't seen her. I knew that I was wrong."

"Knew that you were wrong not trying to find her sooner?" asked Blackstone.

"Yeah, that here, indeed, is this individual that has personality, and she's my sister. And I let her go for 47 years without ever being part of our life."

Because Molly couldn't tell Jeff and Cindy about those missing 47 years, they set about filling in the details, which brought them to the institution where Molly was sent back in 1957: the Oregon Fairview Home.

Fairview has now been closed for almost a decade. The buildings where Molly and thousands of other children lived are in decay. But a film that shows what life was like here in the 1950s gave Cindy and Jeff a disturbing look at how Molly spent her childhood here.

(CBS)
And the last thing Jeff and Cindy expected to see in the beginning of "Fairview 1959" was Molly herself, at age 5.

"When we saw that, we crumbled," Jeff said.

At the time, the film was meant to be a testament to the state-of-the-art care given to patients with intellectual disabilities.

Fairview, founded in 1907, was originally named the "Oregon State Institution for the Feeble-Minded." And it was hardly alone. By 1962, there were 123 state institutions around the country.

James Trent, a professor at Gordon College and the author of a history of America's treatment of those once called "mentally retarded," says Molly's parents undoubtedly acted on what was common advice in the 1950s.

"After World War II in the early '50s, you increasingly had physicians who would tell parents to put their children almost immediately in institutions after they were born if they had an apparent disability," Trent said.

Jeff Daly says that was the way it was done with his sister: "The doctors told my parents, 'It's okay. Let Molly go to Salem. She'll be in an institution. She'll be better off there.'"

But as the Fairview film painfully illustrates, Molly was not better off.

Jeff says that while Molly had some minor disabilities, he believes that when she went into the institution she became "institutionally retarded."

"The environment created her, forced her into being what everybody else in an institution was, which were people surviving," he said.

In combing through Molly's records, the Dalys discovered that, despite the family mandate to forget her, through the years, Molly did have some family visitors.

"My mom went there once from what we understood," Jeff said. "We just found a little note in her records that mother had visited. But, other than that, she didn't visit."

"Was it shame that kept your mother from doing this?" Blackstone asked. "Was it just that she didn't want to acknowledge even Molly's existence?"

"I just have a hard time understanding," Jeff said. "To send her away and say, 'No more conversation. She is not part of our lives. We're not gonna talk to her about it.' So, whether that's shame? It's a horrible dilemma I think that my mother had to go through."

And at first, Molly's father visited often, until Fairview's staff advised him to stop, because Molly would become inconsolable after he left.

But Jack Daly found an ingenious way to continue seeing his daughter... 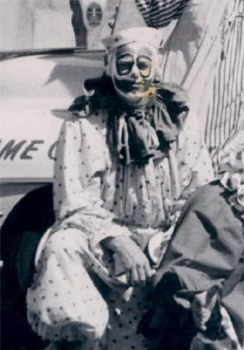 (CBS)
"He did go back," said Jeff. "It was only a way that I suppose my dad could have figured out. He went back as a clown."

Jeff's father - an executive at the Bumblebee Seafood Company - founded a troupe called the Astoria Clowns in 1957, the very year Molly was sent away. The troupe traveled around Oregon, marching in parades and entertaining children wherever they went.

And they visited Fairview.

"He was able to have this relationship with Molly in disguise: Painted face, an orange wig, wearing the clown outfit," said Jeff. "But he was able to still get back there and see his daughter."

By profession, Jeff was a freelance cameraman who sometimes worked for CBS News. Now, he's made a film called "Where's Molly" about the search for his sister. He hopes his story encourages others to reunite with siblings lost because of the wisdom of earlier times.

He's failed, however, to convince his own younger brother, Tim, to spend time with Molly.

"I've not only lost my brother now, but, he's missing - he's missing out on a great opportunity to have a sister," Jeff said.

For Jeff, finding his sister has done much more than solve a mystery... according to his wife Cindy, he's changed immensely. "He has, as one person said it, 'filled a hole in his soul.' And it really did."

"I have family," Jeff said. "I've lost some family. But I've got family. And I think that the family that I have now needs me, and I'm glad to be there for her. That's the beauty of it. It's a lovely reward to be able to give back and to take care of your little sister."