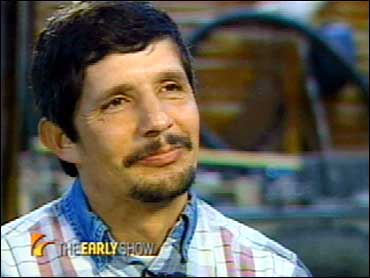 Way up in the Texas panhandle and way back at the end of the phonebook, CBS News Correspondent Steve Hartman found a 39-year-old city maintenance worker named Jose Vaquera.

Jose has a disarming smile, a charming wife, and an alarming number of mouths to feed. A family of 7 - who all love to talk, with one notable exception ...

Jose can't really begin to tell who he is. And it is not just in English, in Spanish, too.

"I mean a 2-year-old can put sentences together better than what he can," says his wife, Sally.

"Always talking. He was always talking," says Sally adding he used to be the life of the party - and a part-time preacher -- until March 12, 1988, when Jose lost his voice and a whole lot more. He was driving his father-in-law and coming over the hill on the wrong side of the yellow was a drunk driver who plowed into Jose head on.

"And the seatbelt damaged his artery and had a blood clot ... he had a stroke" explains Sally.

It severely damaged the part of his brain responsible for speech. Therapists have brought him a long way.

"He wasn't even able to make a sound. You know when a baby is born he can cry. When he cried he wouldn't make a sound. And at first he did quite a bit of crying because he knew my father had passed away," says Sally.

The Vaqueras always believed that God had a purpose for everything.

And although they never found any reason for this, Jose thinks he now knows what God wanted with him.

"You could say I have," says Sally.

As to which one she likes better?

"Communication-wise, the first one. Personality and caring-wise, the second one," she answers.

While Jose looks at an old picture of his wife Sally, a word comes out of his mouth: "Skinny."

Of course, like any husband, sometimes ... even Jose says too much.

"Skinny! What are you trying to tell me," says Sally. "You're going to get yourself in trouble if you make another comment like that."

But if you ask him how much he appreciates his second chance -- Jose is speechless. Then again, who wouldn't be?