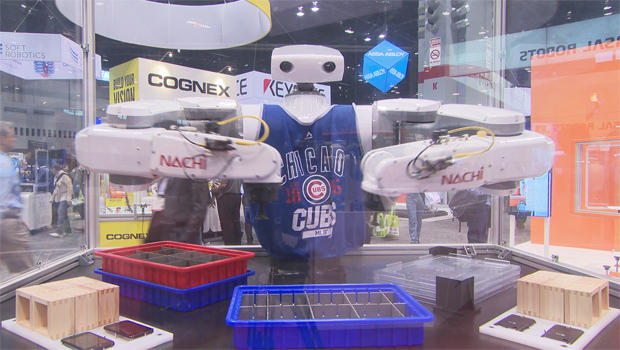 By every measure, our country is on the road to becoming an AUTOMATION NATION. Our Money Issue Cover Story comes from David Pogue of Yahoo Finance:

Tony Hughes has been a long-haul truck driver for more than 20 years. But today, all he has to do is sit back and relax.

Today, he’s hauling 20,000 pounds of freight down the Florida turnpike in a self-driving, robotic truck. It’s been retrofitted with a self-driving kit made by Starsky Robotics.

Stefan Seltz-Axmacher, who founded the company in 2016 with Kartik Tiwari, said, “We think that sometime towards the end of the year, we could be doing this run without a person behind the wheel.”

And if it’s not his company, it might be Otto, whose truck made headlines last October by driving itself across Colorado to deliver a shipment of beer. Otto is owned by Uber, which also has been testing self-driving taxis in Pennsylvania and Arizona.

But here’s the thing! Once our trucks and taxis drive themselves, what will happen to the people who used to do those jobs? In the U.S., that’s 180,000 taxi drivers, 600,000 Uber drivers, and 3.5 million truck drivers.

“We really need to start to think very seriously about this,” said Martin Ford, author of the book “Rise of the Robots” (Basic Books).

Ford says driverless cars and trucks are just the beginning of a wave of automation that will threaten millions of jobs, in every industry at once, like America’s nearly five million store workers.

Later this year, shoppers in Seattle will be able to walk into the first Amazon Go grocery, take what they want, and walk out again, without ever encountering an employee.

Sensors will detect what you take and bill you automatically.

“The cashiers are totally gone,” Ford said. “You’re going to end up with the equivalent of a Walmart with a handful of employees. You scale that out, and that’s just extraordinarily disruptive.”

Name an occupation, and there’s somebody considering a robot to take it over.

At Zume Pizza in Silicon Valley, four specialized robots help make the pizza. Eventually, the company plans to replace the remaining humans on the line, too.

Pogue said, “You would think there would be some Roman pizza chefs who’d say, ‘No, this is not the way it’s been done since our ancestors!’”

“Well, the world changes,” said Zume’s chief technology officer Josh Goldberg. “There’s a lot of other things we don’t do just the way our ancestors did, either.”

Wait, wait, wait. Certainly not journalism? “Oh, yeah. Absolutely,” Ford said. “By one account, every 30 seconds there’s a news story published on the web, or maybe in a newspaper, that’s machine-generated.”

Algorithms are even threatening the Masters of the Universe. Two weeks ago, Black Rock, the world’s largest money manager, announced that it’s laying off dozens of human stock pickers and replacing them with robots. By 2025, across the financial industry, artificial intelligence is expected to replace 230,000 human workers.

“Bring on the disruption that is automation,” said Elisha Wiesel, the chief information officer at Goldman Sachs. The company now hires nearly as many computer engineers as financial workers.

“In the movie ‘Wall Street,’ they would have been barking, ‘Buy! Buy! Buy!’ into the phone,” laughed Pogue.

A quarter of the people on the famous Goldman Sachs trading floor aren’t traders; they’re coders, writing software to automate the routine grunt work of employees all across the company.

Pogue asked, “Someday, could software replace the functions of these folks?”

“That’s a great question; I don’t think anybody knows the answer,” replied Wiesel.

All right, we get it; no job is safe. According to a recent study, 47 percent of American jobs could be lost to automation in the next 20 years.

Ford says it’s time to start thinking about what we’re going to live on, in the post-robot economy. One of the best ideas out there, says Ford, is a universal basic income, or a guaranteed minimum income.

“Right. I think a better way to think of it is in terms of the idea that we built this tremendously prosperous society. Everyone ought to have, if you’re a citizen at least, some sort of ownership stake in this.”

“But the purpose of having a job is not just to have income. It’s also meaning and purpose and a place to go every day.”

“That’s right. That’s going to be a real challenge, but I think it’s a challenge we can solve,” said Ford.

Ah, but wait! Most experts do agree that automation will soon take over a lot of our jobs. But they don’t all agree that that will mean mass unemployment, including MIT economist David Autor.

“History has suggested that the pessimists have been wrong time and time again,” he said. “The last 200 years, we’ve had an incredible amount of automation. We have tractors that do the work that horses and people used to do on farms. We don’t dig ditches by hand anymore. We don’t pound tools out of wrought iron. We don’t do bookkeeping with books! But this has not in net reduced the amount of employment.”

Autor also points out that the changes won’t happen overnight: “I’m sure 20 years from now, almost no one will be driving a vehicle. Young people are forward-looking, and they say, ‘Well, I guess I’m not gonna have a driving career, so I’m not gonna go there.’”

Autor replied, “So let’s do the following thought exercise, right? It’s the year 1900, and 40% of all employment is in agriculture, right? And so some twerpy economist from MIT teleports back in time to Farmer Pogue here, and says, ‘A hundred years from now, only 2% of people will be working in agriculture.’ What do you think the other 38% of people are going to do? You wouldn’t say, ‘Oh, search engine optimization. Health and wellness, software and mobile devices.’ Most of what we do barely existed 100 years ago.”

In other words, just because we can’t predict what we’ll be doing, doesn’t mean we’ll be doing nothing. And sure enough. despite having replaced so many stock traders with software, Elisha Wiesel says that Goldman Sachs still employs the same number of people -- and that their jobs have been enhanced by automation.

“And all of a sudden, that young person is engaging with the client on their actual problems, rather than being stuck till 1:00 a.m. doing nothing but manning several different spreadsheets and trying to corral all this data together,” said Wiesel.

You’ll hear the same argument at Starsky Robotics. Its trucks will self-drive only on the highways. The company will still employ human drivers, but they’ll sit in front of screens, driving the trucks by remote control once they’re off the highway.

And if Tony Hughes can keep his job without the weeks away, “in that aspect,” he said, “it’s going to make my life better.”

If he gets hired to be one of the remote-control pilots, right? “Oh, well, he’s on the top of the list,” laughed Starsky Robotics’ Stefan Seltz-Axmacher.

So, since this might be Pogue’s last chance to be in a truck with a human driver, he asked Hughes to blow the horn. “I’d like to see a robot do that!”