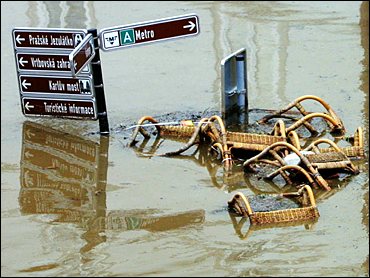 Deadly floods in Europe and Asia. Drought in America. The daily drumbeat of severe weather has millions wondering if something strange is happening.

Added Jay Lawrimore, chief of climate monitoring at the government's National Climatic Data Center in Asheville, N.C.: "We've had these type of events in the past. We're going to have them in the future."

He cautioned not to "take one particular event or a series of events and attribute what's happening to climate change." Looking ahead to the effect of continued change, he said, "It would not be unexpected to see more instances of extreme weather — more droughts, more flooding."

Hurrell also did not want to tie global warming and specific events, but noted that with global change, wet areas would tend to be wetter, dry ones drier.

The warming of climate over the past 100 or so years can lead to dry conditions and cause more evaporation of water, increasing the amount of moisture in the air for rainstorms.

"We have found there's a trend toward heavier precipitation events in the past 50 to 100 years, so when we see events like this happening it doesn't surprise us," Lawrimore said.

So is there a specific cause for last week's European floods?

Hurrell cited the North Atlantic Oscillation, a weather pattern in which high pressure and low pressure centers over northern and southern Europe tend to alternate.

In the past few weeks, the centers switched, moving a low pressure to the south and bringing with it stormy weather. This also resulted in storms moving across warmer parts of the Atlantic where they could collect increased water from evaporation, Hurrell said.

Lawrimore said there was a shift in the jet stream — fast-moving winds high in the atmosphere that can steer weather patterns around the globe.

The jet stream shifted a bit farther south than usual to help bring along low-pressure systems. Low pressure generally is an indication of storminess.

While the floods currently devastating cities in the Czech Republic, Germany, Russia and elsewhere in Europe are severe, major floods have hit before.

"Certainly the flooding that is going on in Europe is very bad, but if you go back, parts of Hungary, parts of Poland last year, parts of Siberia had severe flooding. It certainly wasn't quite this severe, but it's not uncommon," Lawrimore said.

In China, too, unusual and deadly weather is under way with killer floods in normally dry regions. Chinese government experts say the events are an unusually strong manifestation of global warming.

"Global climate change ... has caused these extreme events," said Ding Yuhui, special adviser on climate change for the China Meteorological Administration. "It has caused a lot of extreme conditions and amplified the anomalies."

The long-term drought has affected some areas of the United States since 1998, though not as severely as in the 1930s, Lawrimore said.

"There are a number of factors involved there, it's really difficult to pinpoint," he said.

"We've had over the last several years a general, persistent trough over the central U.S. with the (storm) systems not making it into the Southeastern U.S., and so we've had month after month of low or no precipitation. Likewise, in the West, we just haven't had the systems there bringing the average or normal amounts of moisture."

The National Climatic Data Center is part of the government's National Oceanic and Atmospheric Administration. The National Center for Atmospheric Research is a cooperative research center operated by a coalition of universities and the National Science Foundation.