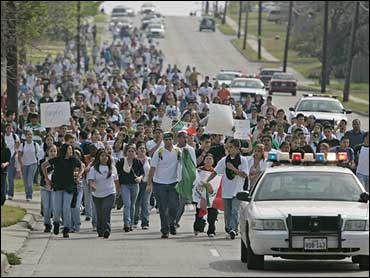 I just returned from Paris, where I spent four days with the leaders of the student movement against the new employment law. I got a bird's-eye view of the whole operation, and I'd like to clarify a few things that the mainstream media has gotten completely wrong.

This was not a violent protest: The headline of the AP's report from yesterday was "Latest Paris Demonstration Turns Violent." It is hard for me to express how little this headline represents what actually happened. I did not see one single instance of violence throughout the entire seven-hour march. The vast majority of the violence that did occur happened after the march when people were dispersing and violent kids(aka casseurs)— who were for the most part entirely apolitical — appeared to wreak havoc.

These kids had nothing to do with the movement; they just wanted to smash things and clash with the police. Unfortunately, the violence-obsessed media has made them half of the story, when they are not even one-hundredth of the story. The story is that one million young people took to the streets to fight for their future.

The movement is not a white, middle-class movement: The MSM, especially the Times, has painted these kids as uppity, white college students protecting their own interests. This is not the case at all. The kids from the suburbs — who are largely poor black and Arab kids — were out in full force. I have never seen a protest movement in the U.S. that was even marginally as diverse as this protest.

This is not a frivolous movement: Almost every article I've read in the U.S. press says something along the lines of "Oh, the French and their silly protests." Many papers have created the impression that the youth are just using an excuse to skip school and drink beer on the streets. Again, not the case at all. Almost without exception, the kids I spoke to were extremely intelligent, deeply knowledgeable about the CPE law, French unemployment, and well-versed in economics. They are not protesting "for the hell of it" — they are on the streets because they feel that the government is stripping them of their rights and their dignity. They are incensed that the French government is creating laws that will dictate their futures without consulting them at all. Additionally, the entire operation was extremely well-coordinated and every move has been thought out in advance. These kids know what they are doing, and they are deeply serious about it.

Sam Graham-Felsen, a freelance journalist and documentary filmmaker, writes for The Nation.