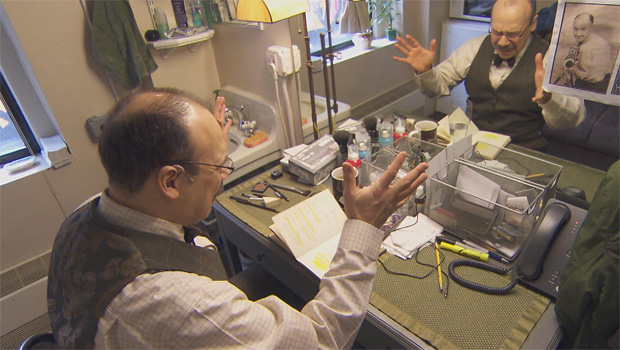 Broadway actors try to remember their lines well before opening night. And they all have their own ways of doing that. We asked Rita Braver to go in search of their secrets:

Even with five Emmy Award nominations for his work on the popular TV comedy, "Modern Family," even though he's been acting on stage since he was six, memorizing a new script can still traumatize Jesse Tyler Ferguson.

This time, it's just him in "Fully Committed," a one-man show he was still learning when Braver met up with Ferguson in a Broadway rehearsal hall.

Ferguson plays not only a harried matire'd in a hot New York restaurant, but also some 40 other roles! "I also play all the people calling into the restaurant, trying to score a reservation," he said. "I play the chef, I play the hostess, I play the business manager. I play Naomi Campbell's assistant."

Ferguson has been at it for six months.

What has he been doing to learn this script? "Well, eating lots of leafy greens to keep my brain sharp," he laughed. "But I haven't looked at the whole picture. I've looked at small chunks, because if I look at the whole 90 pages I have to learn, I would have to put myself into an insane asylum.

"But because I can allow myself just small chunks and I say, 'OK, today I'm gonna try and learn these 10 pages, and then the next day after that, I'm gonna learn those ten pages plus another five.'"

A few blocks away, Danny Burstein (with a Tony nomination for Best Actor in the hit revival of "Fiddler on the Roof") shares the stage with lots of actors. But the part of Tevye, a poor Russian Jew struggling to hold on to his traditions, is arduous.

"I'm on stage for three hours, except for 13 minutes of the show," he said.

"Have you ever known an actor who just picks up a script, reads the page and remembers it?" Braver asked.

"There are a lot of people like that," Burstein replied, but added, "I am not like that."

But after 16 Broadway shows and now six Tony nominations, Burstein has an established technique for learning lines, which, he says, has not made it any easier.

And he let Braver follow him to watch the year-long process.

"You can never be prepared enough," he said. "I don't like to leave anything 'till the last minute."

In January 2015, he's learning his lines for "Fiddler," while appearing in another Broadway revival, "Cabaret."

Braver asked, "Were you ever on stage performing 'Cabaret' and found yourself suddenly thinking about 'Fiddler'?"

"Why is it such a great place to learn lines?" Braver asked.

"Because everybody's in their own world," he said. "There's that noise from the train, and I disappear into the book."

Sometimes getting too caught up in an emotional scene: "You're standing there on the subway, with a lot of people that you don't know in a packed subway car, and trying not to cry. But that's my life!"

Jesse Tyler Ferguson also studies during his commuting time, Los Angeles style. "I look like a crazy person when I'm driving around in L.A., because I'm running my lines, talking to myself, using gestures and, like, screaming and then doing these different characters."

Ferguson was memorizing his Broadway role while shooting "Modern Family" -- those lines usually given to him the morning of a taping.

"That's the thing about TV," he said. "You hold your script in your hand, and then you put it behind my back, or behind a pillow or in a drawer and then you start the scene."

For Danny Burstein, learning lines is really homework. Last September, with the first rehearsal for "Fiddler" just a week away, he was running lines with his wife, actress Rebecca Luker.

"When I'm up there on stage, you know, she's up there with me," Burstein said, "and I think she would say the exact same thing."

Burstein reached his goal: he memorized the entire show before the first rehearsal.

Still, "Fiddler"'s director Bartlett Sher says that is only the beginning. "Learning your lines is like the first step to moving into the mind of the character," Sher said. "So the process of learning the lines is the process of transformation. It's the process of becoming someone else."

But Sher acknowledges one of Broadway's secrets: some well-known (and always unnamed) actors NEVER learn their lines. Years ago he found himself whispering into a microphone, connected to a tiny earpiece worn by an actor:

"I had a script and I would feed him his lines," Sher recalled. "The conversation between me and the actor knowing the lines was reading the signs as to when it looked like he didn't know what the hell was about to happen next!"

Danny Burstein wouldn't be caught dead wearing one of those earpieces, but he says that over a long career, even the most accomplished actor is bound to go blank.

Braver asked, "Have you ever forgotten a line?"

"You keep going," Burstein said. "People come to see a live performance. We're not robots. It hasn't been taped beforehand. That's the exciting experience of being there in the room -- it's immediate. You're right there with that person, and they're doing it live in front of you. Things like that happen."