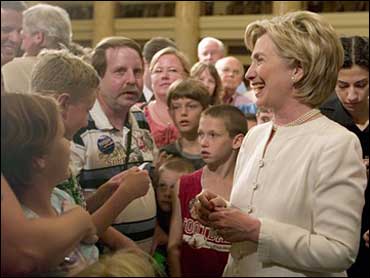 
Hillary Clinton is the most asked-about woman of all time. There have been more poll questions about her than about any other woman. And, since the polls also have given her status as the front-running Democratic candidate for president, that number is likely to grow enormously through 2008.

As of July 8, 2007, there have been 2,377 public polling questions that include the name "Hillary Clinton" or "Hillary Rodham Clinton" (plus six more where "Hillary" was misspelled "Hilary"). That's according to the University of Connecticut's Roper Center iPoll database, which has archived public poll questions and answers since the early days of scientific polling in the 1930s.

Usually, when pollsters ask about first ladies — and those who want to be first ladies — the questions are very simple, like: "Is your opinion of Elizabeth Edwards favorable or not favorable?" Questions about Hillary Clinton were much more pointed, even early in her husband's 1992 campaign. The Gallup Organization may have been the first polling organization to ask anything about her — and the question already pointed to presidential ambitions. It was: "From what you know and have read, who would make the better President … Bill Clinton, or his wife Hillary Clinton?" By about two to one (45 percent to 24 percent), in February 1992, Americans chose Bill Clinton.

The coupling of Bill and Hillary Clinton in that poll was matched with questions comparing the Democratic challenger with the incumbent president and vice president and their wives. Who would make the better president — George or Barbara Bush? There was no contest — 63 percent chose then-President Bush and 28 percent his wife. Vice President Dan Quayle led his wife Marilyn by just 45 percent to 30 percent.

Also in February 1992, the TIME/CNN/Yankelovich Clancy Shulman Poll put the Clinton presidential question directly: "From what you know of Hillary Clinton, do you think she has what it takes to be President of the United States, or don't you think so?" Just 19 percent of Americans thought she did, while twice as many, 40 percent, were sure she did not.

Those early negative assessments of Mrs. Clinton as a possible president have been replaced by generally positive ones today — for nine of the past 10 years, she has ranked as the country's most admired woman (losing to Laura Bush only in the immediate aftermath of the 9/11 terrorist attacks). And Americans, especially Democrats, think she has the right stuff to be president. According to a May ABC News/Washington Post poll, she led Barack Obama and John Edwards as the candidate with "the best experience to be president." Sixty-six percent of Democrats chose Clinton, 19 percent Edwards, and 9 percent Obama. In a January CBS News Poll, 57 percent of all adults said they thought Hillary Clinton "has the right kind of experience to be a good president." Thirty-four percent disagreed.

By the way, there is not a lot of polling evidence that how Clinton is referred to makes a major difference in poll results, although in recent CBS News Polls, she received slightly higher favorable ratings without "Rodham" in her name. The differences, however, are small and not necessarily significant.

The senator has used both versions of her name. On her Senate Web site, she is Hillary Rodham Clinton, while she is simply Hillary Clinton on her presidential campaign page.

Just over a third of the pollsters' 2,377 questions, 36 percent, use the senator's full name — Hillary Rodham Clinton. In the remainder of the questions, she is Hillary Clinton, without the Rodham. Pollsters tend to follow a person's preference when it comes to their names. So during her husband's 1992 campaign, none of the 107 poll questions used Rodham in identifying Mrs. Clinton. But after the election, when she made the change, and through 2006, nearly 40 percent of poll questions used Rodham when identifying Mrs. Clinton. Now, pollsters are adapting to her latest name change. Less than a third of the questions asked about Sen. Clinton now use "Rodham" as part of her name. She has once again become just "Hillary Clinton."

But that 54 percent sense of likelihood is probably more of a statement about whether the public thinks America is ready to elect one particular woman — Hillary Clinton!
By Kathy Frankovic