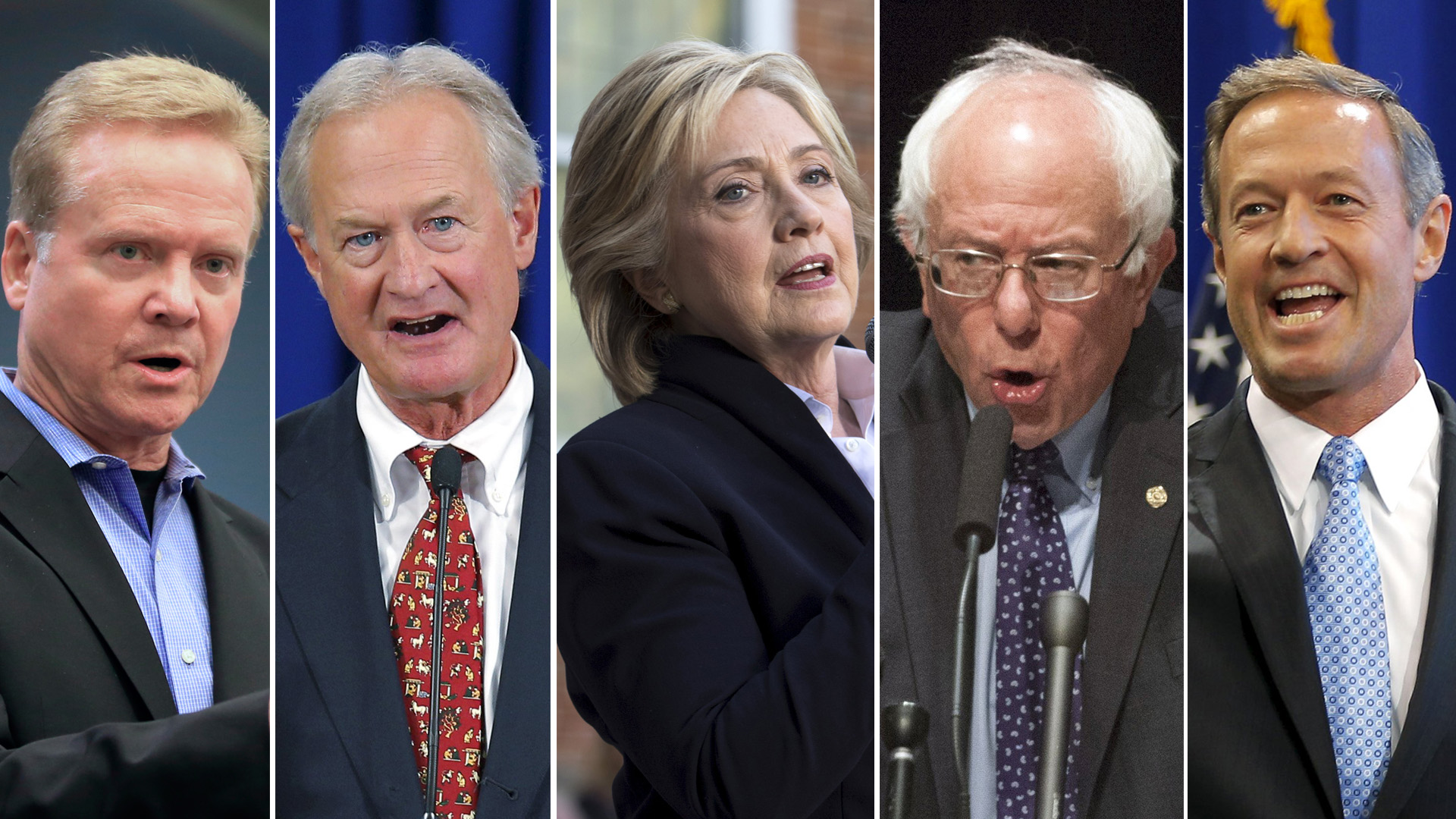 Five Democratic candidates for president will meet on the debate stage for the first time on Tuesday in Las Vegas, giving voters across the country their first opportunity to see the candidates side by side. More than 23 million people tuned into see the Republican candidates go head-to-head in both of their first two debates. It remains to be seen whether Democrats can get the same numbers to tune in for their debate, but nonetheless,Tuesday night brings big risks and big opportunities for Hillary Clinton, Bernie Sanders, Martin O'Malley, Jim Webb and Lincoln Chafee.

Here's what we're watching at the debate:

Who fires the first shot?

With their campaigns now passing or nearing the six-month mark, Clinton has consistently played nice with her main challengers for the Democratic nomination: Sanders and O'Malley. There have been few personal attacks launched between the candidates and instead only carefully worded, though sometimes thinly veiled, comments on policy differences.

O'Malley, who takes pride in "forging new consensus," has accused Clinton often of "following public opinion" on issues like immigration, the Keystone XL pipeline and, more recently, the Trans-Pacific Partnership.

"Unlike a weathervane that blows in the wind, I know where I stand," O'Malley told Chris Hayes in an interview on MSNBC last week, adding that he was against the TPP "eight months ago."

He accused Clinton of "bobbing and weaving and giving non-answers for most of this campaign" shortly after she announced her opposition to the pipeline. And on Sunday, O'Malley dinged Clinton again -- this time, on foreign policy.

"Secretary Clinton is always quick for the military intervention," he said on CNN's State of the Union when asked about Clinton's call for a no-fly zone over Syria. O'Malley opposes a no-fly zone.

O'Malley's comments are arguably the harshest words uttered between candidates on the Democratic side. While Sanders does not shy away from contrasting his vote against the Iraq War with Clinton's vote for it -- a point his campaign made again Saturday with a press release on his "foreign policy experience" -- he often starts any comments about Clinton with a caveat.

"I have a great deal of respect for Hillary Clinton," Sanders said recently in an interview with NPR, echoing earlier statements. "I'm not going to tell you we are bosom buddies but we're friends, we have known each other. We served in the Senate together."

Sanders often says that he has never run a negative ad and that he doesn't want to start now. In preparing for Tuesday, a senior campaign official told CBS News recently that Sanders is spending most of his time reviewing the event format, policy and how to respond to likely questions instead of staging more elaborate mock debates.

Clinton, for her part, has so far reserved her strongest critiques for the candidates on the Republican side of the race, preferring to frame this election as a choice between Democrats and Republicans.

Mo Elleithee, the executive director of Georgetown University's Institute of Politics and Public Service, said the way Clinton handles the incoming -- from her fellow candidates and the moderators, who may question Clinton's record -- will be "telling" as she makes her case for the first time on a stage this size.

"Can she brush it off?" said Elleithee, who served as a spokesperson for Clinton during her last presidential run. "You don't ignore everyone else on the stage but, at the same time, if it just gets into a back and forth, tit-for-tat, then it's a missed opportunity."

Elleithee said that the "opportunity" for candidates to give a clear explanation of why they, over the other candidates, would best represent the people watching is vital for success in this election.

A spokesperson for O'Malley, Haley Morris, declined to elaborate on his debate preparation but told CBS News that he wouldn't hesitate to "make the distinction."

When CNN announced the criteria that the candidates must meet in order to participate in the debate late last month, the network left a door open for Joe Biden. Because he is polling in double digits -- far above CNN's 1 percent threshold -- the vice president would be allowed to debate if he filed his candidacy with the Federal Election Commission, or publicly stated that he would do so, on or before October 14. CBS News' Julianna Goldman reports that Biden, who spent the weekend with his family in Delaware, is very close to deciding, but will likely not participate in the debate.

A new CBS News poll released Sunday showed that Biden draws support from Clinton fans; and her numbers go up when his name isn't polled. In recent public appearances, Biden has provided a sliver of a preview of what his positions on a variety of issues might look like and how he compares with Clinton.

For example, Both Clinton and Biden addressed the Human Rights Campaign in Washington on the same day and both voiced support for upgrading the service records of men and women who were discharged from the military for being gay or lesbian.

"'Don't ask, don't tell' is over," Clinton said. "I can't think of a better way to thank those men and women for their service than by upgrading their service records, and making sure they get the honorable discharge they deserve."

Biden followed Clinton, saying that he and the President are "working on" those upgrades.

"More and more of our heroes are getting honorable discharges they rightly earned," Biden said, raising his voice above the applause.

But the conclusion of the negotiations over the TPP last week exposed a glaring difference between Clinton and Biden. As secretary of state, Clinton advocated for the agreement and called it the "gold standard of trade agreements."

But last week she announced her opposition to the deal, because of the lack of controls on currency manipulation and the treatment of pharmaceutical companies and their patents, which she thinks favors big PHARMA over consumers. Biden supports the deal and will fight for its passage in Congress.

The second Democratic debate is set for November 14 in Des Moines, Iowa and the hosts, which include CBS News, have not yet released the criteria for candidates who wish to participate. But Biden may need to make a decision before that date -- two states have primary filing deadlines in the first two weeks of November, according to the University of Virginia's Center for politics.

The Democratic candidate who won't be on stage

Larry Lessig, a law professor at Harvard, launched his campaign last month after raising $1 million to back the singular purpose of his bid: campaign finance reform. Lessig won't be on stage Tuesday night because he fails to meet CNN's polling requirement.

"The debate criteria worked well for politicians and billionaires," he said in an interview with CBS News. "If you're a billionaire, you can afford to spend a year or two years getting the name recognition necessary to get a 1 percent and if you're a politician, you can get paid by the government while you run for president."

Lessig said that rules should instead consider a candidate's "viability," something he said his campaign demonstrated by raising money faster, going on the air with ads sooner and hiring key staff before Jim Webb and Lincoln Chafee, who both qualified for the debate. Webb has not yet released his first fundraising report.

Lessig said he would now focus wholly on getting into the second debate.

He has said the Democratic National Committee could help by welcoming him to the race and, in turn, signaling to the media and pollsters that he is a legitimate contender. A spokesperson for the DNC, Holly Shulman, told CBS News that the DNC has treated Lessig fairly.

"Lessig and his staff were briefed by DNC staff on the ballot and delegate process, as offered to all Democratic presidential candidates and potential candidates," Shulman said in a statement.

O'Malley, before and after

Despite spending more days in Iowa than any other candidate, O'Malley has struggled to get his poll numbers out of the single digits.

Cornell Belcher, who was part of Barack Obama's polling team in 2008 and 2012 and now runs his own strategy firm, said that the stakes are especially high for O'Malley because of the faith he has placed in the debate to get his message out.

"If there's a future for O'Malley he's got to have a Carly Fiorina moment where people notice him," he said, referring to Fiorina's rise from the first "undercard" debate to a memorable performance on the main stage in the second debate, "or he's going to languish."

Belcher noted that, despite O'Malley's effort and experience as the mayor of Baltimore and governor of Maryland, he has earned more attention for his railing against the debate schedule than for his policy proposals.

Asked on Wednesday if the debate marked a "make or break" moment for his campaign, O'Malley said it was an important juncture for every campaign.

A powerful performance could help O'Malley in the polls and also in his campaign's pocketbook. His rivals, Sanders and Clinton, both announced that they each pulled in over $20 million in the 3rd quarter, which will allow them to stay on the campaign trail long after the first debate. O'Malley's campaign has not yet announced its fundraising total.

On the other hand, Belcher said a poor performance could mean something else for O'Malley.

"Turn off the lights," he said.