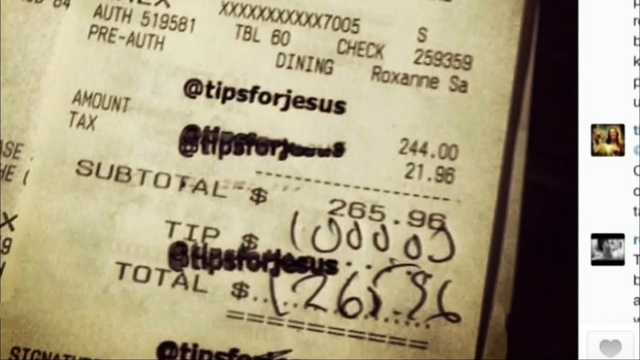 SAN FRANCISCO -- A mysterious trend where diners leave generous gratuities with the saying “Tips for Jesus” has happened again in San Francisco. This time, a man left behind a tip worth thousands at a sushi restaurant in downtown,

Hilary Hesse, who works at the restaurant Roka Akor, waited on the mystery man at a back corner table Tuesday night. The waitress told CBS-affiliate station KPIX 5 that he left the restaurant before she knew about the $3,000 tip.

According to Heese, the man’s bill was $147. He also picked up the tab for people dining at a neighboring table.

“I was actually at the table telling them he had paid for their meal. And I peripherally opened up the credit card holder, looked down at it and my jaw just dropped,” Heese recalled. “And they said, ‘Did he take good care of you?’ And I said, ‘uh huh.’”

Heese said, “First, I think that he doesn’t know how to use the decimal point and that it was actually $30. And then I looked closer and…Oh, my God…”

At the top, he wrote “Tips for Jesus.”

This is a phenomenon that waiters and waitresses are experiencing all around the country. A generous customer drops thousands of dollars at a time, scribbling the saying on the receipt.

Who is this generous customer? Recently, the blog Valleywag reported the diner is Jack Selby, a former vice president of PayPal.

The waitress said she was not allowed to comment on the identity of the tipper. Whoever he is, Heese said she wishes she could tell him thanks and to sit in her section again.

Roka Akor said the tip will be split among the wait staff, which is the restaurant’s policy.