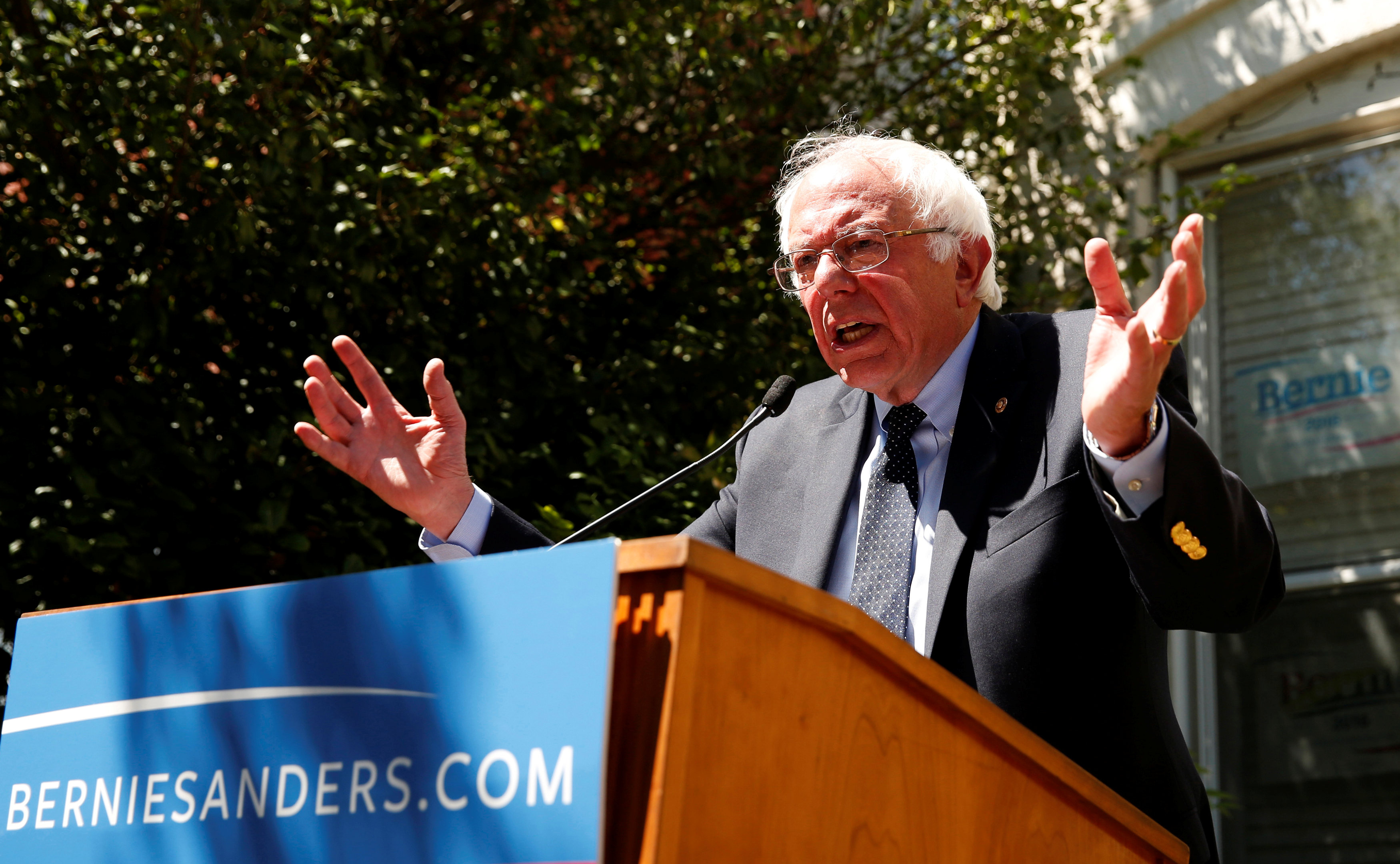 On the afternoon before an Iowa Democratic Party dinner in July 2015, Bernie Sanders firmly gripped the podium at a press conference, and referred to himself as an "underdog." He was closing the gap with Clinton in the polls -- he had gone from being 40 points behind to almost 20 points behind. Sanders stood in front of a stained glass window, and the sunlight streaming in was so intense that the different colors in the glass blurred together.

"We are going to be outspent in this campaign, but I think people all over this country are responding to a very simple message and that is that it is not acceptable that the middle class is continuing to disappear," he said to a room of mostly veterans in Cedar Rapids. One of the folks who stood behind Sanders in solidarity was the young veteran who had created "Veterans for Bernie." He described the senator as "a candidate of a lifetime."

Seventy-four-year-old Socialist Sanders was written off early by most pundits, yet grassroots groups like Vets for Bernie started popping up all over the country. He was suddenly gaining a large and passionate following. In the months that followed the Sanders campaign recognized that its biggest supporters were younger voters.

"Do you know what the average contribution is?" Sanders would ask crowds at almost every rally. They always knew.

Many of the donors were young, too. The tightly knit team behind the 74-year old's progressive platform hadn't planned for these supporters -- nor had they expected or prepared for the level of success they achieved.

"We didn't have a clue about the generational gap at all until we went to Oregon, and we said, "Wow, it is a cross section, but it sort of veers much more to the younger people" she recalls. "And we just kept on being surprised by that."

The youthful energy created an unexpected cultural phenomenon. And in the end, Sanders would amass more individual donations than any previous presidential campaign -- ever.

Campaign manager Jeff Weaver said he was surprised by the "intensity" of Sanders' fans. "The magnitude of support from younger voters was certainly gratifying and a little surprising."

The Sanders team quickly tried to adjust to the outpouring of youth support. That was clear on his campaign stops in Iowa -- many of them on college campuses, and some featuring performances by popular bands like Vampire Weekend.

Sanders lost to Clinton by less than one percent in Iowa. He beat Clinton in Johnson County, dominated by college students, by almost 20 points. His successes among voters rippled into other states. Sanders went on to win among voters under 30 in almost every state where exit polls were conducted -- Alabama and Mississippi being the only exceptions. In the end, Sanders got a larger share of the youth vote than Obama did in 2008.

The landslide New Hampshire victory finally put the campaign in a different frame of mind. "It gave us confidence that we could fight," says Jane Sanders. She calls the New Hampshire blowout "humbling, moving and surprising."

But then came Nevada, where the Sanders campaign suffered some setbacks. The original state director quit in early November due to a family emergency. In the end, Sanders lost Nevada by about a 5 percent margin.

Weaver acknowledged it was "certainly a challenge" to line up an A-list team in every state when the Clinton campaign had hired most seasoned operatives.

And there was a certain irony at the very heart of the campaign: Sanders' inner-circle primarily consisted older white men who, like Weaver, had known him for decades, while his real support base was among the young, a group they had trouble relating to.

"For better or for worse we are a pretty small group of trusted individuals that Bernie, relies on and we have had a lot of young people involved," Jane Sanders explained. The average age of these insiders was decades older than the core base of Sanders supporters. And many decisions were made in hotel rooms and on the campaign planes where, most times, there were no younger field staffers.

When the Sanders campaign's leadership was caught off guard by his win in Michigan in March -- a state he won by less than 2 points after being down in the polls for weeks -- they look frazzled, while younger staffers taped up Bernie Sanders posters to a podium situated poolside at a hotel outside of Miami. Earlier in the day, Sanders had fled the state for a rally in Miami, where he did not utter the word "Michigan" even once, a testament to how surprised his campaign was by his success.

On some levels, Sanders himself had moments when he tried to adopt the mores of millennial culture. He went from awkwardly leaning off the stage and haphazardly touching fans' hands -- to taking selfies and making a point to take photos with teens who were celebrating their birthdays.

He periodically adopted a more playful tone. When Larry David began to imitate him Sanders on SNL and said that he only traveled with one pair of underwear Sanders, surprisingly, answered a question on the topic.

"Do you have more than one pair of underwear?" CBS News asked him on a fall day in Iowa City after he wrapped a house party. With that question, his communications director tried to end the gaggle. Sanders cut him off.

"No, no. This is a serious question," Sanders said. "And yes, last week I bought my second pair of underwear. That is a joke. Don't write it down -- that was a joke. I have ample supply of underwear."

But Sanders, surrounded by his older team of advisers, did not fulfill all the wishes of his supporters, particularly those who wanted him to be out front-and-center protesting Donald Trump.

"I definitely think he could have embraced the culture a little more of protesting," explained Jamal Green, who helped shut down a Trump rally in Chicago last March. "He should have been that radical guy," Green added, saying that doing so could have helped him win the Illinois primary, which he lost.

Sanders' top aides never wanted the campaign to be defined as an anti-Trump movement, though.

"I think young people, by and large, are anti-Trump and they should be anti-Trump. The truth of the matter is that Trump buries himself every time he opens his mouth," Weaver explained. He said the way to beat Trump was to get Americans to vote for someone else.

Green, a 20-year-old activist and musician, had hoped that a song he wrote entitled "Feel the Bern" could be one of the campaign's theme songs. He was even set to perform at Sanders' final rally in Chicago, an appearance that was nixed when the campaign found out about his involvement in the Trump protest. Simon and Garfunkel's baby boomer classic "America," meanwhile, became the campaign's go-to anthem.

Jane recalls sitting down with Sanders and Paul Simon during the summer of 2015 to talk about songs they could use for the campaign. "America," from 1968, was perfect. And when they set it to their now-famous ad they took out Sanders' voiceover - the images of farmers and working Americans, they hoped, would speak for themselves.

An earlier version of this story incorrectly stated that the Nevada state director had been fired. The story also included an anecdote about the way ties were decided in the Nevada caucuses which was also incorrect. The story has been updated to reflect these changes.