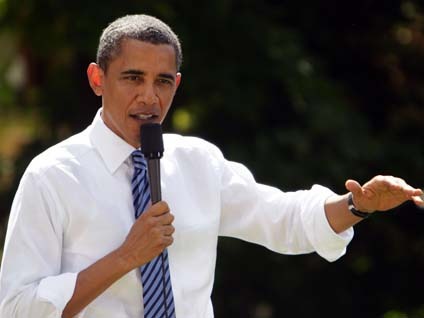 President Obama has been getting a lot of heat from conservatives for a quote in Bob Woodward's new book. It reads: "We can absorb a terrorist attack. We'll do everything we can to prevent it, but even a 9/11, even the biggest attack ever ... we absorbed it and we are stronger."

The quote screams for context--if for no other reason than its use of ellipses--but the president's critics weren't waiting for it. John Bolton, ambassador to the United Nations during the Bush administration, said the comment suggested the president "doesn't care about Americans dying." Mark Thiessen, a speechwriter in the Bush White House, called it "stunningly complacent." Liz Cheney said: "This comment suggests an alarming fatalism on the part of President Obama and his administration. Once again the President seems either unwilling or unable to do what it takes to keep this nation safe."

I asked an administration official familiar with the interview to provide me with context. The president was talking with Woodward about the national-security threats he faced upon becoming president--the possible dangers and the fact that the terrorists had to be right only once, whereas the president and his team had to be right every time.

This led the president to talk about the need to prioritize. Objectively, the president said, you would want to be able to stop every attack, but a president has to prioritize. So what does the president put at the top of the danger list? A nuclear weapon or a weapon of mass destruction. Why? Because--and here's where the quote in question comes in--as bad as 9/11 was, the United States was not crippled. A nuclear attack or weapon of mass destruction, however, would be a "game changer," to use a popular cliché.

This line of reasoning is identical to what I heard regularly when I covered the Bush White House. Moreover, it was the realism of Liz Cheney's father, former Vice President Dick Cheney, who said: "We have to assume there will be more attacks. And for the first time in our history, we will probably suffer more casualties here at home in America than will our troops overseas."

I remember being a little shocked at how brutal the calculus was when I heard officials in Cheney's office involved in the national response to terrorism say that they had to focus their energy first on "mass casualty" events. What were they talking about? The same thing the president was: a nuclear attack or one that used a weapon of mass destruction.

More from Slate:
Decoding Christine O'Donnell
A visit to Ohio shows how hard it will be for the Democrats to motivate voters
The evolution of the race card in American politics
John Dickerson is a CBS News political analyst. He is also Slate's chief political correspondent and author of On Her Trail. You can also follow him on Twitter here.