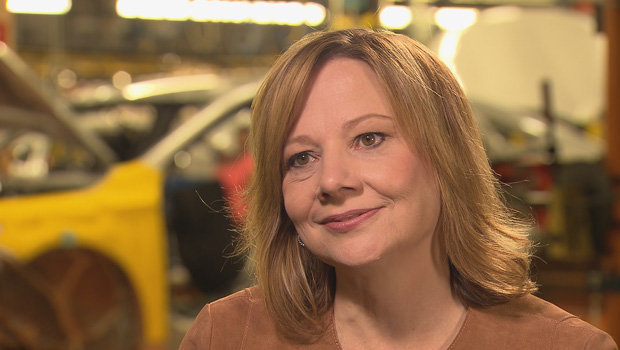 General Motors has manufactured more than 500 million cars over the years. The company is celebrating that milestone this week after some recent reverses ... and with a relatively new chief officer in the sdriver's seat. Anna Werner paid her a visit:

We met CEO Mary Barra on what for her is familiar ground: the Detroit-Hamtramck assembly plant she once managed.

"You used to run this plant -- what's it like to come back as CEO?" asked Werner.

She has spent her entire career with the company, and people like Ed Fleming look at her as one of their own.

"Real proud of the fact that I had interfaced with Mary early in her career, and then to see her make it to that level of the organization, was absolutely phenomenal for us," said Fleming.

Fifty-three-year-old Barra took over in January 2014, making her the company's fifth CEO in six years -- and the first woman to run a major automaker.

Barra started at GM 35 years ago as an 18-year-old intern, then worked her way up from engineer to vice president, getting an MBA at Stanford along the way.

One of her jobs was head of human resources, where she was famous for cutting down GM's 10-page dress code to just two words: "Dress appropriately."

But Barra didn't envision her own future including the top job. "The CEO position was never something that, you know, five years or two years ago I said, 'Oh, that's what I want to do,'" she said.

"Never? Never thought about it?"

"Well, one of my core principles is whatever job you're doing, just own it and do it like you're going to do it the rest of your life," she said. "Because that's what I tell people: do your best and good things happen."

But not always. Just weeks into her new job, Barra faced one of the biggest challenges in GM's history: recalls that would eventually total more than 30 million vehicles.

The most significant recall: 2.6 million older Chevy Cobalts, Saturn Ions and other vehicles with suspected ignition switches that made airbags inoperable -- a defect now linked to 90 deaths and 163 injuries.

Barra was grilled by members of before Congress about what happened:

Werner asked Barra, "Had you ever testified before?"

"Ah, y'know, it's, it's difficult. But it was a very serious situation, and there were questions and issues, so we worked hard to focus on the customer and be transparent, and do the right thing."

But those promises haven't won over GM's critics, including consumer advocates and some Democratic Senators, who stood with victims' families last month. They point out that the compensation fund will only cover some of the victims from recall-related crashes.

Werner asked, "Are you willing to expand the compensation program? Are you considering that?"

"We extended it one month, to make sure that everyone had the right information and time to be able to participate," said Barra, "and that's what the program will be, and we're not considering any other changes."

"Again, I think when we look at the extraordinary steps we've taken with the recalls that we did last year, the safety changes we've put in place and the way we design and engineer our vehicles, I feel that we are a very customer-focused company and, again, on a journey to be a defect-free company," Barra said.

There was a time when GM's future was not in question. For decades, it was a titan of the auto industry, the symbol of American industrial might, producing iconic cars like the Chevy Corvette and the Camaro.

At one point, GM sold more than half the cars on the nation's roads.

But the company lost its way. And before long, sagging sales, high labor costs and lackluster designs began to take their toll.

Then came the financial crisis. GM filed for bankruptcy.

President Obama appointed financial manager Steve Rattner to organize a bankruptcy, and subsequent government bailout, for General Motors. "It was stunning, it was truly stunning what we found in 2009," said Rattner.

He saw another reason for the company's troubles: "GM had arguably the worst culture of any major company I've ever been around in 30 years," he told Werner. "It was bureaucratic, it was slow-moving, it was a 'get along, go along' culture."

In fact, GM's internal report on the recalls described how employees would agree to a plan with no intention of following up -- something called "the GM nod."

GM shed its Saab, Saturn, Pontiac and Hummer brands. While the company returned to profitability in 2010, Rattner says there's much more for GM and Mary Barra to do: "They need to have their cars thought of as the next cool thing. They've made some progress, good progress, but there's still a ways to go."

"They're not the next cool thing yet?" asked Werner.

"They're not really cool yet," he replied.

One program Barra is supervising to heat things up is the continued overhaul of the Buick brand -- for years, seen as your grandmother's stodgy sedan ...

GM is also emphasizing the latest technology, with WiFi in its cars; an all-electric vehicle for 2017 called the Bolt; and coming soon: Super-cruise, which will let drivers take their hands off the wheel, some of the time.

Executive Alicia Boler-Davis admits the company is playing catch-up: "Well, I think in our past, sometimes we thought we knew what the customer wanted. What's different now is that we're starting with the customer and we're asking them, we're getting their feedback."

Mary Barra has gotten personally involved, sometimes dropping by local dealerships to hear from customers ... even making the occasional sales pitch, to customers looking at the Equinox. "Great vehicle, great vehicle," she said. "It's a nice size, it's got a really good turning radius, great fuel economy, it's got great ratings overall."

And she's brought a bit of her own philosophy to the top job: this mother of two teenagers has told employees that to succeed long-term, they need to balance their work and family lives.

Barra has informed meetings that they would end at 5:30 because she has to get to her daughter's soccer game. "I think it's a good message," she said. "One, let's get our work done ... be efficient and do that, but second, family is important, my children are important, and there are key events in their life I want to be a part of."

"So how many hours of sleep a night do you get?" asked Werner.

"Well it depends, but I try to be very balanced, because I think it's not a sprint, it's a marathon."