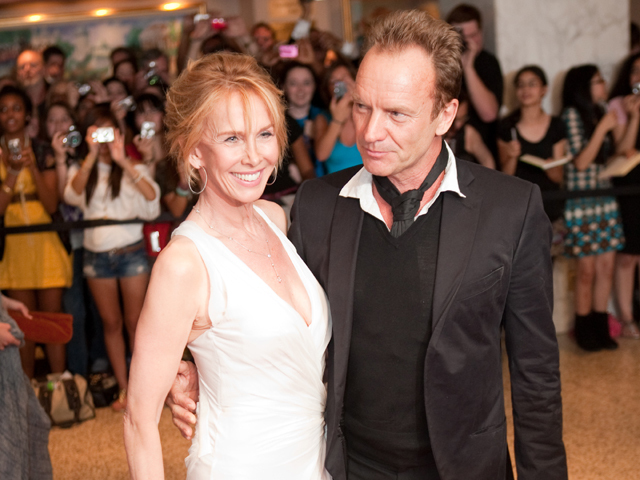 (CBS) Marital satisfaction - what's the secret? For Sting and his producer-actor wife, Trudie Styler, love is a given but sex is absolutely essential. And sex therapists agree.

"If you're not having sex, you're just roommates," Dr. Ian Kerner, a New York City-based sex therapist, tells CBS News.

In Sting's case, we're not talking not sweet, romantic sex. As the glamorous couple reveal in an interview in "Harpers Bazaar," they like to keep things down and dirty even after 18 years of marriage.

"Romantic? We like tawdry," the 59-year-old singer and father of six told the magazine.

"I don't think pedestrian sex is very interesting," he said. "There's a playfulness we have; I like the theater of sex. I like to look good. I like her to dress up. I like to dress her up."

And the magazine says the couple like to change the scenery as well as their attire, making a point to indulge in exotic rendezvous at hotels.

The couple often spend weeks when they don't see each other. But for Sting, whose hits include "Don't Stand So Close to Me," separation only fuels their passion.

Dr. Kerner says there's truth in the old saying "absence makes the heart grow fond." Unlike Sting and Styler - whose careers force them to be apart - "regular" couples may be unable to avoid seeing each other on a daily basis. But that doesn't mean their relationships can't benefit from time away from one another.

Says Kerner, "There is a big trend in couples taking separations and doing things separately with friends," and girls' and guys' nights out can be a good thing.

"The more you can be a strong individual, the better you will be in the relationship," he says.

Just don't take your partner for granted. Sting doesn't. He said that for all his wealth and fame, he knows Styler could leave him for another man - if she could find someone to top him.

Observed Sting, "He'd have to be very rich and very handsome."