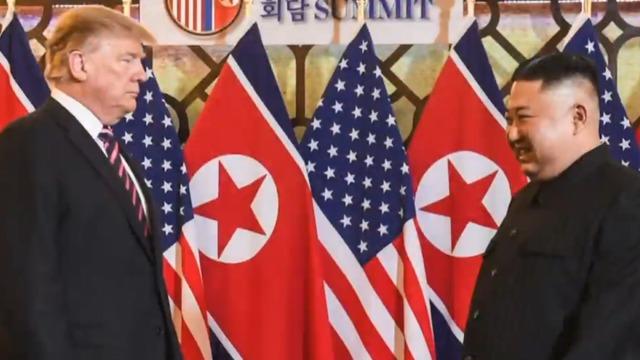 After talks at an historic second meeting with North Korean leader Kim Jong Un collapsed, a lot of work remains ahead to disarm the regime.

1. Was there an agreement to denuclearize?

It was hoped the summit would yield a roadmap towards denuclearization. But despite months of talks, the two nations have yet to agree on even what the word means.

In the talks, North Korea asked American negotiators for economic sanctions to be lifted in exchange for shutting down the regime's main Yongbyon nuclear facility.

But the offer fell short of American negotiators' demands, they say, who want access and monitoring of the rest of Kim Jong Un's nuclear facilities.

"Sometimes you have to walk," the president declared at press conference following the talks.

2. Will tensions escalate between the U.S. and North Korea?

President Trump said the end of his conversation with Kim Jong Un was friendly and has urged diplomats to continue talks.

Neither side walked away empty handed. The North Koreans have agreed to maintain their freeze on nuclear and missile testing and the United States has paused major military exercises.

"I trust him and I take him at his word," President Trump said of Kim's promise not "to do testing of rockets and nuclear."

And the regime's missiles could threaten America's West Coast, which is why a halt to testing matters. North Korea has yet to perfect launching missiles capable of flying that distance, armed with a nuclear warhead.

4. Has North Korea gained a seat on the world stage?

Kim Jong Un is no longer the isolated leader of a rogue state.

Despite sanctions that continue to choke his economy, Kim was treated as an equal of the president of the United States at their summit.

5. What is President Trump's personal relationship with Kim Jong Un?

President Trump has stressed that the good chemistry he has built with the North Korean leader is at least one achievement from their dialogue, even calling Kim Jong Un a friend.

But the president's trust in the North Korean leader, even saying he did not hold Kim responsible for the brutal treatment of American student Otto Warmbier, has elicited fierce criticism.

"He tells me he didn't know about it, and I take him at his word," President Trump said in Hanoi.

Warmbier's death is just one of the many human rights abuses carried out by the dictator's brutal regime.

For the latest news and analysis from Washington, don't miss "Face the Nation" this Sunday. Click here to check your local listings.

Major Garrett and David Becker on "The Big Truth"

This week on "Face the Nation with Margaret Brennan," September 25, 2022
Thanks for reading CBS NEWS.
Create your free account or log in
for more features.
View CBS News In
CBS News App Open
Chrome Safari Continue
Be the first to know
Get browser notifications for breaking news, live events, and exclusive reporting.